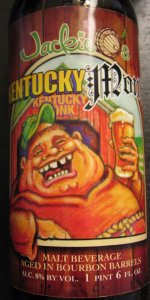 2020 12.7 ounce bottle poured into a DFH tulip. Small head over a dark orangish body. Definitely smell the barrel along with bourbon and malt and a toffeeish sweetness. Taste reflects the smell but a strong sweetness, surely from the honey, intrudes. I can't tell is this is a bad thing or not but I believe this is mischaracterized as a tripel. It's something else, maybe a Belgian strong pale ale or medium dark ale. This isn't to denigrate this at all, which is a very pleasant experience particularly because the booze is understated. But someone trying this expecting a tripel is getting something else beyond doubt. Mouthfeel is just fine for a sipping beer.

Although I enjoy barrel aged beers a great deal, particularly how Jackie O's does them, they in essence create hybrid beers like the doodle craze with dogs. In both cases the end product pleases the consumer but this calls for the styles to reflect that so that there are reasonable expectations.

12.7 ounce bottle, 2020 vintage, 14.2% ABV. Served in a Teku, the beer pours a slightly hazy orange/amber color with not quite an inch off-white head. Head retention is decent, and there's a small amount of lacing. I like the aroma, the brew smells like vanilla, bourbon, honey, stone fruit, caramel and bready malt. I think the taste is similar to the aroma, but there's also the addition of some candied orange, oak and coconut flavors. Mostly sweet tasting but there is a hint of bitterness in the finish. Mouthfeel/body is medium/full, it's a bit coating and is easy to drink with a moderate amount of carbonation. I thought this was pretty good, definitely worth picking up!

I wasn't expecting it to carry over but holy shit this tastes very distinctly of peach schnapps! There's also some brandy-like heat, caramel corn, and, just damn! This is really unique! Wtf is this? I'm getting a hint of orange zest, while parts of this reminds me of the recently released Northern Hoser Exposure, with the hints of green apple that I'm also getting. However, as of now, Kentucky Monk is way better.

Medium to full bodied with a semi-dry finish that tingles on the way down, but a thick fizz allows you to fully enjoy the complexities through the heat--something not many of the higher ABV Jackie O's brews afford.

A: Poured into a snifter to a deep golden orange topped by a finger of dense white head that fades quickly to a collar around the edge of the glass with minimal lacing
S: Smells of fruity alcohol with a little spice and some hints of caramel and vanilla. Very faint nose on this one
T: Taste is bourbon barrel up front with some fruity esters and spice. There's some nice wood, vanilla and caramel that riffs well with the base beer. Swallow is more fruity esters and spice with some lingering caramel and vanilla.
M: This beer is on the lighter side of medium with soft yet adequate carbonation. The beer has a dry finish which is to be expected for the style.
O: Overall this is a really nice beer. The bourbon barrel does some really nice things with the base beer. It reminds me a lot of curieaux from Allagash. Definitely one to try if you're a fan of the style and this one holds up well to aging.

T: Sweet initially. Sweet caramel, sweet breads. Like shortbread I guess, that's the best way I can describe it. Bourbon barrel poundcake? Touch of cloves in the middle and finish with more sweetbread. Turns a little dry in the finish with cloves and oak primarily. Light little touch of toffee.

O: Interesting transition in about two years. It is wayyyy less hot and harsh. However, the bourbon flavors are still strong, just different. Really not much of a tripel presence at all still. Not much in the way of belgian yeast at all other than a pretty subdued spiciness. I actually did not change the scores at all. It's about the same overall. Very different, but equal?

A: A nice murky brown pour with a bit of reddish highlights in it. Small/Medium-sized slightly off-white head. Despite the smallish head the retention is surprisingly good. Lacing is pretty solid too.(4)

T: Again, tons of bourbon. Lots of sweet caramel, molasses, brown sugar and vanilla. Perhaps some toffee and earthy notes in there. Plenty of oak to go around too. Even has a bit of a bite from all of the bourbon. Not much to mention on the tripel side, maybe a bit of bready yeast and some spices, mainly pepper. (4)

M: Medium-bodied, a touch drying and a little bit of a bourbon sting.(4)

O: Wish I had sat on it a bit to let the bourbon subside. Definitely a beer for the bourbon lover, it's loaded with it. I never would have guessed that there was a tripel under it though. At least it tastes like good bourbon!(4)

2012 Bottling, bottle 155/360, from an old BA friend (thanks Steve!) into my Jackie O's tulip...interestingly enough, received from the same guy!

S: Big fruity sweetness, with vanilla and oak, brown sugar and caramel. Bready malt backbone, with enough of a yeasty undertone to remind you its Belgian. Slight mandarin orange and orange peel and lemon zest in the fruity esters, with a hint of spice and faint bourbon & booze...pretty floral as well.

T: Lightly spiced orange and caramel/brown sugar...the bourbon, vanilla and oak are all there, but not in-your-face. Bready Belgian notes and minimal heat, this seems to be a good age for this one.

MF: Medium bodied and thinner at that, with enough carbonation for me. Alcohol heat is negligible. No complaints here, and I have read lots of negative reviews regarding this aspect.

Reviewed as part of the Blind Beer BIF. 22oz poured into a snifter

Notes of citrus but certainly not a dominating scent. It might be an off night for the sniffer but I swear I'm getting a faint amount of something like peanut or pecan. Definitely a nut. A little oak and vanilla in there also. An odd nose for sure, but not off putting in any way. It's a Belgian style of some sort, maybe. Triple?

Starts off with a nice tartness, some floral with accompanying stone fruit in the background. A little peppery, so I guess this could be a saison. Shit, I am helping myself narrow this down. Finish takes a different turn, smoothing out with a caramel-esque flavor. I am so confused right now

Easily the most lost I have been on a blind beer. The beer is an odd ball and I'm all but certain my guess will be well off. Final answer will be an oak aged triple from an American brewery

Reveal: Jackie Os Kentucky Monk. I am honestly surprised I was that close. I guess the sweet finish was the honey added. Obviously didn't get any bourbon but at least thought it had some barrel aspect. Such a fun beer to try blind. Thanks nlmartin!