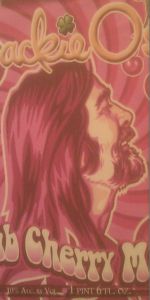 Can't remember who traded this to me, but it was consumed September 2017.

Pours a lot darker than I was expecting, looks like Oude Tart, like this is legit black, but not stout viscosity. Not much headspace, makes a beige/light brown head 1/4". Aroma was kinda similar to Oude Tart, had the dark cherry sour stout like vibe going for it. I'm leery of double digit sours (or beer in general) but this didn't affect the nose of dark cherry, roasted malt and more of a walnut like woody presence as opposed to oak. Wet oak = walnut almost.

Taste was an enjoyable, dark flanders like experience. Less earthiness even though it is bigger than flanders, more sourness, but not excessively so. Still finding the alcohol to not be rearing its hot ugly head. Carbonation was on point, always nice since I had sat on this bottle for a year or two.

Ultimately I liked this beer, but it was too close to Tart of Darkness, and therefore, it kind of has its niche already covered by a more enjoyable, easier to get/cost etc. beer that does similar things. Definitely tick it though, its good, prolly better than Magdura bc cherries.

The aroma has a nice cherry note but the cherry component is much diminished in tasting. Light-moderate tartness with a light bitterness in the finish. Slightly boozy.