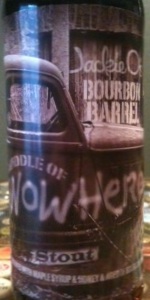 Black with clear red edges and a tan head settling to a sparse film and fuzzy ring.

Up front some mild roast and bourbon oak quickly transform into distinct notes of orange honey chews, licorice and molasses. These flavors don't last as woody sharp whiskey overpowers everything.

The medium-light body has a crisp fizz and a semi-dry, hot ass swallow.

S: Mellow bourbon, chocolate, and vanilla. Odd tartness to it.

T: Woah, this is infected. Very sour and vinegary with an astringent bite at the end. Tartness really blocks most other things out.

O: No idea what this could have been if it wasn't infected. Really thin in body though, despite whatever happened. What a shame :(

Pours jet black with a small brown head. Spotty lacing down the glass with a tad bit of retention.

Lots of things going on in the aroma. Tons of fudge, dark chocolate, vanilla, oak and a touch of smoke to go with some heavy roasted malt. Bourbon and maple syrup are present, but not overpowering.

Unfortunately the flavor does not live up to the rich, complex nose. Still a ton of chocolate and roasted malts in here, but the sweetness takes over and swings the balance. Don't get a ton of maple syrup, but the honey overpowers everything else and creates a weird combo with the barrel notes which are much too subdued for my tastes.

Medium bodied and good carbonation levels, but the beer is a touch thin. Still finishes somewhat roasty and dry, but with the honey sweetness adding to that the combo just doesn't work.

Interesting concept and something that sounds great on paper, but the execution here didn't do it for me. If they could actually make something that tastes like this smells, I'd be all in. As it played out, this was just a thin, honey sweet jumbled mess.

Poured into a snifter...

A. Like most stout...inky black with a half finger medium brown head. Head is just a touch loose and lacing is somewhat spotty. Still, it's a good looking stout.

S. Oh wow, great bouquet here. Heavy doses of brownie batter, vanilla, honeycomb, oak char, and coffee. The maple syrup is there but it augments the nose more than anything else, I really get mostly honey and treacle for the lighter notes. Pretty good amount of dark fruit on this one. Barrel adds some char qualities and some sweetness from the bourbon, but it is very subtle which, for this beer, is a very good thing. Outstanding nose.

T. Chocolate, caramel, and honey. A lot of toasted malt characteristic, very roasty. Not particularly sweet, the chocolate notes are mostly of the baking variety and have a certain amount of bitterness. Not really picking up the maple syrup, but the honey is certainly there, as is a light tannic quality that seems to pervade every Jackie O's barrel aged beer I have had. It's like a high, sour sweetness that is either the bourbon, the honey, or a mild infection. Hard to tell, but I'm not the biggest fan. It covers up the chocolate and malt flavors and really makes this one a bit thin.

M. Moderate bodied and well-carbonated. But the finish on the flavor is just very puckery and thin. The roasted qualities fall off dramatically and you are left with a drying, sweetness that just really doesn't work. Would have enjoyed a more robust mouthfeel.

O. Bourbon barrels, honey, maple syrup, imperial stout? It sounds like a dream, like CBS' little brother. What this is, though, is fairly disappointing. It's thin and tannic, almost metallic at times. Just a huge drop-off in taste after the nose. So why? Well, it could be the honey or it could be the type of bourbon barrel or it could be some very mild infection. Truly, I have no idea. But what I do know is it is mediocre. And I encounter the same tannic flavor/feel in far too many JO's offerings.

i can't remember who brought this to marine1975's house, but thank you! sampled 3.3.12 and reviewed from notes. poured into a Duck-Rabbit snifter.

A - black with deep brown highlights; basically no head or lacing, just a few bubbles

S - some wood, bourbon, a bit of vanilla and toffee, leather

T - citrus, dry bourbon/whiskey, some ripe fruit, some maple and honey come out some toward end

O - it was a bit drier than i expected for a beer made with maple and honey. the whiskey flavor is very bright. good overall.

Giant thanks to smokeypeat for this gracious gift! Poured into a Jackie O's snifter at 55 degrees. Split 3 ways.

S. Bourbon is upfront but not overwhelming I get the sweet honey and maple,but it is very faint. Oak and chocolate with a hint of vanilla. Pretty awesome smelling beer.

T. Bourbon hits first it is not overbearing by any means,then comes the woody notes with some leather. In the back you get the sweeter characters vanilla and honey.

M. Pretty good and heavy at first,but I noticed as this warmed it got a bit thin. Nice coating appeal to it. Low carbonation.

Overall an excellent BA stout. I would love to enjoy this again. Again thanks Chris! And I would seek this one out for sure,if you havn't had it.

S - Honey, burnt sugars, caramel, slight roasted oatmeal notes, some char on the end. Not overly booze, but could probably use some additional time in the bottle do blend together a bit more.

T - Similar to the nose. Honey, burnt sugars, light toasted bread/oatmeal, some chocolate, and not as much char on the palate when compared to the nose. The bourbon is well-integrated for being so fresh. Finish is roasted chocolate sweetness.

O - This one tasted a lot like Cellar Cuvee 5, so I guess the Brandy Barrel Super Fly is what detracted my tastes from that beer, as I enjoyed this one a lot more over it. A little more time in the bottle might do this one good, but it's drinking pretty good right now.

Thanks to Jason for sharing this one. Didn't catch the bottle number, but it's from the December 2011 batch. Served in a Surly Darkness glass.

A - Looks pretty similar to the Cellar Cuvee #5, but with a bit more wispy foam on top.

S - Tons of oak and char flavor here, and a lot less sweetness than the Cellar Cuvee #5. Bourbon, roasted grains, and dark chocolate round things out.

T - Taste is pretty similar - oak, bourbon, dark chocolate, char, ash, and a hint of vanilla. The maple and honey sweetness comes out a tad when it warms up, but this is a pretty burnt and bitter Imperial Stout.

D - After having this, I'm more impressed by Cellar Cuvee #5, as Brad's managed to take two beers I don't really care for and blend them into something pretty good. This one was a bit too charry and ashy for my tastes - I suspect the Europeans would dig it though!

S- The nose is really really nice on this one. Bourbon barrels, vanilla, oak, and dark roasted malt all come through.

T- Sweeter than I would have thought judging by the nose. Nice warming bourbon flavor initially with some vanilla and anise. Roasted malt, smoke, bittersweet chocolate, and alcohol in the finish. A lingering sweetness is present throughout.

O- Another very great brew from Jackie O's. Every stout that I've had from them so far has been truly delicious.

Yet another beer opened at the epic tasting that took place this past weekend. Poured into a snifter.

Appearance: Pours pitch black with a layer of tan head that fades to a ring around the edge of the glass.

Smell: There is some warm alcohol right off the bat with roasty malt and some dark chocolate as well. Mildly sweet.

Taste: Sweet and roasty up front. There is some honey and maple in the taste. The finish is a bit hot from the barrel aging.

Mouthfeel: Medium body with tingly carbonation and a dry finish.

Overall: This one is quite good, but I wish there was a little bit more maple to be found. This will only get better as it ages. I would have another.

Poured from 22oz bottle into The Bruery Tulip.

A: Yeilds a two finger head with aggresive pour, forms a thin off white lacing after it decends, decent carbonation.

O: This one is still fresh from the release and could have used a little more time in the cellar ,It's still a little hot but yet so damn tasty..everything seems to meld together and nothing seems out of place..Very well made beer.

4.0 A: Black color. One and a half fingers of creamy light brown head. Retention is good given the ABV and lots of lacing is left behind.

5.0 S: Wow, this smells wonderful. There's a perfect balance between the stout and the barrel. Strong, yet supple roastiness. Plenty of cacoa and rich milk chocolate. The maple syrup adds complexity and gives this a uniqueness from JO's other big stouts. The honey is tough to find, but is there if you sniff deep enough. Barrel and bourbon give leather, earthy woodiness, vanilla, and hints of melon. Booze is hidden well.

4.0 T: Taste is a lot like the nose, but with a touch more booze. Big roastiness is there, which gives just a touch of burntness on finish. Chocolate joins caramel to add a sweet touch. Again, maple syrup adds a nice complexity and the honey is hard to find. The bourbon adds the leather, melon, and vanilla again, but also gives a touch of astringency on finish.

3.5 D: This started off with so much potential in the nose. While this is still a tasty beer, it isn't a masterpiece. I'd put this a couple hairs below Dark App and several hundred hairs below Oil. Worth a drink. That was my first and only bottle, so adu till next release.

Thanks Brad for this sneak peak.

Pours a reddish brown. Nice tan head. Looks very solid. Smells chocolatey and roasted, almost smoky from the barrel. Cots of barrel on the nose. Tastes boozy, hard hitting on the front. A bit harsh but the base beer shines through. Dark chocolate, nice oakiness on the tongue, the bourbon overpowers the nice rich base beer too much. Good mouthfeel but overall a solid brew.

Tasting at Jackie O's. Thanks for the preview brad!

T-bourbon stands out, not that it is a bad thing. Oatmeal in the beginning. Almost a boozy chocolate candy bar to finish. This is as close to heaven as you can get

Bourbon Barrel Middle Of Nowhere from Jackie O's Pub & Brewery
Beer rating: 91 out of 100 with 75 ratings