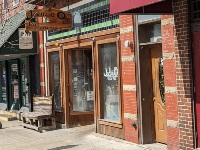 Great midwest college-town type place with friendly staff. Beer selection was good on my visit; but not great. Menu is primarily pizza which was also good; again, not great. FWIW, if Im ever in the area again I’d definitely go back!

Frequently very busy, which speaks to the quality of this Athens institution. Wonderful food and huge selection of their own brews! I always stop by when in town.

As an out-of-towner I stopped by here a few days after I visited the production brewery (where you buy bottles).

We walked in about 11:30am on a Saturday. Fortunately there was no wait, but we got one of the last tables. By the time we left there was a huge line.

I ordered by customary sampler, complete with a double barrel Dark Apparition. Its been nearly a year since I drank that four ounces and I shall never forget. Absolutely amazing. Not often you stumble onto a beer on tap this good randomly.

Having had many JO beers prior, the other 3 beers I ordered were sort of the off-the-wall beers and styles. Nothing else memorable and one I even decided to pass on after a couple ounces. Granted they had plenty of other 4+ beers on I had already had.

I did not purchase any to-go bottles, since I had hit up their production brewery a few nights prior.

Be prepared to wait, but it will likely be worth it!

30 taps, including 1 guest tap, that cover a wide range of beer styles. Moderate size with a long bar and tables both indoors and outside. Friendly, attentive service.

Really nice spot in the heart of Athens. The bar is long the seating area is pretty large as well. The tap list is insane. I would say they had at least 20 beers on tap there. The service was very good. The food was excellent too. I really enjoyed it here and I wouldn't mind going back sometime.

This pub space is more quaint and cozy with a woody, almost Irish feel. There's a small to moderate central U-bar at the end of the room, with small, short tables leading up to it. It's an intimate space with a mellow vibe making it a nice hangout relative to the crazy busy and popular Public House next door.

The taplist might appear short, but if you know what's on draft on the massive list next door they will go get you something from over there. So essentially the taplist here is just as huge as the Public House, and the variety is great. There are plenty of beers here you likely can never get at your local bottle shop, especially if you're from out of state. But they're all Jackie O's drafts.

O my complaint is that the bottle list for take out wasn't up to date, and the server didn't know. Wanted 3 bottles off the list, could only get one when she came back and we both learned they were out...twice. But that being said, extensive taplist of well done offerings, vibe and food are both solid

Does this place even need to be reviewed at this point? The place speaks for itself and the the reputation built by the beers precedes it.

There's been some minor changes to the pub side over the years; there's more taps, bottles to go, and a nice restroom. The brewery side, however is totally unchanged. Some of the old bottles in the rafters have been there for nearly a decade now, awesome.

Obviously you want to go here. One of the best breweries in the state. Don't forget to order everything that's FAF.

One of three spots you can check out in Athens. The pub gets really busy and can be tricky to get in, especially on a gameday. The brewery is pretty close and has some food and a good draft list. It's a little less hectic. The beers are great. They are absolute masters of barrel aged. That being said, I'd make sure you had a ride if you plan of having a few. They get pretty boozy. The brewery is funky and old. I like it a little more than the pub. You really can't miss with all the great stuff on tap.

Amazing bartenders/personnel, beers, and cheese curds. What more is needed?

So, I live in Ohio, and I've been drinking Jackie O's beer for a long time, but I'd never been to either of the Jackie O's locations. A hot new release last fall (2016) finally got me to make the 5 hour round trip drive. Yes, it's a great spot. The food is great. The beer is awesome. And the people are fun. I only wish this place was in my backyard, instead of so far away. That said, the drive to Athens through the countryside is a nice one. If you are asking yourself if you should go out of your way to visit Jackie O's, the answer is absolutely yes!

Jackie O’s had been on my radar for years. Heard some real good things and I’d always wanted to visit; it’s just so geographically undesirably in the middle of when am I going to be in southeast Ohio, right? In 2012, my company sent me out to Waverly, Ohio to look at a landfill for sale and all I could think of was how I was going to head back east via Athens. I had had car problems earlier in the day and took a jump start (stupid alternator), and when I rolled into Athens an hour later and parked; shutting off my car, something told me to try to turn it back on, which it did, but barely. I was in Athens, parked on the hill looking at Jackie O’s with the realization that if I stopped and stayed now, I’d be dealing a dead car when I returned; a good few hours, hundreds of miles, & 4 states from home. I was right there, beer within my grasp, but couldn’t stop in, had to move on. And Jackie O’s became my white whale brewpub…

Earlier this year, Witzelface and I hit Cleveland for beer things, and trudged down south for the day. Parked around the corner and trudged through the light unexpected snow, yo. Some talk about how some part of the place burnt, entered in and pushed to the bar to the rear; ‘U’ shaped copper panel topped, dinged & stained, with a wide wood lip, vertical wood base, & piping foot bar. Seating for a dozen on hightop chairs, a pair of which we too easily procured upon arrival.

Barback to the rear, counter space over coolered cans & bottles below. Tulips, snifts, & martini-like do the dangle above, and growls hooked on display. Dead soldier bottles silled atop; some house, some not, along with a flatscreen, a Jackie O’s stained glass piece, and some other bric-a-brac. Kitchen peek-a-boo with more dead soldiers above. Glass wall barback offers slight brew room views. Arched plank wood ceiling, brick walls, & slat wood floors. 4X4 boards of the non-wet erase variety listing beer, descriptions, & ABV on the side wall. 10 tables out across the room, hightop, barrel, & shorty. Spots over the bar seating and on the boards, spinny fans down center, a projection screen and fuck, it’s snowing; People are laughing at us over our soon to be drive to Pittsburgh; mental neck punches abound.

Food, yes, please. Witz went with the fried curds. They were crispy gooey cheesy good. I gone ‘et the grilled chicken sandwich (L, T, & O), with a side of soup which today is chili, beany she be.

Beers were good, not great, food was good, scene was seen, but the experience was a bit of a letdown for the hype and my level of want to have seen the place, truth be told.

Driving back from The (Shelton) Festival’ in Louisville to Brooklyn a few months later, I gots to be thinking that rolling through Athens on the way might just be the play. Didn’t know what a complete and total shit show Halloween weekend is in Athens but I procured a sweet slander spot nearby and we waded through the sea of costumed kids over to J O’s, which was surprisingly not packed like the streets were.

We grabbed a beer and wandered out the back and upstairs to the rooftop deck (hey, didn’t know that was there). A dozen tables between both sides mix & match, if mem serves. We ordered a pizza, it was the goods. Another beer and back down the other side to the other room (hey, didn’t know that was there). Well, fuck! Big bar and a shit ton of seating.

The Mystic Mama IPA was drinking nice, as was the CSAsion (honey and local stuff). And bottles for the takeaway. Somebody got a little bourbon barrel Oil of Aphrodite out of hand. Not mentioning names, but Alex, it was you. Hot damn! Much better the second time around. I dig!