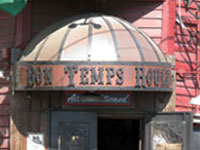 View: Place Reviews
Reviews: 9 | Ratings: 11 | Log in to view all ratings and sort

The place is a dive with mediocre beers, but a dive with on of the greatest contemporary brass around. Worth a visit just for the lively and party atmosphere!

we walked out to this place from the bulldog... a little far out.
The bar was set up like a standard pub, this one looking especially weathered. There are no printed lists of the bar's selection, only a chalkboard that lists the breweries and those beers offered by that brewery in thin, neon writing. I honestly had trouble figuring out what to order... and I have the eyes of a 20 year old... I decided what i wanted from the bottle labels in the cooler, and the beer I picked... they couldn't figure out the price of. I ended up getting a bottle of a 9% DIPA from Utah for $4.50, which was an excellent price. In all honesty the intense heat, pitbull fights, and smoke got old... fast. But the prices were pretty solid!

This bar is worth a stop but their selection is mediocre and I would probably never trust their food... However, the service was prompt and samples were offered (without even asking) for free. wifi is free and available.

From the outside, it looks like a dive bar, which is why my friend and I stepped in. We were looking for a blue collar dive to step into and drink a few. We were pleasantly surprised to find a great selection of micros and imports, with a strong influence of local beers, such as NOLA and Abita. The bartenderess was a very nice gal that made us feel like locals from the time we walked in. A few of the regulars even talked to us, like they've seen us before, even though we were from out of town. Lots of free samples of the beer? YOU BET! Has a couple of big screen tvs and a huge chalkboard with all the brews they have. Def worth the stop if you're in the area.

The door was at an angle to the corner and as I ascended the steps, I realized that I was going to be as at home here as I had been at The Bulldog. In fact, Jeremy was sitting there with a couple of friends (read honey honeys) as I entered. I was greeted by Todd, the bartender with two Ds, having cut down from three. He sported a Prisoner # 6 t-shirt and by virtue of my knowing the allusion, I was christened as the New # 2. Yow!

The unfinished, slatted wood floors began just inside the door, followed by two pool tables, a small snug, a CD jukebox, and a few video poker machines. Before you get the idea that this was some enormous space, let me assure you that it was not. It was tiny, cramped, and popular, all increasing its allure. Back aft, on the left hand side, were the lavatories. Beyond them was the stage area, where another patron, Chris, said that they have live music several days a week. Noteworthy on that side was the mosaic aft of and above the dance floor of gators and crocs. Very cool.

Fifteen beers on tap, all quality, plus another two coolers full of quality bottles. This was another good pick and fully deserving of a visit. For me, it was the end of my Nawlins visit.

Alright so I think it is about time I review this place since I lived right down the street from it for so long. It's a dive but it's cool at the same time. Their beer selection is ok. I walked down and killed some Abita and played Golden Tee all night with a buddy of mine which is great. The food is okay but the music is cool. This is your typical neighborhood bar which can get rough sometimes. A couple thugs have been shot there during the 2 years I lived nearby. That just makes it more fun and interesting though, right? If you have chance to stop by you should though cause it's a nice little place to hang out and have a few beers...and play Golden Tee.

They have a good selection in their cooler for what most people would consider a dive, in NOLA its more of a "Neighborhood Bar". Early or on a night they dont have music the bar is open and easily accessible and quiet. The bartenders are nice and they have a great bottle selection and 8 taps up front with 4 or 5 taps in the back and a smaller but good bottle section in the back with the stage. Last time I was there they just ran out of the Abita IPA Select on tap, which I have been loving, but I usually stick with bottles here. They have enough to keep anyone happy and they seem to be in good rotation and fresh. On a Thursday night (The Soul Rebels play for free every Thursday night till about 2 or 3 am) you have the same beer options, but getting your order to the bartender is a challenge. It is a very mixed crowd, including several 4 legged friends, and everyone is there to have a good time, it is just hot and packed. After a night of drinking, yelling and dancing/jumping around you are going to leave drunk, sweaty, and happy. Personally I love it, but its not for everyone.

They have food, and I know sometimes for happy hour its free, Ive just never had it so I am not going to comment on it.

As far as New Orleans bars go, Le Bon Temps has a great beer selection with a true local feel. The bar is dirty and cheap but the beer is good, the glasses are clean, and everyones there to have a good time.

Le Bon Temp is mostly a locals bar. This place has a great atmosphere. It is divided into two sections...one is just a bar and the second section is a music room. They feature live music most nights of the week. The beer selection is strong for a place it's size with several of the typical imports on tap and the regional Abita sold prominently. They also have good bar food at reasonable prices. This is a place to go if you want to know what New Orleans is really about....a little off the tourist path and open late into the night!

This was my favorite bar in New Orleans. It seems like it's in another world from the stuff you find on Bourbon Street. This is the bar where the locals go. It's got a good selection of beers (isn't weird how dive bars seem to have better beer than their upscale cousins?) It's a bit crowded, though. The pool tables are a tight squeeze between the bar and the booths and since it's a popular place, it gets a little full. The back room is used for their live music, which when I went was a jazz band singing about pot. They also serve food, but when I got there it was too late for the usual kitchen food but they served up barbeque sausages and white bread. That was good. Great place to go when in New Orleans.