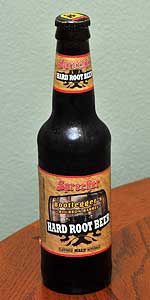 Notes: This is a fermented malt beverage, meaning it is pretty much beer, but it tastes just like root beer. The 5% ABV brew has a tinge on malt flavor on the finish; other than that it tastes just like soda.
View: Beers | Place Reviews
Reviews: 36 | Ratings: 234 | Log in to view all ratings and sort

L: Big foamy head and very dark color but cant give many points because the color is influenced by the caramel color they add in.
S: A lovely more spicy version of sprechers root beer.
T: Root beer, vanilla, spices, honey.
F: Little syrupy but as is to be expected from hard soda, good carbonation, good feel.
O: Beats out not your fathers by a mile, an amazing hard root beer.

Poured from a brown 12 oz. bottle. Has a very dark brown color with a 1/2 inch head. Smell is the classic root beer aroma. Taste is root beer, vanilla, molasses, a bit on the sweet side. Feels medium bodied in the mouth and overall is an enjoyable beer.

Pours a tan 1 finger head, and the color of -surprise!- root beer. The head actually does stay at about 1/2 finger, and doesn't fizzle out like the majority of the candy beers.

This one actually manages to taste somewhat like a beer. It starts off mega sweet, with natural vanilla, lavender, and herbed spices, but there's this fruity element - citrus/marshmallow - something like that, and then it fades into barley malt, leaving a malty, semi-sweet finish.

The feel is carbonated and somewhat chalky, but still drinkable. The finish isn't great, either but it's good enough to keep drinking.

Overall, I don't know how to feel about Alcohol Root Beers, but this one is pretty decent. It actually feels like I'm drinking a beer and not just an alcoholic beverage - most just taste like root beer with shots of vodka dumped in. Not the case here. This one was slow brewed (you can tell), and a lot of soul was put into it. I'd have it again.

Does have a decent root beer taste and finishes malty but with a bitterness which is not welcome for a dessert beer. Mouth feel is smooth, creamy, slightly heavy.

Bottle poured into a glass

Light mouthfeel, to nines on the front of the tongue

Goes down quickly like a soda, alcohol isn't noticed which can be a probably, nice variation of a root beer

Sampled last night on 10/4/15. Wanted something sweeter than a brew. Comes in a 12 ounce bottle. Seen this for several years and actually had a bottle in the beer cooler for a good 6+ months. Bottle chilled down to 36 degrees F in my beer cooler and poured in to a vintage upside-down looking "7up - The Uncola" glass.

Brew pours a deep dark brown that is very close to pitch black even with a good 3-finger foamy/creamy off-white head.Lots of lacing is seen just like a fresh A&W rootbeer. Aroma is what be expected of rootbeer of course with a hint of vanilla. Taste is pretty close to the aroma with something else that I can't figure out. Not bad but goes well with the taste. Different from the other Hard Root Beers (Not Your Fathers, Coney Island) but decent. Goes down easy and fast like the rest. Not as sweet as some of the others out. Medium-bodied with perfect carbonation.

Poured from a 12 OZ bottle into a pint glass at Gettysburg Eddie's in Gettysburg, PA. The beer has a dark brown color with a small white head. The smell is root beer, no kidding. The flavor is sweet root beer and is very good if you like hard root beer. A unique flavor and take on beer.

So these are the things all the hipsters are going crazy over huh. Never had a hard root beer but since I saw a four pack of this for $5 flat I figured it may be worth a shot just to see what all the fuss is about.

Look - Dark black with a finger and a half of bubbly off white head that turns to a quarter finger and eventually into a thick though incomplete cloud formation around the glass. Cannot get a read on carbonation due to the darkness. Only head remnants left at the end is a ring around the glass and no lacing is left. 4.

Smell - Large hints of vanilla and tree bark with an off putting medicinal aspect that almost burns your nose hairs. I can't really put my finger on the other scents I'm picking up but it is unlike anything I have ever had. This may be one to drink from the bottle. 3.

Taste - Well it is somewhat like a root beer in some aspects. Tree bark with a bit of vanilla with a huge chalky flavor that I cannot get over. It is easy to drink, but it isn't very good. 2.5.

Feel - Thick and syrup like with only a touch of carbonation upon the tongue. 3.

Overall - I guess I just don't get it. This thing pretty much tastes like taking a stick of chalk and chewing on it. Root beer flavored chalk maybe. Hipsters are weird man. 2.5.

Smell is of root beer with blatant alcohol jumping in after.

Tastes of creamy root beer with very fast infusion of alcohol. Finishes with the woody root beer taste but with of alcohol still lacing it. Almost like medicine.

Leaves mouth feeling dry and taste of alcohol on the tongue with some medicine taste.

This is my first real review. I have to comment on this, though. I was very excited to pick this up at the local wine & spirits store. I chilled it and poured it in a frosty mug, I looked great and smelled decent-like root beer! I took the first frosty sip and was very disappointed, it just does not work for me. It struggles to be a root beer and an ale or malt beverage, very sweet. I still have 3 of the 4 pack and I am considering a drain pour. The appearance and sweet vanilla-root beer smell are pretty much the only redeeming qualities of this brew.

Served at 40F~ poured into a small mug.

A: Dark color. Moderate head reminiscent of a soda. Looks like root beer.

S: Sweet, slightly boozy, wafts of vanilla. Very pungent when poured, to the point of being slightly unpleasant.

O: The aftertaste is so gag-inducing that I have never been able to get through a whole bottle. I am not exaggerating when i say that I needed to brush my teeth and gargle with mouthwash every time I drank this beer. The aftertaste is such an issue that it overwhelms any other positive notes. I have confirmed over multiple purchases that this was not just an issue of one bad batch. Either it's intended to taste like this or there are sizable quality control issues with this beer.

My husband and I love non-alcoholic root beers. We love the flavor of ti. Our favorite is Capt'n Eli's, probably because of the wintergreen oil. Anyways, we were really looking forward to drinking a root beer that would actually get you drunk and we were very disappointed by Sprecher's Hard Root Beer. It just didn't have the root beer flavor I was looking for. Actually, it was just to medicinal and malty tasting for our liking. It was so bad, I couldn't even drink more thank 1/4 of a bottle.

Pours a dark brown with a off white head that immediately fades. No lace on the glass. Aroma is of root beer soda with a hint of oak. Flavor is straight up root beer followed by a bit of alcohol and wood. The start of the taste is way different than the finish. Thin bodied with soda pop carbonation. Overall, a great tasting alcoholic root beer.

I hate to compare, but I like NOT YOUR FATHER'S ROOT BEER better. This was good, but to me it had a little of a copper or metallic aftertaste. I can't quite nail the taste, but to me it isn't as pleasant as other Hard Root Beers I have tried. This really isn't my thing anyway. I understand it is an ale or in the beer style, but I hardly find this categories as beer? I wasn't overly impressed with this product. We bought it out of state because we never see it in our region. It was ok. I wouldn't go looking for it.

Well, I've had a couple of these now, and this one isn't the best of them, but it is surprisingly not bad - I had low expectations.

It had a little foam for a little while. It keeps at the bubbles for a while. The aroma is an interesting spicy mix, but mostly sweet.

The taste is very sweet and soda pop, but with a natural tasting twang that says, there must be booze too. And there is a bit.

This is an interesting root beer but nowhere near as good as the one that wasn't my dad's.

Wait, people hate this, but love NYFRB? I dont think theyre all that different. If yo're looking for a beer that tastes like RB, this is good stuff. Sweeter than the NYFRB.

Prefer it very cold it helps the mouthfeel a bit. I enjoy the taste but the kick must end up coming from the bourbon barrels possibly.. it's a good all night beer if you like very sweet

Very "meh" and had a weird taste on teh finish. It was ok, but the smoke flavor didn't come through much and just kind of made this one taste a little strange.

Smells an tastes like an old root beer that was left in a hot truck during the summer and then iced down. Wasn't impressed and took a lot to get the taste out of my mouth. My dog wouldn't even drink it

I love Root Beer and I thought I would try it out. I thought, how bad could hard root beer be? I bought a 4 pack and have dumped two down the sink before I was halfway through because it tastes exactly like cough medicine.

I drank regular Sprecher root beer 10 years ago when it was available at Costco down here in Tennessee. Finding this alcoholic version is a treat cuz I've started getting back into drinking root beers.

I had seen this on the shelf numerous times but always passed on it. I then recevied a Not Your Father's Rootbeer as an extra in a trade and really enjoyed it. That experience prompted me to give this one a try and I am glad I did. It's not quite as good as Not Your Father's, but pretty close. Tastes just like Root Beer and the alcohol is very well hidden.