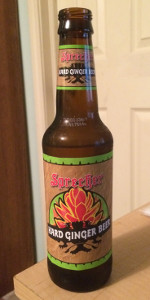 Clear, bubbly, pale golden color with a thin bubbly head. Aroma and taste are on point for what you would expect for a ginger beer. Taste is refreshingly sweet yet spicy on the lighter side of gingery but more compared to a Canada Dry ginger ale. Pairs well with pizza since it is on the sweet side. Check it out for an easy drinker.

Pouring into a Coca-Cola clear glass. Pours pretty thin and very pale. Has a pretty good ginger smell on the nose. Has a sweet taste for a beer. Pretty close to a NA ginger beer, but not much of a bite. Could use more bite and a little more something on the mouth feel. I actually kind of enjoy it for a mixer with bourbon, but not really much when it's just "as is" from the bottle.

Poured from a brown 12 oz. bottle. Has a very pale white/yellow color with a 1/2 inch head. Smell is of ginger, not much else. Taste is ginger, a good bit on the sweet side. Feels light and highly carbonated in the mouth and overall not a bad beer, but not one I would need to drink again.

Sampled last night on 3/21/15. Bottle chilled down to 36 degrees F in my beer cooler and poured in to a handled-glass "CHEERS-BOSTON" stein.

Brew pours a pale yellow in color with a thin white cap with lots of streaming bubbles rising from the bottom and sides of the glass after the pour. No lacing really to speak of. The aroma is what would be excepted which is of course ginger which is very pleasant. Pretty much the same is for the taste with good ginger flavor coming through but isn't over powering at all, just like drinking a good ginger beer with a little kick. Not super sweet either. Very smooth and goes down easy. Very refreshing. Lighter-bodied with good carbonation which works well. Overall, I really liked it.

12 oz. bottle poured into a snifter

A: Clear white wine with a tiny collar. Nice fizzy head on the pour, but goes away fast.
S: Nice light ginger flavor that is very like regular ginger beer. Good floral bouquet.
T: Can barely taste the alcohol here. Delicious like a regular ginger beer. Just like their Hard Root Beer, but less sweet and tastes exactly like it should Very balanced ginger and beer.
M: Smooth with the lightest fuzz of bubbles.
O: Damn good. Plain and simple but that's how it should be for this "hard" version.

12oz bottle. Poured out a clear, light burgundy color with a small, fizzy head of foam. It smelled of ginger and caramel sweetness. Nice ginger ale-like taste with a subtle bite.

This is basically a mild, alcoholic ginger beer. It lacks the bite of typical Caribbean ginger beers; not that I miss this. Like other "ginger beers", this has negligible resemblance to most lagers or ales. Perhaps best suited for fans of wine coolers and the like who also like ginger flavor.

I would not call this beer. On a hot summer day it would be nice cold and refreshing. It is more like ginger ale but with some alcohol. So I added a shot of my favorite bourbon and a dash of bitters and I have my favorite cocktail. Now it works for me. I won't drink it by itself again but it may work better than Vernors when making a Detroiter.

My wife recently started drinking Moscow Mules which include vodka, lime juice, and ginger beer. We've found a few good ones (Fever Tree, Regatta) but a lot of them are lacking the ginger kick that they should have (Gosling's) so I thought I'd try this. It's got alcohol to it, but it's not that much at 4.7%, and she's mixing it with vodka anyway.

The Sprecher is nice, but unfortunately I think I'd have to rank it somewhere in the middle as far as its ginger kick goes. It's got even less than Reed's. But overall it's not bad. For my own tastes I could use a little more carbonation, but I understand that it's supposed to be a little restrained.

If you drink it straight it's got a pleasant balance between soft sweetness and mid-level ginger bite, and because of that I can see why they might suggest that you can enjoy it on its own. I can easily imagine relaxing with one of these ice-cold on a hot summer day, perhaps at a BBQ. For my money though, I'll stick with Fever Tree for making Moscow Mules.

Gave this a shot because it was the first one I spotted.. that was a mistake. Like another reviewer said it is more like pop than beer, it is lacking in both good ginger flavor and beer flavor. The weird, stomach-churning aftertaste of cheaply added malt liquor reminds me of side pocket which made me sicker than I've ever been in my life. I wish I could say this was good, it's just not.

This is a hazy bright yellow-gold beer with a substantial head and great lacing. Smells like lime soda--kind of over sweet, artificial lime. Tastes like soda too--way, way oversweet. There's supposed to be ginger in here as well, but I don't get any. Just pungent lemon-lime sweetness. The press release says it can be enjoyed on its own or used as a cocktail mixer. Don't believe it. The former use, on its own, is borderline disgusting.