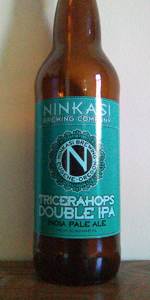 A: Dark orange medium haze, with a rapid rate of effervesce. Thick and frothy light beige head is one inch and steady on the hold. Thick sheet coating of lace has a good coverage rate.

M: Mouthful leans towards the lighter side of medium, warming hop juice of citrusy-pine with some toasted malt on the inner cheeks provides a nice feel.

O: Overall nice balance of malt and hops, reminds me of a dfh 90 how it drinks and in terms of balance, warming hop juiciness, floral hops, and abv. Warming citrusy-pine juice is soothing making for an enjoyable drink.

"Tricerahops is double of everything you already love in an IPA. More hops, more malt body and a higher gravity define this Double India Pale Ale. Fiercely flavorful, guaranteed to satisfy."

Polished kumquat with a handful of swirling yeast that settle into suspension shortly after the pour. Unfiltered (hoppy) beer looks better, smells better and tastes better. The bone white cap tops out at two fingers and more than does its part to add to the attractive appearance. Hopefully, lotsa lace means lotsa hop resins.

Once the foam melts a little, the nose is able to be appreciated. It's pretty good, but it isn't roaring out of the glass. The citric cheesiness brings Cascade to mind. One other variety might be present; it's hard to say for sure.

This Ninkasi offering isn't a rampaging, slavering, ripsnorting, carnivorous beast of a DIPA, but then triceratops were placid plant eaters, weren't they? Yeah, I'm well aware that the beer's name is TriceraHOPS, but with a name like that it should be hoppier. If the brewery is claiming that this DIPA is twice as hoppy as Total Domination IPA, I don't believe it for a second.

The biggest reason it's still above average is that it's closer to a big IPA (as all versions of the style should be) than a barleywine in disguise. In other words, there isn't so much malt that it gunks up the taste buds with sugars. It provides a modest amount of sugar cookie sweetness, then gets the hell out of the way. Trouble is, hops don't exactly rush into the breach.

Candied lemon and grapefruit peel are present, as is a modicum of funky cheesiness that adds another level of flavor interest. The IBUs might be higher here, but this beer doesn't seem as hoppy as Total Domination... which wasn't a hop bomb anyway. Fresh and right out of the keg it just might be killer. Too bad I'll probably never know for sure.

While the mouthfeel is a fraction lighter than the style average, it doesn't deserve to be dinged for it. It has just enough smooth stickiness to be enjoyable, while still allowing one to sip or drink quickly with equal ease. The ABV tastes and feels like a misprint. I'd have guessed at least two percentage points lower.

Tricerahops is a great name for a DIPA. Too bad the beer isn't as spectacular as the name. I'm sure there are those who think the world of it, but from my perspective, if the brewery wants to keep this offering from becoming extinct, they need to use a bigger shovel when adding hops to the kettle.

Big, bold in your face double IPA. Superb hop aroma ranging from piney/resiny to citrusy and tropical fruit. The hops are supported by a big, complex malt body that balances out the 100 IBUs extremely well.

A very nice Double IPA,pours a dark amber with a thin off white head that lasts and one of the best lacing i have seen on a IPA.Wonderful pine and a woody taste. Perfect balance malt to hops.

Golden color, decent head , medium thin sticky lace.
Fruity and marmalade nose. Further along I detect more biscuity, bread and malt aroma. Some pear also.
Light feel in the mouth for a DIPA, medium bodied overall. Soft carbonation. Initial taste is grapefruit like. Very hop heavy as they take over. There is, however, a strong malt backbone. Dry resin hops and bitter grapefruit finish. Very drinkable. I liked it a lot.

T: sweet caramel malts and fresh, chewy grains underscoring a massive hop profile that is both pithy and resinous at the same time - dank, but with bright citric pith-points

M: medium-weight and soft on the tongue, bittering subtly throughout; smooth, great aftertaste

O: worthy of its ratings and rank - delicious and potent, full of bitterness, fresh grain malts and moderate sugars - top-notch DIPA that drinks like s DIPA but without being too heavy or strong. Get some.

I'm not making ANY pretenses, I'm not a beer snob. I don't have a sophisticated palate that can detect the subtle hues and nuances. I don't have a lot of fancy, appropriate words to describe the drink. I like what I like and that's it. The color on this is nice, the smell is OK. But this stuff is just too damn bitter for may liking.


A:
Pours a crystal clear copper
with a cap of beige puff that stays fairly solid throughout. Good retention; lots of lacing. (4.25)

T:
Thick bitterness with red and yellow flashes of lighter, fruit accents with a long, lingering hop shellac finish with some minerals. (4.25)

O:
Really nice IIPA.
It pours a beautiful, radiant color with an awesome head. The aroma is all floral/citric hops with herbal spice and thick malt. The flavor is similar, with a wave of citrus rind that progressively darkens and mixes with the malt for a sticky, bitter ending.
Really nice, big, bad beer. I'd have it again in a second. (4.25)

Poured all cellar temperature-like into my tulip. About time, really.

The first thing you need to know is that this is a very pretty IPA. I mean seriously pretty. Radiant orange, rocky, long-lasting, just off-white head, and glamorous lacing. A real looker.

It smells of fragrant pine, hops of the dank, herbal variety I swear I get a little basil and oregano, but I WAS making pizza sauce a half-hour ago), and orange. Bit of honey. A zesty aroma. Yes, that's the word.

Oh, okay. so that's how it is. The flavor just somewhat exploded on my palate. I wasn't quite prepared for that. This tastes like the result of squeezing fresh oranges, lemons, and grapefruit, and then mixing that citrus juice with pure pine needle extract. It's the bread and butter of IPAs: citrus and pine, but turned up to an extravagant level. Not to mention the lovely bready finish with a lingering balance of astringency and malts.

Love the feel. It's got substance, and substantial carbonation, but at the same time a certain softness.

An wonderful example of an ale that proves you don't need a bunch of ridiculously nuanced complexities to be great (don't get me wrong - I like complexity, too). But this is just unabashed, unashamed, IPA deliverance. And it wooks pwerty. :B

Big hop front, but smooth drinker. To quote the bottle share buddies "that was a double?" - Good citrus smell, but the flavor is more muted. Overall a great double.

So . . . I like it. You can tell by the rating. I don't like the price, but I really, really like Tricerahops. Is it a beer? Yes, under Germanic laws it should qualify. Yet, it takes beer - that stuff we started quaffing in our teens with the boys while buying up the wine coolers for any ladies we could scrounge up - to a different level. Total Domination is an excellent, balanced IPA which in some respects drinks so smoothly that it's like a pale ale. Tricerahops is the Double IPA that explodes with flavor but is so refined that it's smoother than any IPA you might care to mention. This is beer that's better than wine. It's not industrial swill. It's not your average IPA with some grapefruit and so-so malt that's too bland or too thin. The taste and intensity is completely different but in the overwhelmingly appealing qualities of this double IPA, the balance, and the balanced greatness of the malt, it's like a 21st century SABL.

Tricerahops is a radiant orange in the evening light of my house. It has some cloudiness to it, although not as much as some ales. The head is a gorgeous off-white that builds, lasts, and laces.

The best descriptor for Tricerahops is that it's Total Domination amplified, but that's terrible for anyone who hasn't enjoyed Total Domination. It's a blend of citrus of several types, all delicious, and just enough dark resinous pine to let you know that this Dino means business. Not a false note. The aroma stays great to the bottom of the glass, not getting a little weak like Total Domination.

The taste is everything you would hope for. Yes, there's the grapefruit, and the other citrus and tropical fruits, and they are bitter just like such fruits are - but never too much. All that goodness is in there with a malt that's just excellent. It's what we never imagined beer could be in the 1980s. The IBU is 100 but you would never know it. The bitterness is in proportion to the flavor.

The feel is smooth. This double IPA is full and deep. The flavors have a lot to offer and the malt is there to hold them up and hold it all together.

I can't speak for her, but imagine that Ninkasi favors this beverage. Fermentation perfected?

A: Pours a huge orange and copper golden hue. There are hazy tangerine and amber undertones. Overall this one just glows in the glass. Amazing retention and a full halo of draped frosty lacing that coats from top to bottom all the way through. So much lacing that if I look closely I begin to decipher an ancient Mayan code.

T: While hoppy, as expected, this is mildly refreshing. Like crisp pine soaked pineapple. Subtle honey limed and floral taste with a well balanced tart tinge. No malts present here. Very smooth and absolutely perfect finish without the slightest nod that this is a double.

D: Easily drinkable and delicious. Besides that the name is just flat out cool. I plan to put this one in regular rotation. Note to self, try as many other offerings I can from this brewery.