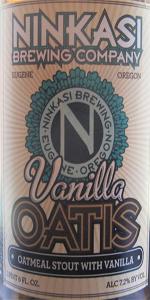 Notes: A delicious oatmeal stout with just enough hops to balance the copious quantities of dark roasted malts, oatmeal for a creamy smooth drinkability, and whole vanilla beans for a rich complexity. To achieve this higher level of decadence, we added in whole vanilla beans to the final stage of fermentation - the same process we use to dry hop a beer.
View: Beers | Place Reviews
Reviews: 133 | Ratings: 680 | Log in to view all ratings and sort
Reviews by ThaneMcC:

Pours a deep, dark brown with fb of light tan head. Smells strongly of roasted malts, hint of vanilla, cocoa, coffee. Tastes sweet, roasted malts forward, strong vanilla presence, transitions to subtle coffee and cocoa notes and abrupt stop - very clean finish. Mouthfeel is medium bodied, minimal carbonation.
Overall, solid oatmeal stout - very smooth and tempered with a hint of vanilla. If they would consider including some hot chilies with this - it would be a truly interesting beer, with the oat tempering the flavors. . .
I rather enjoyed, good price point - and I would purchase again -

Pours an opaque black with a foamy dark khaki head that settles to a partial film on top of the beer. Thin rings of lace line the glass on the drink down. Smell is of dark roasted malt, cocoa, cookie dough, and vanilla aromas. Taste is much the same with cocoa, vanilla, and lots of char flavors on the finish. There is a medium amount of roasty bitterness on the palate with each sip. This beer has a lower level of carbonation with a slightly crisp mouthfeel. Overall, this is an above average beer with a fairly acrid char flavor that lingers long after each sip and takes away from the drinkability in my opinion.

Appearance – The beer pours a nearly pitch black color with just a hint of light shining through the glass and with a small tan colored head floating atop the surface. The head has a good level of retention, slowly fading over time to leave a decent level of lace on the sides of the glass.

Smell – The aroma of the beer is huge of a sweet vanilla smell mixed with some nice big milk chocolate aromas. Along with these are some light caramel smells and some undertones of a roasted malt smell, as well as some more oatmeal like aromas. The slightest hint of a coffee smell is there as well, giving the beer an overall very chocolate vanilla oatmeal cookie like smell.

Taste – The vanilla is huge right from the start and is mixed with a nice milk chocolate and a smooth oatmeal flavor. Along with these flavors are a lighter roast taste with the roast flavors getting slightly more potent as the flavor advances forward. Along with the increase in the roast so too comes some lightly bitter coffee flavors as well as some light caramel and dark chocolate tastes. The smooth oat flavor at the start begins to fade some from the taste, with the bitter coffee and some light earthy and herbal hoppy tastes bringing a little bit of “roughness” to the taste. While it brings a roughness, the more bitter flavors balance out some of the massive vanilla that is present in the taste nicely and overall creates a rather nicely roasted and moderately sweet and bitter dark flavor to linger on the tongue.

Overall – A rather tasty brew. If only it had a bit more smooth oatmeal flavor at the end of the taste and a slightly modified body, then it would be one fantastic vanilla oatmeal stout. Even so it, is rather nice and one to try if you get the opportunity.

Delicious and oaty. A very nice prominent sugary oatmeal on the nose and a strong roasted oat on the tongue. A beautiful dark bronze that retains a layer of froth on top throughout.

Taste- Tastes like it smells. Strong coffee/chocolate taste up front followed by surprising but pleasant bitterness and then a warm malty finish. Vanilla taste is more mild than expected, but does add slight sweetness. Very balanced.

Overall- Tasty, warm, smooth and balanced. Not a bad oatmeal stout at all. Nothing too special but definitely more rewarding and consistent than many other stouts found at the grocery store. A good, solid beer that doesn't get old.

12 oz bottle. Nice color. Tastes even better at room temp. Vanilla is not overpowering. Good value for a six pack. One of my favorite beers from Ninkasi.

Served chilled into a nonical pint glass. Expectations are above average given the brewery and style. Allowed to warm over the course of consumption.

HEAD: 3 fingers wide. Khaki colour. Gorgeously creamy, thick, and full. Soft-looking and supple. Retention is good - about 6-7 minutes. Leaves no lacing on the sides of the glass as the head recedes.

Overall, it's an appealing oatmeal stout, but isn't unique or special. Looks more or less as it should.

AROMA: Oats, dark malts, cream, chocolate malts, vanilla, sweet milk chocolate, and lactose sugar. I like that the vanilla isn't overt, and the oat character seems lovely, but it could definitely be more evocative and intricate. Luckily, there's no off-character, overt alcohol, dirty yeast character, etc., and the hop profile (in spite of the ostensible 50 IBUs) is unnoticeable.

Aromatic intensity is mild at most.

TASTE: The vanilla isn't as overt and naked as I expected, and initially I find myself let down, but as I drink I come to appreciate it as a subtle addition to an already successful oatmeal stout. And fairly subtle notes of creme brulee emerge as it comes to temperature. Predictably, the malt backbone is dark malts and chocolate malts. Many oatmeal stouts don't actually have an oat flavour, but this one definitely does, bringing plenty of starchiness to the table. Light on cream. Mildly sweet. I do find some hints of lactose sugar and milk chocolate which are more appropriate for a milk stout than an oatmeal stout.

I certainly like it, but it leaves a lot to be desired - especially in terms of complexity/intricacy, subtlety, and nuance. It's a fairly well balanced brew which will definitely scratch your oatmeal stout itch, but there are absolutely more widely available brews out there that do the style better - and the sweetness/bitterness aspect of the balance is just off. Average duration, depth, and intensity of flavour, with a nice flavour amplitude.

It's not a hoppy brew by any means. No yeast character comes through, nor do any off-notes.

My biggest criticism is it's just too reticent and closed off. Its flavours just aren't that rich or evocative.

TEXTURE: Medium to full-bodied. It features a strange coarseness and dryness - particularly towards the end of the second act - which drags on the palate and frankly defeats the point of an oatmeal stout to begin with; oats are used to render an otherwise coarse and dry stout smooth and wet - like a porter. Not as creamy or soft as would be ideal, but sufficiently both. It's aptly thick and has a good overall presence on the palate. Well-carbonated.

This mouthfeel, while not ideal for the style, does complement the taste nicely, and the unexpected coarseness helps curb the usual slickness of the vanilla. It doesn't elevate the beer and there's definitely work to be done, but it's well-executed.

OVERALL: It hides its ABV well, and it's a nice oatmeal stout, but it does flirt too much with milk stout characteristics for my tastes, while not committing enough to the titular vanilla. It's a nice but unfortunately generic beer in the style from Ninkasi. I won't be buying it again unless it's the only good choice at a subpar bar, but I'm glad I tried it. Might make a nice introduction to the oatmeal stout style, but the discerning drinker will be unimpressed. On the high end of average.

A: black body with a mocha head a few fingers high; some lace motes left behind

S: vanilla clearly expresses itself above the dark roasted oat and cocoa aromas

T: vanilla is again at the front, riding atop bittersweet chocolate and hearty oat flavors; some espresso notes drift by in the background

O: more smoothed out flavors courtesy of vanilla than their regular Oatis - I found it to be an improvement on that stout; vanilla influence will not disappoint.

Vanilla had me concerned that it would be a bit too sweet, but fortunately they knew how to keep it malty and light. Not sweet at all. Nice balance of oats and malt, with some bitterness cloaked in the dark at the back of the tongue. Vanilla mostly on the nose and at the finish. Nothing to write home about. They were practically giving away bombers of this stuff at the local beer store, so I don't regret the purchase, but wouldn't buy it again if it were at full price. Can see myself housing discounted bombers of this, but that's about it. CHEERS!