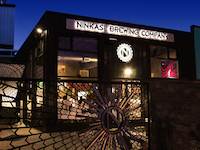 Notes: The Ninkasi tasting room, located in the brewery building, opened in November 2009.

First off, I want to make it clear the ranking is for the tap room as a place to visit, not for Ninkasi beer, which is almost uniformly excellent. But I'm posting this as a bit of a warning for people who might be travelling through and considering making a stop.

Ninkasi's tap room is a block or two away from their production facility in a neighborhood that realtors would politely refer to as "in transition." (In other words, right now it sucks, though I suppose it has potential to get better.) There are lots of people just kind of milling around who look like they're homeless, addicted to meth, crazy, or all of the above. When we pulled up, there was a pile of trash someone had just dumped on the corner, and two people going through it, picking things out. There was a guy walking in the street, leaning over to look inside parked cars, obviously checking to see if there was anything worth taking. It didn't seem like a safe place to leave your car parked (the tap room has no parking lot, so you're parking in the street a block of two away), especially when we had a lot of valuable stuff with us on our vacation.

The tap room itself is nice enough, and there's a very nice outdoor seating area. The tap list, on this day anyway, didn't have anything unusual or exclusive. I understand they serve some food but none of the 15-20 people there seemed to be eating. But we didn't hang around.

Ninkasi makes great beer, but there's not much reason to come to their tap room to drink it, as there are probably dozens of better locations to enjoy it in Eugene alone. If you're travelling down I-5 and considering a stop, I'd say just keep rolling.

Eugene area. Awesome beer and people.. Its the Whitaker area!

One of my favorite breweries in Eugene, Oregon. The location isn't in the best part of the city, but that area has improved along way. Ninkasi is a pinnacle in the Eugene area and Western Oregon beer lovers community. It's a really cool looking modern atmosphere with open stone fire pits fueled by gas. Tasting room is small with a dozen or so seats, which is ok because there is ample seating outside. No food served by them, but a food cart is right next it and one is also across the street. Good food. The tap selection is always changing with seasonal beers which keeps interest in return visits to taste them on draft. They also keep their staple beers always on tap (Total Domination etc.). Cleanliness is well maintained, the staff is extremely knowledgeable and helpful to those who are new to tasting craft beers and those who want something different. They'll let you sample anything before buying. Great company! Locally Owned! Good people! A must for any Eugene visit or brew tour.

Came here in mid September with a friend who was a Eugene Restauranteur. Enjoyed the beer tremendously. Liked the outdoor seating but the fire could've been warmer.

A must-visit when visiting Eugene. Unless you're a local... then you can go any time you please.

Very busy tasting room on a Friday afternoon. Still, great service. Tasty flight, and I really liked the tasting cards for each beer. Eclectic vibe with college kids and older folks, all enjoying beer in the sunshine.

Stopped by for a quick sampling, the beer was good, but the place seems to be lacking character, I mean they are trying to build character but it seemed forced to me.

Got the grand tour from a BA buddy, this place is huge! They have like, 5 blocks of buildings, and growing.

The tasting room is real nice, plenty of merch, nice selection for you to choose your beers from.

Great outdoors area for kicking back and enjoying some Tricerahops on the weekend.

Ninkasi Brewing Company in Eugene, OR
Brewery rating: 3.76 out of 5 with 7625 ratings