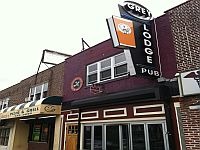 Notes: The Grey Lodge Public House announced that it has permanently closed on November 19, 2020.
PLACE STATS

View: Place Reviews
Reviews: 83 | Ratings: 106 | Log in to view all ratings and sort
Reviews by nlmartin:

After a major cab ride here I was ready for a few beers. The place was dimmly lit and slightly smokey downstairs. The service was slow to begin with. So I wasnt exactly in beer Nirvana. I found out later they where in the process of changing three kegs out.

Ten minutes after entering the place I was enjoying Russian Rivers Damnation on tap. My wife was enjoying a pint of Flying Fish IPA. We drank a couple more draft pints and went upstairs for some eats.

The upstairs bar is no smoking. The menu is notable for things that pair well with beer. We ordered fish and chips. Wonder of wonders the upstairs bar has different taps. I ordered the Troeggs Naked Elf. The bartender said he wasnt sure if enough was left in the keg for a pint. He poured the beer and my luck held out. Dam that Naked Elf is nice. We drank a few more pints and downstairs we went.

We drank numerous pints of beers this evening. The service was pretty good the rest of the night. The bartenders served the beers correctly. All of the beers served at a proper temperature. The staff was knowledgable about the beers being served. They changed out beer kegs on several occasions during the evening. The boards remained accurate throughout the night. The frequently changing taps annoyed my wife. She said it was hard to plan out what to have next. I pointed out the beer is going to be pretty dam fresh. They had a very nice assortment of beers in the cooler. This is a top notch beer establishment and I will stop by again.

Have gone here off and on for the past ten years or so. A true gem in an area that needs it. Located near the original Chickie's and Pete's, it's a relaxed atmosphere with great beer, tasty food, and a solid staff. Scoats knows his stuff, and I am a big fan of the cajun wings!

Awesome beers and awesome grub. Must go if in the area

Overall the cleanliness leaves a lot to be desired. Bathrooms are pretty gross.