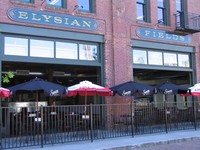 Visited with Fitz before a Seattle/Houston baseball game. Place was relatively crowded and thinned as folks headed to the ballpark. Sat at the bar.

V - A big open concrete space with some areas loosely divided to allow parties, etc. A place they probably hose down at the end of the night when necessary. 3.5

Ser - Slow and our first bartender had little knowledge of the beer. Others had more. And of course I ordered a beer off the menu that they no longer had available. 3.75

Sel - Fine but lacking a little in variety. I don't care how warm it is you need to have some heavier beers on tap. 3.75

There is no shortage of watering holes around Safeco Field and Centurylink Field, so Elysian Fields fits naturally within the neighborhood. It's huge, like a large beer hall, and there's a large oval bar where much of the action takes place. I had make it around 11pm, not too long before closing, so while I wouldn't have an opportunity at tasty food, I could see if I could drink a few Elysin beer's that I can't get in Southern California. Also, most of the chairs were stacked on the tables, so naturally the bar was calling my name. It wasn't as exciting I thought it would be for postgame, though I still enjoyed my time.

16 different house beers pouring from the taps, plus an additional 15 bottle selections. Several house IPA's flowing, mailbock, red ale, lemon saison, barrel aged barleywine, and porter along the Elysian selection, while Duchess de Bourgogne, Duvel, and Aventinus could be bought from the bottle. As I learned from Henry's Tavern pre-Mariner's game, plastic cups appear to be the vessel of choice on game day, making service a little quicker, but hurting the aesthetics.

The place was packed for the first Mariners game of the season, but there was a good feel in the place and it's a very large with a number of seating areas and places to stand, so it wasn't uncomfortable. My wife and I found a table in the back room where you were allowed to have drinks without eating. They don't do samplers on game nights, unfortunately. The beers were good and overall we enjoyed ourselves. However, they were out of many beers that were listed as being available, were not available and so I could not get a couple of the beers that I would have really wanted to try. Other than that, worth the stop if you're in the area.

I went to Elysian Fields again the other day to see what interesting beers they have available and to relax after work. It was my first trip to the location not either immediately before or after a sporting event; as this place is just a few hundred feet from Seahawks Stadium, you can imagine how busy it gets on those days.

Overall the location is pretty sizeable, with a big oval central bar that has copious seating. There were around 20 taps, including both Elysian staples as well as rotating and seasonal beers; I really appreciate the variety. Service was a bit slow, considering the relatively low volume of people in the place, but the staff were friendly and helpful -- and I wasn't in any hurry.

This place is definitely worth a stop. They make some interesting beers at Elysian, and this location seems to have their biggest selection.

Right next to CenturyLink and Safeco Fields. Good food and beer. Modern compared to the Capitol Hill location.