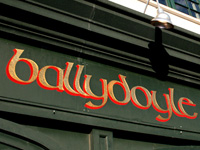 Rated by hopheaddeluxe from Illinois

Reviewed by krl2112 from Illinois

Reviewed by cagocubs from Illinois

3.4/5  rDev -7.6%
vibe: 4 | quality: 3 | service: 4 | selection: 3
Stoped in here just to see what it was like. When I went there were very few people so I cant really judge the atmosphere. However I did like the Irish feel of the bar and the stage set up to house a band. The service was good being that only a few people were there. The selection was decent at best. I had a Beamish and was happy with it. The value was reasonable as it wasnt pricey but it wasnt a bargain bar either. Didnt try the food. All being said, this bar falls short of an Irish bar expectation, but does have potential.
Jan 14, 2009

Reviewed by MrMcGibblets from Illinois

2.83/5  rDev -23.1%
vibe: 4 | quality: 2.5 | service: 3.5 | selection: 2
this is definitely not a beer destination, first off. not sure why this place is on here other than the fact that it stays open later than emmett's ale house across the street. i'd only come here if i still wanted to hang out and drink after emmett's or to see a band, whatever. atmosphere is your typical american/irish pub. there was an irish band finishing up when i went. i was thoroughly unimpressed with the beer selection-a decent amount of choices but mostly beers not worth trying, imo. macro imports and bmc products for the most part.
Jun 23, 2007

The U2 tribute band Elevation was playing and the place was packed. There is a nice bar to your left as you enter. This is also the area of the pub that contains the stage. Cool big windows look out over the main drag. They have a classic old style back bar.

There are three other rooms for drinking and dining. If weather permits, they also have a side patio area. Nice large & clean bathrooms. This place looks like its been open for 75 years, but I was told the building was built three years ago. The builder did a nice job of aging the paneling, adding period lighting etc. The only thing that is out of place is the suspended acoustic tile ceiling. They should have spent a little more for some pressed tin. Still an attractive place for a pint.

Speaking of Pints, they have a decent but not stunning beer selection. The best of the bunch include Goose Island, Bells Oberon, Smithwicks, Pilsner Urquel, Sierra Nevada, Warstiner and King Ludwig Weiss. I also liked that they had point and Berghoff Red. The rest of the choices include Bass, Harp, Guinness, Killian, Blue Moon, Calsberg, Lite, and some ciders. Lots of BMC choices in bottles.

The service was friendly and given the crowd, efficient. Never had to wait for a pint. It was hard to get a reading on the crowd, as many folks were there just to see the band (who were very good).

I would have not have any problem heading back for a beer or two. Makes a nice one-two punch combination with Emmetts.

Reviewed by MillRat from Illinois

4.2/5  rDev +14.1%
vibe: 4.5 | quality: 4.5 | service: 4 | selection: 4 | food: 4
Ballydoyle drips with Irishness, as the owners intended. There are at least 16 draught (their spelling) beers on tap at any time, including the requisite Guinness and Harp, plus Boddington's, Belhaven, Hoegaarten and several others. Their current beer special is Warsteiner lager and octoberfest, go figure, probably something their distributor is offering. Beers are served in brewery-logoed correct glassware, cool but not icy. Good presentation overall. No off flavors indicative of less-than-stellar kegerator maintenance, either.

They have separate bar, smoking and non-smoking restaurant sections, plus a concert area with a stage on a hydraulic lift. Why? So when they have Irish dancing, everyone can appreciate the footwork. As I said, serious about the Irishness. Friday and Saturday nights feature live bands, ranging from traditional Irish to punk Irish to Led Zep tribute bands. Sundays 5-7 a changing retinue of Irish-instrument musicians show up for a jam session. Recommended. The rest of the week has various features; check their web site for the monthly line-up of entertainment.

Food is traditional Irish made with care and flair, There are also a few typical Amercian-fare entrees for the less adventurous and those with dietary concerns. There's a few vegetarian options, too. The portions are generous. The seafood boxty and the Guinnes and beef stew were excellent. The grilled salmon was nicely prepared, but not much different from what one would expect in an American cuisine restaurant. The deep-fried corned beef balls were tasty, and the St. James Towers cheesecake was sinfully delicious.

The interior is laden with antiques of various origins including most of the furniture. While not necessarily authentically Irish in origin, these mixed and comfortably worn pieces lend a well-established ambiance to the place. The finishes on the wood furniture, paneling, and dividers that dominate the rooms are mostly dark or the order of mahogany and walnut, lending a cozy, clubby sort of feel to the place, but the haphazard mix of pieces and finishes, along with the obvious wear and tear, keep it from getting at all uptight or stuffy.

About the only concern was parking, which is typical in this downtown section of Downers Grove. It is walking distance from the Burlington Northern train station, so travel by train (Metra) is an attractive option.

Both the beer connoisseur and those who appreciate other finer aspects of life will enjoy the Ballydoyle. The quality of the food, atmosphere, and entertainment options let the non-BAs you might associate with have a great time, too, without ever feeling that they're humoring their beer-questing spouse of friend.