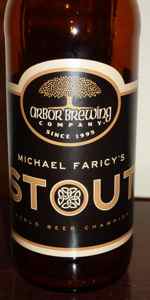 Not too shabby, let this one warm up to cellar temperature … it is a must. A little rustic and not as dry as expected. A decent quaff.

This is a nice stout. There is a good roasted/smoked tone that is just a hair about subtle that stays consistent throughout. Hearty body. Might be a bit too heavy for this style, honestly. It's still a good beer, though I'm not sure if it really fits to style. (Too heavy in body. Too much carbonation.)

Bottle poured into a nonic pint.

A- A normal pour produced a 1-finger, brown head that sustains as a moderate film that leaves a lot of nice spots on the glass. The body was near jet with dark brown edges.

S- Medium dark chocolate. A touch of that "stale" quality associated with Guinness (for good or bad depending on the reviewer), though I may be mistaking it for more of a roasty scent. Some coffee tones. A little muted at first. As always, more pronounced with some warmth.

M- Medium-thick viscosity. Light carbonation that I enjoy for the style. A touch chalky perhaps.

O- A solid beer in my book. Not going to seek it out, per se. It is something I'd put in my "stout rotation." A good gloomy day drinker as there was a light drizzle outside while I had this one. I could do a few of these in a sitting. I picture it as a good accompanyment to a stew or maybe the baked potato soup that was going in the crockpot.

A - Typical stout pour - nearly jet black, with a tight two-finger tan head that has nice retention and drops slowly.

T - A smack in the face. Nothing but sour/burned coffee. First stage infection maybe?

M - A little light for a stout, but at least the carbonation is right.

It was so promising, and then the first sip - ugh. Drink it up and move on to something better.

12 oz. Fairly black, some brown around the edges. Some floaties?? Wouldn't expect this to have much yeast sediment. Half finger of off white head.

Aroma is pretty chocolatey. Some roast malt.
and coffee, not bad. A little subdued maybe.

Fairly thin, but not overly so to me. High side of the light in the spectrum. Carb is a good level. No alcohol, I see no problem with this single bottle, a good session stout.

On tap at ABC in Ann Arbor:

S: Mostly smoke, roasted grain, some coffee, most else gets drowned out

T: The flavors pop a bit more on the palate. The smoke and heavily-roasted espresso come across the biggest, but there's also a nice touch of cinnamon and perhaps clove to the mix. Chocolate there provides a hint of sweetness. No real hops to be spoken of.

M: Medium bodied stout, thicker than your typical Irish dry, but thinner than a rich American.

D: The smoke was a little heavy, but I was plenty able to finish my pint. While being heavy, at least the smoke didn't totally overwhelm and kill my palate, so had I been so interested, I could have had another beer right after without much concern on that end. I would have appreciated some more balance, but the spice notes came out well, and I appreciate that.
Overall, I'd have it again, but I won't miss it once it's gone.

This beer is very close to black, just some brown in where the light edges into the body. The head, medium brown in color, is a thick and solid finger tall. Lacing is left in a good amount of patching.
Roast comes out strong in the nose with raw dark cocoa, a bit powdery, with a bit of coffee in the roast, some yeasty character and a bit of charcoal.
Roast is equally heavy in the flavor and leads into the charcoal, completely dry with little to no sweetness but avoiding astringency or heavy chalkiness. Some herb speaks to moderate hopping, and it finishes out with some toast that comes in at the middle.
The body's good, and it's not too heavy considering it's not the Americanized idea of the style but sticks to the original blueprint, as it were. It is quite dry, though the leaf and chalk build up in the back of the throat with time. That lingers to some effect.

Looks great with a head that allows you to pour the entire bottle at once, into a pint glass. The smell is cocoa, with the aftertaste from the last sip dominating. The taste is nice. I normally prefer sweet or American stouts, but this is a good change of pace. The balance is good, but it does have more bitterness than the stouts I prefer. If you're going to drink an Irish Dry Stout, this is a great one!

Nice nose of roasted barley. Taste is bold, black malt with plenty of scorched sugar, but not at all sweet. Light body and a watery, refreshing mouthfeel. No hint of sweetness. Very grainy and more than a hint of charcoal. Tastes like a "light" black Irish Stout to me. Less head than you might want. Very long bitterness to finish. Quite hoppy.

M - Mild bitterness left on the tongue; thin body, didn't feel as creamy as it look; kind of bubbly, but could be thicker; thinner body than advertised; chalky dry feel

D - Overall, good drink; easy to go down and washes flavors away with a dry espresso taste, I recommend to others and makes a nice dessert beer