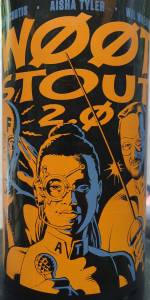 Enjoyed out of a 22 oz brown bomber with that distinctive comic book label art and a bottling date of 6/28/14 marked on the neck in smeared yellow ink. Poured into an oversized 30 oz snifter.

Appearance - Pours an inky dark walnut brown hue that prevents any kind of light from passing through. The body is crowned by a finger of dense cocoa powder colored head with a smattering of larger bubbles that burst to leave isolated pocking across the surface. Retention is low-to-moderate, and dissipates to a healthy film across the surface with a thicker ring of foam build-up along the sides of the glass after a couple minutes. A few minutes more and the film has become a swirling across the surface of a inky black lake.

Smell - Rich aromas of chocolate and dark malt dominate the nose, with hints of baking chocolate and even some notes of fudge. The pecans are also present, lending a nutty sweetness to the aromatic profile. However, I'm disappointed to note that the addition of the chocolate seems to have pushed aside some of that amazingly rustic rye characteristic that I remember from my bottle of version 1.0. I can't help but wonder if some additional time will allow the chocolate to blend together more seamlessly as the chocolate fades back and the grain comes to the forefront. The bourbon barrel is pretty far in the background and only comes through as a subtle oaky characteristic with some subtle vanilla undertones. Honestly, if I didn't know this was partially barrel-aged, I probably wouldn't have been able to pick that smell out.

Taste - I don't notice the absence (or really, overpowering) of the rye as much in the taste as I did the aroma, mostly because the chocolate really comes through and complements the pecan sweetness so well--it's like a chocolate-pecan pie. The bourbon is a little more present here, but is still far in the background. However, I can't really complain--I don't get any of that astringent liquor heat that you get from 100% BA beers, but it really allows the other ingredients to shine. Instead, the barrel-aging contributes just a bit of tannin to prevent the sweetness from becoming cloying and a hint of vanilla to really play well off the chocolate and pecan. The rye contributes a tiny bit of spiciness that isn't particularly noticeable until it warms a bit.

Mouthfeel - Full-bodied and viscous, with moderate carbonation that seems to work better as a counterpoint to the body than as a stand-alone element. It's just enough to prevent the beer from feeling flat on the tongue. Bittersweet finish rounds out the drinking experience.

Overall, just a really good beer, and while I think I prefer the original, without the chocolate, this one is good enough that people's preferences are going to largely determine which they like better, rather than it being determined by the fact that one or the other is a genuinely better/worse beer. I'll be interested to see how this beer changes, since I have another bottle that I may sit on for a few months.