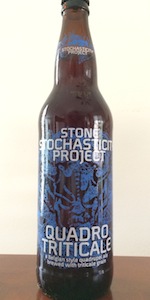 eyes...
audible head sizzles and calms down in a few seconds, the head settles in to more of a coating and hangs out at that level, the lacing is really nice and clingy, medium brown color with a good amount of very tiny bubbles, decent looking glass o' brew

nose...
grainy sugar (brown sugar?), faint molasses, fresh bread yeast, chlorine dough (in a good way), pretty unique nose... not sure what to make of it

taste etc...
the first thing I noticed was the smoothness of the carbonation (even before any flavor - the feel is near silky), light molasses with an almost booze kick (it holds back just enough), dark fruit notes emerge later on in the glass balancing out the brown sugar
notes, some quads have an almost wine like quality, the grain balances that out here

verdict?
tasty. not too sweet for this non sweet tooth. A caged beast, this has a lot going on but seems in control. Delivers a nice punch and hits a lot of good notes.

S – Triticale overload here, this is okay if you are a fan of triticale, it is unique I'll grant them that, but this is really lacking balance and comes across quite sweet.

T – Triticale again, but it is more thoroughly balanced with rye spice and is much less sweet than the nose would lead you to expect. Some light dried fruit notes on the finish.

O – Very dominant with the triticale. It is a good beer if you like triticale, I think they could have done much better, and this would be absolutely ridiculous if it were barrel aged.

Poured from bottle into a chalice glass

Appearance – The beer pours a deep mahogany reddish color with a bit of haze and a small head of fizzy white foam. The head has a light level of retention, fading over time to leave a good deal of foamy lace on the sides of the glass.

Smell – The smell of this one is a bit odd. It is very grainy with lots of darker fruits; mainly of just fig and raisin. Along with these aromas are some rye bread and a little bit of yeast as well as bits of booze and spice.

Taste – The taste begins with a mix of spicy grainy bread with a decent showing of spicy rye and darker fruits of plum and raisin. Soon after the initial tastes even more fruit flavors come to the tongue along with more spicy flavors and a bit of a hop flavor of an herbal nature. Some yeast and a bit more fruit and spice, as well as some boozy tastes come to the tongue as the taste advances. With some lighter hop tastes of a more herbal and earthy taste coming to the tongue at the end, one is left with an odd grainy, fruity and boozy taste to be left on the tongue.

Mouthfeel – The body of the beer is lighter for a quad of 9.2 % with a carbonation level that is on the average side. For the style a little thicker body may have been slightly better, but overall, for the mix of odd flavors, the feel was OK.

Overall – A decent brew, but a little off in flavor for me. A decent quad, but not really worth the $8.99 price tag in comparison to other more renowned quads.

Poured straight down into a snifter. Produced a nice two fingers of off-white foam, floating above a deep, reddish brown beer.

The smell is very nice. Big molasses scent, some fig and black cherry, as well as some spritely yeast notes. The taste follows with the same dark fruit and molasses, with the yeast and rye-like triticale marrying into a fresh-ground black pepper and clove flavor. The flavor finishes with a soy sauce-like umami character that becomes much more apparent as it warms. The mouthfeel is viscous, but not overly so, making the beer surprisingly drinkable, despite its sweetness, and high alcohol content.

The first beer I've tried from Stone's pet project, and I quite enjoyed it. A distinctive take on a Belgian classic that has some decent aging potential, though I'm not sure how the triticale character would fare over time.

A: poured into a snifter to a deep red that's a little brown with a finger of dense light tan head that retains well and leaves solid lacing
S: smells of belgian candi sugar, dark fruits, caramel sweetness, and some spices. this beer smells absolutely amazing
T: taste is sweetness and candi sugar with some nice dark fruit flavors and some light spice flavors. fairly sweet throughout the drink. swallow is more candi sugar, caramel and dark fruits
M: this beer has a moderate weight on the palate with soft but adequate carbonation and a drying finish
O: one of the best American Quads I've had. great flavors, a killer nose and solid complexity makes me wish this beer was a rotational thing instead of a one time only release.

9.3% ABV. Reviewed live as a quadrupel per the label. Expectations are average given the brewery. Served cold into a snifter and allowed to warm over the course of consumption.

HEAD: 1 finger wide. Beige colour. Nice thickness, fullness, creaminess, and frothiness. Supple and soft-looking. Retention is good - about 6-7 minutes. Leaves a gorgeous coating of even lacing on the sides of the glass as it recedes.

BODY: Vibrant mango-red. Much brighter than any quad ought to be. Translucent and glowing. Nontransparent. Clean; no yeast particulate or hop sediment is visible.

Overall, it's not a great appearance for a quadrupel, and doesn't exactly scream tradition, but nothing about it is egregious.

AROMA: A hint of vanilla, ripe bright fruit, booze, overly prominent fruit hop character, caramel, light fig, candi sugar, and a sweetness I'd call treacle-derived if not for how sterile and clinical this beer feels. Leave it to Stone to take the soul out of Belgian yeast; this has none of the rich vitaminy Trappist yeast character you'd expect in a refined beer in the style. Evokes an untoward raw sweetness that oughtn't be here. Lacks the dark fruit characteristics that define the style; where's the plum? Date? Fig? Its weirdly hoppy leanings do it no favours, and the aroma is wanting as a result.

No over off-notes or spices are detectable.

TASTE: Vanilla-forward, with a terrible tangerine sherbet note that betrays the style completely. Not that the fundamentals are here anyway; there's no Belgian feel to it - let alone Trappist. The yeast has lost control, and the sweetness that ensues is largely unpleasant, but I wouldn't hazard cloying. The body is a weird Americanized mix of caramel, Belgian pale malts, pilsner malts (why!?), and Belgian candi sugar. The fruit profile is uncommonly bright, with none of the rich plum, prune, fig, or date notes I'd expect in a good quadrupel. Nor does it have the withered raisin or hints of wine some American styles go for. No, it's just an overhopped mess.

There's cohesion here, but it largely lacks balance. Not a gestalt build. Average duration, intensity, and depth of flavour.

I can't say I much care for it. Where's the intricacy and subtlety of a quadrupel? Where's the Trappist character? Hell, where's the Belgian character?

TEXTURE: Artificially smooth and wet (which does play nicely into the vanilla). Medium-bodied. Has an unbecoming silkiness on the open. Moderate thickness. Slight overcarbonation. It lacks the fragility and delicacy of the finest beers in the style, but it could be worse.

Overall presence on the palate is decent. This texture fails to elevate the beer, but may still well be the best part of it.

OVERALL: Drinkable for its ABV, but largely a swing and a miss from Stone. The subtlety required to properly execute a quadrupel isn't even attempted here. In fact, I don't know that this would even qualify as a quadrupel - certainly not at a blind tasting. It's direly overhopped, and the fruit profile is all over the place.

The marketing is lovely, but the beer? Wanting. I wouldn't nab it again - especially with the availability of vastly superior offerings with wider availability on-shelves. Even outside of style conventions, it's below average at best.

From the label: "Rather than follow the footsteps of the monks who forged the quadrupel...we aimed to test its inherent makeup." Bingo; why fix what hasn't been broken for - I don't know - centuries? Arrogant Bastard, indeed. ;)

Aug 14, 2014
Stochasticity Project: Quadrotriticale from Stone Brewing
Beer rating: 86 out of 100 with 884 ratings