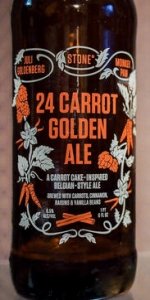 2015 marked the seventh year of our American Homebrewers Association-sanctioned Stone Homebrew Competition. Juli Goldenberg, this year’s winner, added carrots, raisins, cinnamon and more to a Belgian-style golden strong ale to create a beer that is the liquid embodiment of carrot cake.

As the name implies, this beer is richly aromatic and envelopes the palate with decadent flavors of cream cheese frosting, cinnamon, vanilla, carrots and raisins plus subtle malt sweetness, ending with a medium-dry finish. It’s nothing short of brilliant and well deserving of the 24 karat (carrot?) golden opportunity to be brewed by Stone and distributed across the country.

At first thought, "carrot cake" throws me off - like, if you asked me if I wanted a piece of carrot cake, I'd say no - but I respect the Stone collabs, and rightfully so, because on second thought, I realized that a Belgian-styled ale could carry the flavor elements gracefully.

This is really good. With the seasonal pumpkin ales and Oktoberfest beers around, it fits in real nice. Comes though like a Belgian strong pale - though more of a Piraat than a Duvel, so to speak - but somehow, despite the Belgian stylings, the beer was unmistakably American (not a criticism).

A real nice golden body and a coupla fingers of white head. Some lace arms trailed behind. Smells of fruits and holiday-ish scents like cinnamon, nutmeg, and vanilla. On the tongue, I got sweet fruits, like banana and pear, before I got the carrot or raisin. The carrot came through more on the aftertaste for me with a clearly vegetal taste - very earthy. Sweetness of honey and caramel, subtle hop action, and mild yeast presentation wash the tongue amid ample carbonation and just a hint of bitterness.

I think they did a real nice job. It is not overly sweet or heavy. Had a medium-body - felt like some tripels I've had - soft, but perhaps not as plush...

22oz bomber purchased at Huckleberry’s in Spokane for $9.49. My first “carrot cake” beer. Bottled on September 16, 2015, per the stamp on the neck, I bought this a good six months ago with the idea of splitting it with my Dad (he’s a wine guy, but Carrot Cake is his perennial choice for birthday cake), but we would always forget about it, so it spent much of that time in my parent’s fridge, 150 miles from my home. Pretty sure it won’t be terribly fresh-tasting!

Poured into a 12oz River City snifter, the clarity of the slightly coppery amber color of this beer is impressive. Initially, there was a finger’s width (I have somewhat wide fingers) of bubbly, bone-white foam, but it dropped to a slim foam collar quite quickly, leaving spotty lace.

The nose is of that of a well-made Belgian Strong Golden Ale. It’s sweet, a little spicy and slightly earthy. I just get wisps of dark fruits and vanilla, the latter of which is fine by me, as I usually find that when vanilla is put into a beer, it’s done with a heavy hand. I do not get anything that makes me think of carrots.

The flavors are much like the nose. It’s sweet, but not to the point of being cloying. There’s some dark fruit flavor, but it’s very restrained. Ditto the vanilla. There’s some spiciness, perhaps from the cinnamon, but it’s really not much different from what one would expect from something brewed with a Belgian yeast. Stretching my imagination, I can kinda see where someone would think it was reminiscent of a carrot cake made with cream cheese frosting, but I really don’t get any flavor that reminds me of actual carrots.

Fairly light bodied, with that light, slightly effervescent mouthfeel that can be elusive to American brewers of Belgian style beers.

While this somewhat falls short at making me think of Carrot Cake, it is one of the tastier Belgian Strong Golden Ales (or whatever you want to call the style) that I’ve had. Maybe if fresher, it might have been more reminiscent of carrot cake, but might have also been more off puttingly odd. I don’t know, and won’t unless Stone continues to brew this and I can grab one that’s fresh. I do know that I’m really enjoying this particular bottle.

Everyone loves carrot cake. Right? And with that culinary love deep in the heart of homebrewer, Juli Goldenberg, she teams up with Stone Brewing Company and Monkey Paw Brew for overtones of the spicy, caky, icing-y seduction upon a strong Belgian-style golden base ale. There's some stuff that you just can't make up.

Bubbly and golden, the faintly hazed ale layers in the glass with a faint trickle of orange (perhaps the power of suggestion working here). Its creamy whipped froth pulls forth the strong Belgian perfume of citrus and orchard fruit with a tinge of natural and added spice for a cinnamon and rum scent. Its initial flavors are strongly sided with the Belgian ale as bready pilsner malt springs onto the palate.

But as the taste simmers on the mouth, moderate tastes of graham cracker rise first with hints of honey, biscuit and cinnamon. And as the white pepper and vinous spices stem from the ale, additions of nutmeg and cinnamon weave into the mix with hints of almond, pecan and vanilla. Selling the tastebuds on its carrot cake character finally takes hold as the layers have all revealed themselves near the beer's finish.

With a medium but lively body, the beer's champagne-like effervescent and light creaminess keeps the textures lightened and soft. But with the spicy warmth caldering from within, the beer finishes sharp, pepper and almost hot. Spiced rum, mulled cider and graham cracker return in aftertaste for the whimsical suggestion of the vegetal desert.

I enjoyed everything about this beer. Very attractive, with relatively small lacing and not much whispy or sticky head retention like i'm used to seeing for many belgian pales.

Smell of spice, fruity esters, and some sweet aromas.

Taste is complex, with banana and clove esters from the Belgian yeast, with some malt sweetness. (or perhaps from adjunct additives.) Very little hop flavor or presence. finish is clean and satisfying.

Feel is light and clean, but not watery. Finishes dry and refreshing.

O: Very unique and interesting. There is not one factor or flavor that overwhelms another, and you can pick up on the carrot cake theme throughout. Very inventive! I'd buy again for sure.

22 oz bomber poured into a stone glass.Very nice spicy smell too it.The taste is kind of sweet with cinnamon.I liked it but not sure I would buy it again.I would have to be in the mood for sweet beer.Give it a try.

Poured into a Gulden Draak tulip. Pours a medium golden orange with a thin white head that dissipates to patches with light lacing. Aroma of Belgian pale yeast, vanilla, banana, clove and hints of carrot. Flavor starts semi-sweet, but Belgian dubbel yeast, clove, vanilla and as advertised, a bit of carrot cake; dries out quickly and switches to a clove and hop bitter, semi-dry finish that is more in line with a tripel style. Medium bodied with sharp, peppery carbonation. This is an unusual take on a Belgian pale with a surprising flavor change through the taste. I liked the Belgian candi malt start and at first the drier, bitter spice finish was a surprise, but was supported the the pleasant Belgian style malt and yeast. Although similar to a dry tripel finish, there were light residual fruit and sweet carrot flavors in the aftertaste. Interesting and different. I liked this quite a bit.

Poured from a 22oz bottle dated 9/23/15 into a tulip
A: Light orange color with a 1/2-finger head
S: Belgian yeast/malt, baking spice and carrot
T: Belgian yeast, carrot, vanilla, baking spice and a bit nutty
M: Medium-bodied, a bit sweet
O: This does match the flavors of the cake. I'm not sure whether I like that or not. Certainly worth a try and may be worth pairing but this wouldn't be one I'd drink solo regularly

Pours an orangey golden color. Great Belgian aroma. I don't detect carrots but the vanilla is noticeable with some slight cinnamon. Overall a solid beer, more sweeter than I'd like but perhaps that was the goal.

Inviting scent of cloves and cinnamon. Hot and nutty. Sweet and intensely spiced. It starts out like a crazy strong Belgian Ale. It's the aftertaste that bothers me— sugary and candy-like with that milk sugar flavor that somehow seems revolting here.

My wife thought it sounded interesting, and she likes dessert beers. The flavors are all over the place, but it's interesting to taste how they put it all together. It's actually a remarkable imitation of the carrot cake flavors. But overall, I call it "icky." From the 22 oz bottle purchased at Bottlecraft in San Diego.

Taste
Banana bread, pale candy sugar, and toasted pie crust. Earthy and clove-y bitterness along with lemony twangs. A good amount of Belgian yeast flavor. Lighter notes of carrot (only because it was suggested), green raisin, nutmeg, and cinnamon. The booze is apparent and akin to nail polish remover.

Overall
The pointless amount of bittering hops (or maybe over-spicing?) ruins this beer from being good. This beer should have been left fairly sweet if not balanced.