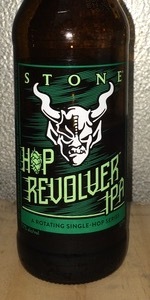 Notes via stream of conscious: Great looking bottle. Great looking beer. It has an almost fingerprint-through-the-glass clarity which is surprising for an IPA, especially one that you'd think would be dry-hopped; and it's an orange-ish gold in color. Unfortunately the short head of white doesn't want to stick around for too long and that kills it. The aroma is orange-like, but there's also something that's like pineapple with the weird kind of funkiness that goes with it. Beyond that there's some malt that appears bready and lightly caramelish. Aaaaannnd... I'm not surprised that the flavor follows, but at least the weird note is pretty much gone. The orange is there, and the malt is caramelish, almost like burnt sugar but only if there was a little bit of it. Honeyish as well, I guess, and to a certain extent there's a little bit of an orange marmalade to it. But there's also a raspiness to it... is that alcohol? How strong is this? 7.7% ABV... probably not then, but it could be. I'm guessing it's hops, that there's some low-level spicy and grassy hop notes in there. There's some apple-like fruitiness as well, and some mango, and that makes me think, it's a little like a rotting apple as well, overly-ripe and fermenting, but with a bit of a funky edge. It's solidly bitter, up there, but still balanced for an IPA, and it doesn't really even seem that bitter until the finish. Ahh, I get some melon flavor in the end, and a touch of pine as well. Interesting. Overall probably a bit heavy on the depth of character of the malt though. Or not, it's hard to say as it's fairly well balanced right now - you know, given that it's a Stone IPA. Ahhh, I have to throw my hands up on that one. Medium bodied with a dextrinous side. Gently crisp. Smooth.

The body was hazy, golden colored, and topped with a one finger thick head of very fine bubbles. The aroma was very mild for the style, with a faint floral and citric hop note that required deep inhalation to uncover. The taste was quite malty for the style and frankly reminded me of Oktoberfest beers rather than any IPA. The malt was caramelized and sweet, and quite delicious and the hops were restrained until the end of each sip, where they added a bitterness that lingered. the beer did feel nice on the palette, and was easy to drink. I would say this misses the mark a bit from what an IPA should strive for.

Aroma is orange blended with pine and herbs, interesting, different; malt comes through as well with light sweetness, maybe some toast.

Taste is similar with a notable orange component, subtle pineapple note as well, touch of sticky sweetness (not caramel like but sugary), malt is noticeable but not emphatic.

Poured out a clear, golden-amber color with a small, white head of foam. It smelled of citrus, grapefruit and hints of pine. Sweet citrus and caramel flavors with some bitterness and grapefruit.

This was a clean and light brew, with subtle citrus and tropical hops. It was very enjoyable and easy to drink, but ultimately just another forgettable IPA from Stone.

Taste: rich and deeply hopped, with a lot of fruit intensity and tropical notes with pineapple, grapefruit, and orange dominating. Really a superb and standout IPA.

Hop Revolver IPA brewed by Mandarina Bavaria , Stone Brewing, with an ABV of 7.70% This American IPA pours out a deep golden amber color with a nice white head. There is also a nice amount of lacing to this brew, it sticks to the side of the glass well. The smell is rich with hop bitterness, and earthy grains and malts. You also pick up on a mild sweetness in the smell of this brew as well. So far this is a nice inviting American IPA. Now for the taste,bit is bold with hop bitterness. You also pick up on a good amount of earthy grains and malts as well in the taste. If you are not a fan of hops this is not the brew for you. It is really hard to pick up on the 7.70% ABV in this brew. This American IPA goes down nice and smooth. There is nothing really overpowering about this brew, it has a nice balance to it. It is hoppy, but it is to be expected with this type of brew. The mouth feel is Bold, Hoppy, Clean, Smooth and Refreshing. Overall I'm going to give Hop Revolver IPA a 4.25 out of 5. I would definitely look this brew up again giving the opportunity to. Mandarina Bavaria ,Stone Brewing, did a super nice job with this American IPA.

Medium gold color and clear, fat ivory head, lotsa lace trails behind... Looks like a 7/11/17 bottling, so not quite as fresh as I'd like, coming out of the Stone Mixed 12 Box... Lotsa of sticky, sweet, almost chewy orange; resinous, maybe a bit of pine shellac... Medium-bodied, mildly bitter... Orange-forward beers really aren't my thing, but I'm warming up to it. Got two more from the box to see if my initial impressions are swayed...

Well crafted IPA using a lesser know hop in the Madarina Bavaria. So its chewy, earthy, moderately bitter but nice malt balance with full body. Not the best hop of choice but its a well made and very solid IPA. Enjoyed.

Hoppy to be the 3rd reviewer of a Stone revolver. This is the weakest of the three I have tried. However, it raises as it warms to cask as do most great beers, so let it warm

A) body was CLEAR, golden,, and topped with two fingers of thick head of lasting, lacing, condensing, latte-like, fine foam.
Nice looking lacy lather.
S) Aroma was too mild (even after it warmed) with faint floral and citric hop notes, and when warmer, shellac and pine.
T) More malt than expected. The hops are candied, chewy, and floral with a bite of crisp citrus. The sweet, caramelized malt dominates but is delicious and tempered by the bittering, slightly floral & dank hops.
F) Good feel on the palette, nice food beer, more of an EIPA or even a malt-forward ale.
O) Must try 6.