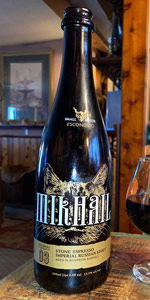 Pours jet black with no head and low carbonation.

Tastes of dark fruit and coffee right off with a nice booze balance. Along with that, the barrel, char and dark chocolate all work together wonderfully.

Near black with a one inch creamy off-white head.

Nose: All espresso with a slight hint of bourbon/vanilla.

Taste: Espresso again up front but with a bit more chocolate backing it up and a dose of herbal hops on the finish. Minimal barrel presence.

Reviewed by Wolvmar from Michigan

Pour: black with a minimal brown head that dissipated quickly and left little to no lacing. 3.5

Taste: Pretty much follows the nose with sweet malt, coffee upfront and bitter chocolate on the back end. Really good. 4.5

Overall: a really good, maybe great coffee stout. Easy drinking despite the ABV. Absolutely worth trying, will pick up another to cellar. 4.25

SMELL: Roasted and burnt espresso beans on this one. Charred. Some dark chocolate, oak and bourbon aromas, vanilla cream and butterscotch as well. Well put together.

TASTE: Roasted coffee flavors up front, with bourbon, oak and some vanilla cream as well, then some wood and alcohol at the swallow. Flavorful finish of wood, bourbon, vanilla and butterscotch sweetness, as well as some bitter dark chocolate and bitter, roasted espresso beans as well. Charred espresso and somewhat boozy.

PALATE: Medium body and slightly higher levels of carbonation. A touch foamy perhaps, goes down a bit prickly with a bit of a scratch and finishes somewhat mouth-coating. Some heat lingers.

OVERALL: This is alright. The coffee is a little overly roasted or burnt and it’s a touch boozier than it needs to be, but it’s certainly enjoyable, especially for those who like coffee-forward stout beer. I’m a fan, though I do with it was a little creamier as opposed to charred. I’d also like a bit of a silkier mouthfeel as well. Nevertheless, Stone makes good stuff and this one falls into that category. Thanks again, rutger!

Appearance: It was black in colour with a half finger brown head that dissipated quickly and left only sparse to no lacing.

Overall: Really enjoyable drinking, as its rich and smooth with velvety chocolate, and nice barrel notes expressing bourbon and vanilla.

Reviewed by bobhits from Kentucky

Taste - Mikhail is a coffee bomb bringing with it the citrus, the dark burn beans, and the lingering ground espresso beans out in their fullest. I've had coffee that tasted less like coffee. The back is a rich and heavy stout providing chocolate, vanilla, light hops, and intense sugary sweetness.

Simply one of the best dessert beers or maybe a saturday wake me up?

Rated by Sandis from Minnesota

4.41/5  rDev +1.4%
look: 4.25 | smell: 4.5 | taste: 4.5 | feel: 3.75 | overall: 4.5
I can't believe how potent the espresso notes are considering this was brewed 20 months ago and bottled 10 months ago. Up front I tasted robust barrel notes of vanilla, boozy sugar, and a woody char that lingered a bit into the finish that was otherwise straight up deeply roasted, wonderfully flavorful espresso. Some of the strongest coffee notes I have ever found in a beer.

Very satisfying overall and worth a try for sure.

Over barreled. More whiskey than expresso stout. Way too thin for the taste profile. Did I hold onto this beer too long (unintentionally)? 3.25

A – Pours an opaque black. Very effervescent with the pour. A short-lived brown head. No lacing. Minor alcohol legs. 3.75

4.46/5  rDev +2.5%
look: 4.25 | smell: 4.5 | taste: 4.5 | feel: 4.25 | overall: 4.5
500ml bottle. Caged and corked. Bottled in October 2017.
Black colored body, with a thin edge of dark brown back lit highlights. One finger of tan, fizzy head quickly goes away, leaving a very active top surface. I see one small of lacing after the first sip.
Aroma is rich with coffee/espresso and notes from the oak barrel (bourbon, vanilla and caramel). Quite impressive for the age in the bottle.
Taste introduces the fudge chocolate to the mix of coffee, dark fruits, oak/bourbon, vanilla and caramel. The aftertaste is very mellow with coffee and vanilla, with a touch of fudge.
Thicker mouth feel, with a mouth coating texture. Good carbonation.
The entry of the fudge chocolate in the mid portion of the taste profile really adds to the depth and richness of the beer's taste. Otherwise the coffee/espresso would dominate and make this a barrel aged coffee beer. Really has a swirl of flavors that blend and balance very well. Higher ABV% is well hidden. This beer is remarkably easy to drink.

4.29/5  rDev -1.4%
look: 4.25 | smell: 4.5 | taste: 4.25 | feel: 4 | overall: 4.25
Poured jet black from the bottle, with light brown lacing. Smell is powerful espresso with dark chocolate, a wonderful pairing together, plus complementary salt, caramel, bourbon, almond and marshmallow. Taste is fudgey, with robust coffee pervasively throughout. Nice waves of bourbon, charred wood, dark fruit, caramel, almond, vanilla, with then a finish of hot booze with espresso. Not very balanced but intense, yet highly textured from the espresso. It's no fyodor, but it is pretty, pretty good
Mar 21, 2019
Rated: 4.31 by Biggiekrock627 from Maryland

Okay, these f**king corks are a real Russian bear to get out of the neck! They are quite long & since I do not have a nice corkscrew with lever arms, I was forced to simply pull it straight up. I cannot tell you of the cold flop sweat that emanated from my body as I held a $17 irreplaceable bottle between my thighs while I tugged on the embedded corkscrew with both hands! I have a third bottled beer, but since it is a) not Russian-style & b) another corked masterpiece, I am holding it in abeyance until I can either procure or borrow a better corkscrew.

F**ksake, this is more work than I envisioned! I gotta talk to Greg about this on our next meeting. Once the pesky Gorky cork was out, the real fun began. I was now anxious to try Fyodor's goofy cousin. I am our family's black sheep goofy cousin, so this beer & I should mesh beautifully. In pouring it, the first thing that I noticed was that the two-plus fingers of head were not as dark as on Fyodor. Instead, it was more Deep-Tan/Light-Brown than simply Dark Brown. Rocky, dense, foamy with good retention & light lacing. This seemed to be more my speed (or perhaps I was slowing down after Fyodor). Color was also lighter, Very Dark Brown to Black/Opaque (SRM = > 34, < 44), allowing cola highlights to peek in at the edges. Nose was rich & redolent with coffee, but not simply coffee. Espresso! I remember my first trip to Rome. We flew in from La Maddalena, Sardinia & while awaiting FFT, we went to the airport cafe. Signora, caffè per favore. I was already starting a career-long habit of speaking the native lingo. She presented us with these wee tiny cups that put me in mind of a children's tea party with one of my female neighbors & her stuffed toy animals! 8=O Caffè? Si, caffè! One sip & I felt like my heart was going to pound its way through my breastbone & out of my chest & go running up one of the seven hills! OMFG! This beer = that! You may have heard of alcohol & beer as a depressant, but this was amping me up to the point that I was going to plug myself into my circuit breaker & power the house on my own for the afternoon. Bump PPL! Mouthfeel was less impressive than in Fyodor, but that is a minor point. I really could not taste or perceive much more than espresso in/from this one, but it was enough! It was the combination of caffeine & alcohol that got FourLoko initially banned & then retooled to disinclude caffeine. I now understand why. I should be drunk & ready for a nap, but I am wide awake. This is potent & potentially deadly! Whoo. Sadly, the espresso flavors were SO overwhelming that everything else, including the Bourbon Bbl.-aging, was getting lost in the mix. How do you rate something like this?!? As an RIS, it was kind of unbalanced in favor of its espresso flavors, at least in its youth. With aging, who knows? My health has me living for the here & now so you may have to report back, even/especially if I am gone. Finish was dry & bitter, in the way that espresso is dry & bitter. Is that your bag? It certainly is mine, but YMMV! The other consideration was the price point. Did I get my $'s worth? I would say so, but then the Q arises as to whether I would drink it again. Perhaps, but next time for sharesies, including the buy.