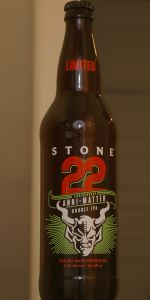 Notes: Stone Brewing has spent over 20 years pursuing clean, bitter, hop forward beers. It would be passé to suggest this beer is simply another gigantically juicy and extremely complex Stone Double IPA. It’s a middle finger to the haze craze proving that clean, crisp IPA’s can still be smashed full of big, juicy, tropical flavor. It’s also the winner of our 2018 Spotlight Series contest, which pits teams of brewers against each other to see who can brew the best beer. Citrus takes the forefront, with plenty of fruit character to back it up. With incredible mouthfeel from the malted oats, the beer isn’t sweet at all, but its light amber color would make you think it is sweeter than it tastes.

Other reviewers are pretty much spot-on with regards to color, opacity and head. My pour from bottle to a shaker is not what I'd describe as hazy; far from it, but also not crystal clear.
Citrus aroma through the nose and on the exhale. I'm not getting the berries, grape or floral to the extent others have mentioned....nor dankness.
Bittering lingered and was pleasant without regard to whether it suits the style. Very noticeable but not overpowering malt.
Those two together helped to mask the 9.1% ABV.

Overall, nice.....liked it and would have again. It would be easy to drink too many, too fast.

BikeChef from District of Columbia

Not much showing on the nose. On the palate, some citrusy hops and a fair amount of malt; low bitterness; soft-ish body from the oats. This is sorta like a throwback, old-school, malty, not-very-hoppy-by-today’s-standard DIPA crossed with the mouthfeel of a NEIPA. I’ve always loved Stone, but I don’t really love this.

This whole quarantine/lockdown/fast cruise business has done wonders for me in terms of clearing out massive swaths of the backlog here at Chez Woody! This latest renewal of a long-standing love affair with Stone Brewing began with me simply pulling out a couple of CANs, but then it became like tugging on a pesky loose thread on a knit sweater. Soon, I was left facing a bundle of unraveled string in the form of a massive mess of Bottles (gasp!) & CANs! OMFG.

From the Bottle (!): "Limited"; "The No Haze Double IPA"; "Stone 22nd Anniversary Double IPA is a clean, crisp perfectly filtered IPA that reinforces giant, juicy, hop forward IPAs are a bailiwick of ours. Every year we have a special recipe creation challenge with two-person teams from our brewing department we've called the Stone Spotlight Competition. This year's winner 'Anni-Matter' was brewed (and named) by Stone brewers Jason Smith and Jose Flores. We felt it was a perfect candidate for our 22nd Anniversary IPA as it's not only an amazing IPA, but a perfect way to showcase the deep bench that is our talented and dedicated brewing team. This light amber colored IPA features an incredible mouthfeel from the malted oats. Citrus rides in the forefront, with plenty of fruit character to back it up. All in all, we felt this was the perfect IPA with which to say: Here's to me, to you and twenty-two too!"

I was anxious to Pop! the cap on this bomber & get started since I can always finish the transcription later. I gave it a slow, gentle C-Line pour into the awaiting glass & sat back in rapt fascination as it formed two-plus fingers of dense, foamy, rocky, tawny head with excellent retention. Color was solid-Amber (SRM = > 7, < 9) with NE-quality clarity. Nose had lost the bitter edge that some earlier reviewers mentioned, becoming quite palatable in the process. It was tending towards sweet with the tropical fruits from the hops as well as a caramel malt quality beginning to appear. Okay by me! Mouthfeel was medium-to-full, a little light for the style. The taste was plenty bitter, have no worries about that! It made me think of a tart guava beer that I drank recently, along with the pith & rind of grapefruit. Phew. If it were more bitter than this when first released, I have a tough time imagining it! Not to say that it was tough to drink - au contraire, mes amis. I was really digging it as a self-described, self-avowed hophead. I live for this sort of thing. The thing that I really noticed, or more precisely, didn't notice, was its ABV. 9.1%?!? Hard to believe. Finish was pleasantly dry & bitter, just the way that I like 'em. YMMV.

Stone 22nd Anniversary Anni-Matter IIPA - 9.1% ABV - 81 IBUs
Date: 07/24/18, enjoyed on 8/17/18.
Appearance: The color is mix of dark amber and orange and it produced a finger of off white head.
Aroma: Hefty aromas of assorted sweet tropical and, specifically mango, orange, and a little apricot. The malts adds a typical caramel sweetness and according to the bottle, this was brewed with oats which is fairly apparent on the nose. There is also a light dank quality floating somewhere in the background.
Taste: The malts on this one are certainly more pronounced than usual for a Stone beer, but hop heads need not worry, Anni-Matter is very liberally hopped as well. The taste is close to the nose with pine, mango, grapefruit and caramel notes. It has a very nice thick and creamy mouthfeel thanks, I’m sure, to the oats, and the accuracy with which it balances that abundance of hops and malts is impressive. It is, as one would imagine, bitter, but the malts sweeten it up as it sure doesn’t taste like a beer with 81 IBUs.
Biased comments: This is a good beer, no doubt about it. More thick and syrupy than I generally like warm weather IIPAs to be? Sure, but for something familiar but a bit different at the same time, this is a winner.

Goes down like a pale ale, while punching flavor like Broke Lesnar. Balanced tropical taste without being sweet. A gift from the Beer God'd of Valhalla

From a bomber, this brew is absolutely beautiful...clear, amber-gold, with a thick white head...rocky, dense, and stable. The aroma is fresh, resinous, and has some citrus rind as well. The taste is intense...sweet, bitter, malty, and solid. The finish has a musky, hoppy, bitter note. What I would expect from Stone.

Notes via stream of consciousness: It's poured a slightly hazy deep amber body with an orange sheen and golden highlights when held to the light. The head is a two-inch cap of fluffy off-white foam. In the nose I'm finding candied orange, soft peach and pine or spruce (it's fairly soft), some sweet bready malts, and tropical fruits beyond that. It's fairly bright and welcoming, and somewhat original. The flavor follows without adding much, just some caramel in the maltiness as far as I can tell, and some alcoholic strength, although the pine is definitely a fuller. It's still interesting, and quite pleasant, and I imagine it will 'shift' a bit as it warms and your tastes become accustomed to it. A solid bitterness balances it and it finishes dry with fruit that fades quickly as herbal, piney, and minty notes rise. Bitterness and a spritz of alcohol linger. In the mouth it's medium bodied with a dextrinous edge, and a crisp, standard carbonation level. As an anniversary beer... I don't know. Maybe it could be bigger, or more different, but at the same time it's a Stone beer so it's kind of hard for them to top themselves and thus I won't complain about this fairly excellent double IPA. I'm only halfway through it but I want another, although I'm pretty sure the alcohol will wack me by the time I get there.
Review# 6,241

Beer poured deep gold with a gorgeous white head that is super long lasting and leaving lacing behind.

Nose is citrus forward, quite nice.

Overall a nice style choice by Stone, fits with what they are all about!

The beer looked typical for the style, as the pour was golden amber in color, and the head was rather small. The aroma was a treasure trove of citrus fruits, evoking grapefruit, tangerine, and blood orange. The citrus came out big time in the taste too, as there was a bracing grapefruit pith bitterness with a ton of citrus juiciness to follow. The alcohol was scarily well hidden, and drinkability was off the charts. The feel was sticky, and the aftertaste was prolonged and full of bracing bitterness. This is a breathtaking DIPA.

12 oz bottle. Pours clear light copper gold with a small creamy white head that quickly goes to a thin film that laces the glass some.

The aroma is sweet cracker malt and lemon with some spicy and slightly tarry hops.

The flavor is sweet bready malt and lemon a little rye and some spicy and slightly harsh hops. The mouthfeel is medium to full bodied with smooth carbonation.

Overall, a decent DIPA, but not one of Stone's better ones.

Overall: Congrats to Stone on 22 years! This is a nice DIPA, new school hops and not very bitter. Stone still makes some really nice IPAs and this is a good one.

Amber colored and clear. Mild head but it provides several thick rings on the glass.

The smell leans to the hop but overall the nose is well-balanced.

Up front, there's a mildly sweet, fresh crushed blackberry flavor. The bitterness never overwhelming but it is distinctively dry with a black pepper overtone. This creates a long lasting aftertaste. The body leans full but this may be exaggerated by the very low carbonation.