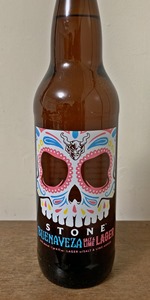 Notes: Stone Buenaveza Salt & Lime Lager was born here in Southern California, which is vibrantly influenced by our neighbors to the south. SoCal's warm weather lends itself to outdoor activities year-round. From surfing our coasts, to snowboarding and biking in the mountains, off-roading through deserted lands, or boating and fishing in our lakes and rivers, this Baja-inspired lager is the perfect companion. Brewed with just the right amount of lime and sea salt, it’s everything a lager should be – crisp, refreshing and full of flavor.

The name is pretty simple: we took “Buena” for good and “-veza” from cerveza. Because we’ve always believed good beer is an important part of a good life. So raise a glass (or can) with us to the buena vida.

Pours a bright and effervescent gold with a thumb of pearl white head. Some lacing & head retention

Alright for what is, drinkable enough, glad I only bought a single

I love being a regular at the Friendly Greek Bottle Shop (FGBS) here in Lancaster, PA! The owner knows that I am working some insane hours (ten per day, six days per week) & sets one of each new CAN aside for me as well as those bottles (gasp!) that he thinks might have appeal to me. This one was apparently only available in a mixed-12 pack & broken open to parcel out to the regulars. Yay!

From the Bottle (eek!): "Lager w/Salt & Lime added"; "Baja Inspired, San Diego Brewed"; "In 1996, Stone Brewing was founded in San Diego County, just minutes from the border. Since then, influence from our southern neighbors has enriched and inspired us on our undying mission to brew bold, flavorful beers. One such inspiration is Stone Xocoveza, our imperial stout originally released in 2014 to bring the rich, complex flavors of Mexican hot chocolate to beer. It’s with mucho gusto that we now follow with our take on a classic lager that is similarly inspired (and tasty) - Stone Buenaveza Salt & Lime Lager."

I Pop!ped the cap & allowed it to run rather freely into my awaiting glass. It returned the favor by forming two-plus fingers of foamy, soapy, rocky, bone-white head with above-average retention. Color was Straw-Yellow (SRM = > 2, < 4) with filament/button brightness. 8=O Nose smelled pleasantly of lime squeezed into an adjunct-free Lager. Mmm. Hey, just because a mass-market fizzy yellow beer is famous (infamous?) for doing it, that does not automatically render it wrong. This had the nose of an all-malt Lager, which is how it should smell - not like the rubbish that marked the early days of The CANQuest (tm)! It was more lime than salt on the nose, although the salt was perceptible. Mouthfeel was thin-to-medium, about on-par for a Lager. The taste was pleasantly crisp, malty without being overly sweet, absent of any real hop bitterness with a lime & salt quality that was evocative of afternoons on the beach. Finish was in that twilight zone between semi-sweet & semi-dry, making it quite refreshing. They ought to make this more widely available & put it in CANs! YMMV.

Review #1407
I have tried to support my local businesses during these crazy times. I saw this beer and it was the last one in the case. I thought what the heck. I checked the date and discovered it was still fresh. Not sure what to think of this beer. Is this a Corona with more flavor or something like a Gose. The artwork on the can is unique and colorful. The beer is 44 degrees and served in a pint glass. After I opened the can and citrus and malt aromas emitted. The pour of the beer created a foamy and airy head. The head dissipated quickly leaving no lacing on the glass. The color of the beer is SRM 4, straw yellow with golden hues. The beer is clear with active carbonation.

The initial aroma in the beer is lightly toasted malts, lime, sea air, biscuit, a hint of floral, and a touch of herbs.

The mouthfeel of the beer is carbonated and clean.

The body of the beer is light, medium carbonation, and a light finish.

The beer reminds me of a bud with lime. The flavors are stronger than a Coors. The lime in the beer is there and subtle at first then stronger later. The cereal grains in the beer develop and gives the beer a malty sweetness. I was wanting a crisp easy drinking beer but this beer is somewhat malty and cumbersome. It was okay.

Pours a pale amber with a tight white bubbly head that quickly dissipates.

Salt, grain, lime, in the nose.

Bitter citrus followed by lime and salt with malt mouthfeel.

Liked my first one but it's been downhill every since...

There's some sort of weird aftertaste that I get that just doesn't sit well with me... perhaps it's the mixture of salt and limes, which I usually enjoy... tastes... sort of dirty?

Wont be doing this one again...

Pours a straw yellow with a thin white head that leaves the glass quickly. Smells grassy, malts, just a hint of lime, nothing overbearing. Taste very much follows the nose, it has just a touch of lime flavor, doesn't totally take over the other flavors of the beer; also has a savory/salty taste. Light-bodied, high carbonation, crisp, clean & crushable.

I am not a tequila fan but I trust Stone so we will see where this goes. Grain and lime line the nose and there is little head to speak of. This definitely has the malt profile of a typical Mexican lager and the salt is also a factor, but this is basically a smooth, easy drinking lager at its base. I don't love the aftertaste but these go down smooth.

A very solid gold color and good lighter mouth feel as a proper lager would have, but not terribly effervescent, or overpowered in the salt and lime flavors, leaving it well made but short of the mark in my opinion.

Wow! What a light & refreshing lager! I don’t thing I overrated Stone Brewing’s Buenaveza Salt & Lime Lager. Pours a very light gold color with a healthy white head and the tiniest bubbles constantly rising from the bottom of my glass. The constant hissing & fizzing coming from the lagers foamy white head and bubbles creates a subtle ‘beer’ aroma, refreshing crisp lime/lager flavor and clean mouth feel. What a perfect lager this is for a hot summer day or evening. You nailed this one Stone brewers!

Surprised how it looked like a light beer and had no distinct smell, but the taste is delicious! It is a margarita light that any beer loving person would enjoy!