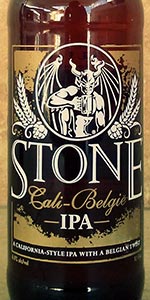 Stone Cali-Belgique IPA features a complex and surprising combination of flavors, but behind the fancy title is the simply delicious Stone IPA. The addition of a carefully selected strain of Belgian yeast adds banana and spice notes to the hoppy brightness of our flagship IPA. Think of it as an otherwise identical twin to Stone IPA that was raised in a Belgian culture. Literally.

found this just this weekend, bought it rigth away just becuase it's got "cali" in the name

T: honestly the FIRST time I've really liked a belgian. this is nice, bright but not overly citrus.

M: not too heavy, ABV is nicely discreet

D: great for the abv. no bite at all.

fairly muted aroma, slightly phenolic with some mandarins and citrus

Doesn't really hit the mark imo, it's neither one nor the other and the two parts jar

And at 6.9% it delivers too little for its strength

Big fan of stone and the initial smell of the beer had me excited, but I didn't think the hops and belgian style quite worked here.

Haven't had many Belgian IPAs, but Flying Dog Raging Bitch is what I would recommend if you want one. For stone I will stick to their other great IPAs if I want some hops

Stone brew new to Alberta number two, bomber poured into a tulip. Nice looking brew, light bronze amber with a fluffy, resilient off-white head rather like meringue. Leaves nice concentric rings of lace around the glass. Aroma of fresh grapefruit, burlap sack, cloves, a little orange as well, light caramel. Ample rustic Belgian yeast and sturdy citrus and pepper hops. Palate is quite wonderful, one of the better compromises between yeast and hops I've observed in this rather murkily defined style. Impressive resinous green bitterness coupled with grapefruit, lower key orange and pineapple, green banana, medicinal phenols to a surprising degree. Moderate body with some heft and similarly robust carbonation. Finishes intensely bitter and dry, decent pucker power that recalls more citrus rind (lemon with no juice to sweeten things), floral tobacco, herbal tincture and flinty minerals. I am enjoying this brew's bucolic intensity and unapologetic spicy edge. Smooth mouth feel despite these traits. Stone may be old news down south but this ought to make waves up here.

A - 4 - Poured a semi-translucent gold with slight tinges of orange. Colored is that of a standard domestic brew. Really nice had potential and retention on this beer, formed up a 3 finger, dense and creamy bright white colored head. Spotty lacing.
S - 3.75 - Aromas of clove, light smoke, light bubblegum from the yeast strain and VERY distant hops. Not necessarily bad or good, just odd.
T - 3.25 - A little weak on the flavor. Would make a good transitional IPA. Faint hints of Belgian yeasty. Nutty, bubblegummy spicy yeast is very faint and past this there isn't much else going on unfortunately. More bitterness would take this IPA a LONG way.
F - 4.5 - Nice, smooth and oily mouthfeel.
O - 3.75 - This is an alright IPA. This is what I called a food pairing, lawn mower and shower beer. Very sessionable and easy to throw back. If you're an absolute die hard fan of the Belgian IPA style, then you might want to seek this one our, otherwise, it isn't anything crazy special.

The smell is interesting - tart-ish funkyish Belgian yeast with a citric hoppiness. The yeast strain seems to dominate the hops at times. I found that they don't necessarily clash - but almost.

The taste follows the nose to a tee - tartish, bready yeast with a firm, but not strong, citric American hop bitterness with some maltiness. Finishes bready and dry.

Doesn't quite have the Belgian body, more of a medium IPA-ish one, which is fine, but nothing particular special about the body, to me.

As much as I love American hops, I think this is decent, and a great idea, but it just wasn't what I was hoping it would be. There have been Belgian IPA's I preferred over this, and another American brewery's attempt that I prefer as well. Nice enough, but didn't come together quite the way I was hoping. Still, worthwhile to try, as it is interesting and creative.

According to the label, about half say Cali-Belgie (Flemish) and the other half (the one I have) is as it is listed here (French). Cool that they thought of both Belgian cultures.

On tap at Armsby Abbey

N: Nose has some light hops as well as sweet malts and yeasty tones and a touch of nuts, some citrus and spice from the hops

T: Taste starts with some interesting sour sugary notes, lots of raw sugar taste, an interesting fruity center and slight creamy taste, some interesting Belgian yeasty taste mixes with a slight hoppy taste, somewhat like a Belgian IPA and reminds me somewhat of Hopsinjoor, it also has some bright citrus as well as a chalky dusty cinnamon taste in the middle

M: Mouth is juicy with a lot of carbonation and kinda thin

F: Finish has some strong bitter hops and spicey hops with grassy earthy taste that maintains its sweetness as it leaves a huge bitterness on the tongue

Final thoughts: An interesting beer that combines two great beers, as many have done before it, that don't usually blend well. Even with stone doing it, it doesn't blend perfectly but they do a pretty decent job of it. It doesn't have many qualities of either Belgian tripel or Cali style IPA, but slight parts of each rounded pretty well. Its not something to drink every day but occasionally it's an interesting change.

Poured from a 12oz bottle into a shaker pint.

Look is a darker yellow with a thin full head. Absolutely crystal clear.

Lots of spicy Belgian banana in the aroma.

Taste is more of a blend of IPA and Belgian than the aroma is. Lots of estery Belgian spice and banana then hit with deliciously bitter hops.

Straight up drinkable. One of the better Belgo-American IPAs I've ever had. Smooth and subtle.

Found one bottle of this gem on a shelf in a local beer shop today. A lucky find indeed. A well made Belgian ale that has impregnated an ultra hoppy Stone IPA to conceive a deliciously complex sweet, bitter nearly perfect beer. Really, this everything I look for in a beer - not sure how readily available this brew is, but if you find a bottle, grab it and gives this bad boy a shot. Highest recommendation.

Poured from a 22 oz bomber into my Duvel tulip.

Pours a bright golden color, with light orange tints around the edges. Slight head quickly recedes into a thin cap, leaving decent lacing. There's been plenty of discussion about the proper glassware enhancing aromas, but damned if every beer doesn't look beautiful in this glass.

The aroma on this is hop-heavy, and far less Belgian-yeasty than I imagined. Floral/grapefruit smells come up first, followed by that familiar Belgian yeast funk. A sweet, tart scent of dried apricots also comes through.

Up front, this immediately tastes like Stone IPA (as denoted/disclaimed on the bottle). Big, clean hop notes burst out front but they're mirrored by a sweet, subtle, and funky Belgian undercurrent. This is kind of like biting into a dried date along with a piece of dried pineapple in trail mix. The bitterness of the hops dominates, but there's a chewy, semi-sweet backbone. The alcohol finally comes through in the finish, pairing nicely with a sticky Belgian linger.

I keep trying "Belgian IPAs", and this one definitely sticks out as the hoppiest in my book. I think my favorite part about drinking this style is comparing the notes from the beers that actual Belgians are making to a beer like this.

Second time around for this one. Pours a golden yellow, slightly orange with a one and a half finger head that leaves light lacing on my pint glass. Head dissipates after a few minutes into a nice creamy coating on the beer, a bit too bubbly though. Smells of hops, piney floral and citrus and a good malt presence in the nose too, the Belgian yeast adds to a good nose in this beer. Tastes of citrus, pine/wood, more hops, some sweetness, belgian yeast and a good malt backbone. Mouthfeel is kind of fizzy for me but is light-medium with a good malt aftertaste coating on the tongue. Drinkability is high here, a fairly light beer, no alcohol taste or other bad tastes, the hops would get tiring if doing a session of this one though, great stuff from Stone once again.

Picked up a 22oz bomber from Olive Tree Market here in OB for $4.99 and poured it into a snifter.

A: Pours a very clean golden/light honey hue with a decent head that dissipates within a couple sips, leaving good lacing from start to finish - there's also a very light effervescence throughout.

S: Fermented apples, grain, sweet belgian yeast, earthy moss and citrus from the hop with a bit of spice in the mix as well.

T: Very similar to the nose, but fortunately the hop is much more aggressive and dominant in the mix (which one would expect from Stone) with flavors of resinous pine and major citrus bight. Very well balanced and a perfect blend of the two styles.

M: Medium-bodied with a perfect amount of carbonation for the style, very clean finish with a lingering bitterness from the hops.

D: Very enjoyable beer - I could definitely knock down another one or two bombers in a sitting.

Enjoyed on tap at Freshcraft in Denver.

Smells of citrus, grass, orange peel, tobacco, honey and mint. On the weak side, presumably due to the lack of a good head.

Tastes like Stone IPA with a twist. Similar hop profile, but a good deal yeastier, bringing out a bready flavor. Honey, orange, and subtle pine notes are present. Delicious

Great MF. Crisp and clean; sessionable. A great, light bodied beer - awesome for summer. Very resinous; sticks to the teeth for quite some time.

A great twist on Stone's famous American IPA. I will most certainly seek this one out again.

Cali-Belgique IPA from Stone Brewing
Beer rating: 89 out of 100 with 3476 ratings