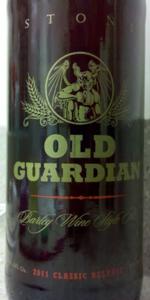 Poured into a Snifter.

A:Candy apple red. With enough light, it embraces the shape of a Candy Apple inside my sniffer glass.

S:If alcohol was a candy it would be a caramel. Melted sublimely into an indefectible liquid that was meant for every labored enthusiast.

O:An experience to be dealt with in a mature manner.

This beer was excellent, the first quality barley wine I ever tried

Thick opaque amber color. Thin head and not much lace. Smell of caramel, honey and hops. Maybe a hint of butterscotch. Sweet forward honey, malt, caramel. Apple/ pineapple toward the middle and delicious hop balance on the finish. Typical well rounded hop character of Stone brews. Mouthfeel is pretty thick and sticky. Fairly low carbonation. Surprisingly clean finish for such a complex taste. Alcohol is present but not overpowering, yet is hot in the belly. Not your every day brew, but very good nonetheless.

It poured a very nice dark copper with ruby highlights. It had little-to-no head but left a ton of lace. The smell and flavor had a great deal of complexity, with a dark fruit sweetness, followed by an earthy, grassy middle, and a salty roasted nut finish. A slightly unpleasant metallic aftertaste lingered. The feel was thick, full, and bitter, with a dry finish and very long-lasting.

Old Guardian has a beautiful dark color and a nice balance of sweet and bitter flavor with an extreme bitter feel and an aftertast that begs for a water chaser.

Very fat thick off white 2 finger head. Color is dark woody burnt orange color. Visually this beer is flawless. Sticky cement lacing. Smell is caramel and sugar with a stinging bitter hop tint. Also picking up a nice sweet plum as well. Overall smell is a tad too sweet for me but it is definitive American Barleywine smell. Very sugary but also very bitter. Taste is initially very woody slick candy sweetness. Earthy and dirty with a sharp bitterness on the end. The taste takes after the smell in the same order. But it isn't overly bitter. I love bitterness as much as anyone but this years Bigfoot was almost too much for me. This seems to be way more balanced than my beloved Bigfoot this year. Carbonation is perhaps a bit too aggressive. It is pretty sharp. Maybe more Pepsi sharp than Coke. Very high alcohol heat on the throat. It is far too warming. Great beer if not for the carbonation and heat. Smell and taste is out of this world though.

A- Hazy orange with light tan 1 finger head. Some lacing that resides immediately.

M- Full body with alcohol very present. Finish is on the dry side.

O- Remembered this as being better. Actually a fairly middle of the row barleywine. Needs some more sweetness and more complexity in flavor and aromas.

22oz bomber. Pours a dark, murky mahogany color with a nice frothy head. Minimal lacing. Aromas of dark fruits, malts, bread, booze and hops. A lot going on here. Taste has that nice warming alcohol zip to it. Malty flavor along with a big amount of dark fruits and a bit of a caramel taste. Bitter aftertaste is where I pick up on some of the hops. Boozey. All things considered this is pretty drinkable. Old Guardian continues to be one of the best barleywines on the market.

pours a lovely ruby, that is somewhat hazy. a finger of even, light almond head with nice retention and minimal spotty lacing.

smell: super fresh. there is a war going on between the hops, malt and alcohol armies. lets say its the year 1969. the malt flavor is the south vietnamese, the hop flavor is the north vietnamese and the alchohol is like america: once a brute force, that is slowly getting defeated and will soon diminish and leave the others to settle it. or is it more like a yummy world war 3 in my mouth?

taste: big fat honking man meat slaps you in the grill with west coast hops. youre getting dp'ed by flavor, you look up, only to be showered in the juices of brewing success!!
but seriously, this blend of light caramel flavored malts, classic west coast citrus hop varieties and subtle alcohol makes my day, and rivals almost all other barleywines i have tried to date.

Poured into a tulip. The color is bright red with some haze. There is a small off-white head.

The aroma is full of caramel, toffee and some hops.

The taste is very bitter, with notes of grapefruit. There is some good caramel flavor as well. This is interesting, the malt is very prominent in the aroma, but the flavor seems more hoppy.

This has a nice medium to full body, with a hefty dose of carbonation.

This is really tasty. I wish I had the patience to age this one.

2011 edition, poured from a bomber into a tulip.

Cloudy burnt umber with a late-arriving one-finger head of medium tan that appears foamy, sticky and dense but disappears rather quickly. Some thick streaks of lace remain. 4

In the nose: caramel, toast, oven-roasted oranges. Nicely citrusy, but balanced by a hefty breadiness. It's pretty rich, with some alcohol and fermenting fruits noticeable. 4

Hmm. I can't taste much except alcohol here. There may be some aged citrus, a hint of caramel and bread but mostly it's booze, almost like orange-peel infused vodka. Caramel sweetness emerges more as it warms, but there's still that undeniable ethanol burn.

Redemption in the mouthfeel. The liquid's nicely velvety, smooth as it moves about. Body between medium and medium-heavy. Very light fizziness. Alcohol is mostly in flavor, as I don't feel it much on the way down. Kind of backwards.

Overall, too much booze in the flavor. I would've liked a little more barley and a little less wine. Hopefully a year in a dark corner will tone down my second bottle.

A: Pours a reddish/copper with a finger+ of head

O: Think arrogant bastard on steroids/alcohol. Okay, maybe it has a lot less hops but it reminded me of arrogant bastard in many ways. The alcohol on this one was not at all hidden. You knew it was 12%.