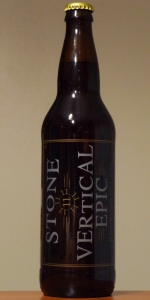 Notes: As with any good epic, herein lies the promise of larger-than-life experiences, heroics and twists & turns as the adventure unfolds. These bottle-conditioned ales are specifically designed to be aged until sometime after December 12th, 2012. Provided you can wait that long. At that time, enjoy them in a "vertical" tasting. Each one unique to it's year of release. Each with its own "twist & turn" in the plotline. Each one released one year, one month and one day from the previous year's edition. To remind you, the remaining dates are: 12.12.12
View: Beers | Place Reviews
Reviews: 485 | Ratings: 1,535 | Log in to view all ratings and sort
Reviews by MaxSpang:

Served in a tulip.

This beer pours a deep red with the slightest amount of haze. There was a khaki head that was around 2 fingers, and it stuck around for a little while. There was a decent amount of lacing. Not much visible carbonation. Overall, it's a decent looking beer.

The first few sniffs reminded me of a bigger Belgian ale - perhaps a Tripel or Quad. There's a nice sweetness to the nose. There is some big dark fruit notes and earthiness as well. The Flanders yeast gives it a Belgian spice character that has nice clove notes and some banana. Surprisingly, I get very little (if any) of the Cinnamon and Anaheim chilli.

The taste matches the nose fairly closely. There is a definite Belgian yeast ester flavor, giving it notes of clove, banana, and black pepper. Big dark fruit flavors come out as it warms. After awhile, the chillies make their first appearance. It's very subtle, just giving it the tiniest bit of warmth. Alcohol is present, but not in a huge way. There is a fruity sweetness that only intensifies as it warms. Like the nose, I don't find any cinnamon at all.

The beer starts off with a decent body, then has a dry finish. The chilli makes the dryness a bit more pronounced. The carbonation is minimal. There is a good amount of warmth from this beer, which comes from both the alcohol and the chilli.

This is an interesting beer. It's sort of like a wacky Belgian-style beer... Well, that's exactly what it is, actually. It doesn't really taste like any other beer I've had, but it's also not that unfamiar. I have no idea how it will age, but I can't wait to find out!

Poured into a Chimay Chalice at cellar temp 55F

As always, my first review of the new year. Opened New Years and poured into a Stone VE glass.

Mouthfeel lingers with a hoppy coat.
Overall a drinkable chili beer, a first for me.

22 oz bottle, aged over 5 years in a dedicated beer cooler.

Appearance: Pours a deep ruby-copper color with a modest size, bone colored head that is semi-durable and leaves only a few spots of lacing.

Aroma: Moderately strong with Fruity with hints of white wine and green apples.

Flavor: Dark dried fruits and bready malts with toffee, caramel, a hint of cinnamon and faint pepper. Very light heat, probably as much from the alcohol as the chilies. Moderately sweet: the level of sweetness works well with the other flavors. High complexity with excellent harmony and good balance.

Overall- A very good Belgian style ale. Lightly spicy and fruity, with a solid malt base that blends nicely with sweet notes of caramel and brown sugar. The high ABV [9.4%] is well hidden excepting some internal warming.

This review was written about a bottle that was aged over a year. I aged it because the new bottles were somewhat overwhelming.

Poured from a bomber into a tulip. Super dark orange/ golden brown with little head and no retention or lacing.

The aged smell is more subdued than the new smell. Still bubblegum,cinnamon, and chile but not near as pronounced based on my recollection.

Mouthfeel is okay. Good carbonation and as usual it smoothes out as it warms.

Overall a good beer and super different. I'm glad I aged it as it did mellow with time. The new version was pretty close to over the top.

the smell is bold and fruity. you can also detect the cinnamon. it seems to be the perfect time of year for this beer right around the holidays.

the taste is unique there is traces of the chilies, maybe even slight heat. and you can taste the alcohol. there is a lot of sweetness here-its also dry, reminds me of a red wine.

over all i like it, i like when breweries reach out and try different combos, makes for unique drinks. i look forward to the 12.12.12 next week.

Poured into a goblet

S: Strong smell of the chiles but also has the smell of olive juice ready for a martini with a small hint of smoke.

T: You really can taste the peppers mixed with smoke while the aftertaste leaves a nice fruity but smoky/hoppy taste in the back of my mouth. The cinnamon really comes out towards the end and is quite pleasant.

M: Lightly carbonated makes it very creamy in the mouth and it goes down smooth.

O: Their seems to be just an imbalance because there are some things i like about this on how smooth it is for being 9.4% the taste is great when i taste the fruitful parts and the cinnamon afterwards. But the lasting smoke flavor is quite off putting while i am drinking it.

A: Cherry red with a thin off-white/creme colored head.

T: Very spicy due to the adjuncts. Good level of sweetness to balance this one out.

O: My favorite of the series. The spice and malt are integrated together to make for an enjoyable sipper.

Showed up at my local last week, not as bad as I was thinking considering the cinnamon and Anaheim chilies additions. Not very pale, more of a deep russet ruby like color going on with tan head forming thick, body slightly clouded with minimal yeast suspension floating. Head forms nice full intricate layered lacing levels. Really nice beer poured into my Stone RIS chalice that has somehow survived almost ten years of beer drinking. The cap reads a malt advocate magazine quote..."Stone Brewing defines the American craft brewing spirit", I'll agree with this since they have been one of the early trendsetters and continue to release things that break trends like their West Coast mild. I'm amazed that the Anaheim chilies don't flame me out either in my nares or the palate. Aroma has a great spectrum of fruit layers (apple/raisins) heavily ripened with natural sugars, like an earthy dubbel glazed with cinnamon spice and a full peppery finish. The first sip provides a wave of juicy caramelized malts and ripened fruit (prunes/dates/cherry)...with some spicy/hatch chilie pepper/spicy cinnamon stick ground bitterness in the finish. Not much heat as I mention spicy it really is well blended and doesn't kill the palate. A bit of astringency creeps in as a nutty/earthiness possibly from the yeast or the pepper seeds that really sets the smooth malt ride off it's path of glory. Complex interesting ale with sturdy smooth creamy carbonation and medium bodied ale with enough texture and dry finish to make it approachable with each sip. Overall Stone continues to make a more balanced chilie beer than I've tasted thus far, that's comparing a handful of experiences from Left Hand, Wynkoop, Rogue, Crazy Ed, and Great divide.