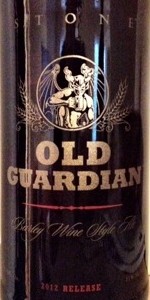 From notes 3/13/13: Pours hazy brownish amber producing a single finger of dense, lasting, beige head that yields little lacing. Aroma is of dark, strong malts, caramel and toffee, dark tea, grapefruit pith, orange, alcohol booze and something a little dark grape-like. The taste is fronted by strong malt, sweet caramel and toffee with some dark fruits; grapefruit, a lingering leafy dark tea bitterness and alcohol warmth/spice. Aftertaste is caramel sweetness and bitter dark tea. Mouthfeel is medium to heavy bodied, carbonation is on the high side of moderate.

Now this is the kind of American Style barley wine that I like. There is some initial bitterness followed by a strong slightly sweet wash, but the bitterness lingers on the back of the throat, but is somehow soft instead of powerful. Delicious.

Mouth is close to full, finish is bitter/sweet/bitter

Overall, nice sipper in front of a roaring fire on a cold winter's night .Only thing that ruined it was the freakin' patriots winning :(

$ 9.53 (Including tax)/capped 22 oz bottle ($ 0.433/oz) from Oppermann’s, Saginaw, MI.
Yellow ink-stamped on the shoulder “Bottled On 02/07/15”, cellared for three years, then stored at 42 degrees and served at 60 degrees in a hand-washed and hand-dried Jester King snifter.
Appearance – 3.
Body – Amber, opaque. When held to the light, amber and hazy.
Head – Upon removing the cap, a tube of yellow-tan foam slowly worms from the neck and falls over the side. When poured into the glass, the head is average (Maximum three cm, controlled center pour), yellow-tan, medium density, short retention time, rapidly diminishing to a one to three mm ring and a thin island.
Lacing – Poor. There is a single segment of tiny bubbles in the shape of an ax.
First pour – Medium amber, hazy.
Aroma – 4.25 – Initially, a burst of malt and lemon. The lemon rapidly fades leaving malt and a bit of caramel.
Flavor – 2.75 - Begins with a taste best described as “medicinal”, slightly bitter, and coating the oral cavity. Subsequent swallows seem less medicinal and blander. The medicinal coating is still present. The malt, caramel, and lemon from the nose are conspicuously absent. No alcohol, no diacetyl, no dimethylsulfide.
Palate – 3 - Medium, average, lively carbonation.
Impression and summation – 2.75 – The best thing about this brew is its aroma – the lemon was entirely unexpected but still worked very well with the malt aroma. Appearance was average at best. The “flavor” was unbearable, suggesting contamination and production of fusel alcohols. The palate would seem to bear this out, since it is thin and over-carbonated. Checking back in my notes from a previous encounter, I see had this rated as a solid “mehh” back in 2009. This time it would rate a “mehh minus”.

T: hard-clipped medium-dark caramel, dark cookie malt note... spicy-fruity finish with a touch of pithy bitterness, reminding me of one of those Sanpellegrino flavored seltzers... heavy grapefruit essence builds on palate with each sip... even at this age, the hops still maintain a slight edge in prominence over the malt

F: round about medium-bodied with a subtle jet fuel heat cutting through a bit and pushing it along, but a finely-shredded, frayed expanse of hop oils and malt sugars lend a light silty, fuzzy, static texture throughout, eliminating any definition or contour... keeping with the flavor theme, this does feel like a barleywine with some unfiltered grapefruit juice blended in

O: bought this a few months back at a distributor in South Philly that anecdotally doesn't go to great lengths to establish balance in temperature control throughout the seasons - the look and taste of this bottle does indicate a rough life... in spite of that, its core flavors haven't come close to suffering total devastation, though if one were to buy a bottle of this age with its history, don't expect greatness - maybe pair it up with overpowering foods, or use it as an ingredient in cooking

Pours a nice amber/tawny port in color with a thin head. Nice lacing after head breaks.

Smell is typical of an American barleywine and of Stone...Strong hops up front, and then the malts come in to provide a sweet balance.

Taste, unfortunately, is very medicinal. This taste overpowers the hops and malts, which still have presence, but are mostly buried by that cough syrup dominance.

Feel is actually decent considering the taste, it is medium/full with a nice smooth creamy texture. ABV is present, but not too much.

This one was a bust for me, but I think this is the exception rather than the rule. I would love to try this again, and see if it was just that this bottle was off.

2013 bottle. Pours a ruddy brown, thicky foamy head with good retention. Aroma is wet fig, leather, piney hops - a tad fusel. Gives off a cough syrup vibe - very medicinal, the hops are super piney (even with four years on the bottle), deep caramel, sweet fig, tannin, fusel. Bit of a mess, though I am partial to English style so maybe it is just the deluge of hops turning me off. Mouthfeel is super thick and sticky.

Pours a murky red-brown with two fingers of khaki head. Head retention is tight and lasts a good amount of time, with good lacing left behind. Aroma is molasses, caramel, toast, and pine hops. Flavor profile is pine, resin, and herbal hops balanced with caramel, molasses notes. Toasted and nutted malts form a firm foundation. Mouth feel is medium in thickness with a smooth, creamy texture. Overall, a bold beer with a bite of hops supported on a sturdy malt foundation.

A - Pours a hazy dark amber with a one finger off white creamy head. Nice amount of soapy lacing.

I love me some barley wine brews and this did not disappoint...

Picked this up in my local craft beer store, a tad bit dusty and with "2015" stamped on it. I snatched it 'cause it had been aging for two-year - good enough for me. And boy, did it age well. The beer poured a copper-ish color with caramel hightlights, little to no head and definitely no lacing. The smell was a sweet and tangy mixture of the barley wine and malts that lead me to a mouthfeel that was so creamy and smooth. If it weren't for the almost 12% ABV, I might have pounded this sucker. Anyway, the taste was boozy but I prefer something a tad more balanced when it comes to these. Don't get me wrong, I like the booze, but I do want to enjoy something more than its brute force capability. Nonetheless, this is definitely a good beer, and I'm glad I shelled out the bucks for the 16 oz. bottle.

Totally solid effort, have let warm as the bottle goes down, and it drinks just as well chilled as warm-ish. Lots of malt and molasses on nose, and quite sweet palate wise, but not overbearing. Orange undertones, hint stonefruit.
2016 so a year old, has mellowed, not too hoppy, but not too smooth either.

Poured into a snifter, the appearance was a soft dark muddy brown color with an eggshell white foamy finger’s worth of head. Solid sticky stringy lace. The aroma had some dark fruits, sweet apples, caramel and toffee malts closes with a light tobacco quality. Grassy hops. The flavor balances between a strong semi-malty sweetness to the dark and apple fruits. Nicely blended aftertaste. Dry semi-smooth sweet finish. On the palate, this one sat about a medium on the body with a solid sipping quality about it. Fairly dry, hop bitterness hits appropriately. Carbonation seems to have died off a bit. ABV still feels on par. Overall, very nicely done American styled barleywine that I would love to have again.

Dark brown with ruddy hues. Has a fluffy tan froth that sits a bit. Redolent with brown sugar, caramel, cherry, plum and piney hops. Has a tasty mix of sweet (caramel, dark fruits, gum) and bitter (pine, faint resin) on the tongue. Medium in body with a pinch of spicy alcohol in the finish.

And old classic and the real deal.