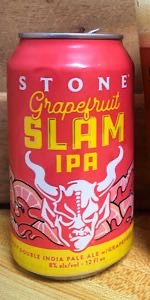 First Release: February 2014
India pale ales harness the inherent flavor characteristics of hops to bring forward familiar flavors of pine, resin, spice, and citrus. In some cases, those botanicals are so potent, they exactly mirror specific edibles. Such is the case with Centennial hops, which hail from the Great Northwest and come across on the palate like a mouthful of citrus fruit. That sensation is amplified with this, the first beer introduced via the Stochasticity Project–a double IPA brewed with Centennial, Chinook and Magnum hops as well as an immense dosing of fresh grapefruit peel. The result is over-the-top bittersweet grapefruit intensity that is at once refreshing and bracing in its citrusy bitterness.

L - Hazy golden with a thick off-white head that dissipates somewhat quickly leaving behind a lot of lacing - some particulate likely from the grapefruit peel
S - Bright citrus and piney hops with a hint of malt
T - Follows the nose: bright citrus (grapefruit) and piney hops up front and throughout tied together with a malt backbone - maybe some caramel in there.
F - Medium to full bodied with a moderate amount of carbonation. Personally, I wish the body were a little lighter and more crisp, but overall it's still not a bad mouthfeel
O - This is a really nice IPA, but it really doesn't stand out for me. The grapefruit is nice, but personally I'd take a Ballast Point Grapefruit Sculpin over this - this one needs a little more crispness on the body and a little more hop bite.

Pours a cloudy amber/gold with decent head and excellent lacing.

The aroma features a solid malt backbone, with the expected citrus hop note present. More pith than meat of the fruit actually. Hints of floral aroma as well, but not much else. Rather subdued overall, without much complexity.

The aroma was subdued. The flavor is classic blunt Stone, which is appreciated, but not the best the brewer has offered. A bit heavy-handed on the bitterness, but the malt is still there to balance, in true Stone fashion. Like the nose, the flavor has more pith than flesh of the grapefruit, which skews a bit more bitter than necessary. The ABV, however, is well hidden.

The mouthfeel is solid and straight. Well carbonated, with a good crisp finish, especially for a DIPA.

Overall, I understand this is a "grapefruit" flavored DIPA. But the promise of "peel" was a bit off. This has more of a "pith" bitterness, which is fine, but not exceptional. Still, glad to have tried.

O: I have high expectations for Stone so this was kind of a letdown for me. It delivers what's promised... but it's not nearly as rounded a flavor as I'd hoped for. The grapefruit peel overwhelms the hops too much and I didn't enjoy it as much as expected. It's still a solid beer... but not one I'd seek out again. Hides the ABV well and very drinkable.

A: crystal clear; deep gold in color; 2 finger off white head that receded to a wispy cap; very nice lacing;

T: floral with a hint of grapefruit from start to finish; moderate bitterness at the end;

O: I expected more grapefruit in the flavor;

Poured from the bottle into a La Fin Du Mode stemmed glass.

The color is a clear yellow/gold with two fingers of foamy white head and some nice lacing left on the glass.

The smell is filled with grapefruit aroma and has a real juicy fruit flavor. The hops seem to be right down the center and pops several times. There is a nice lemongrass aroma that makes the mouth water for a taste.

The taste of this beer is giving the grapefruit flavor that was promised by the name. The bitterness hangs over this beer like a canopy with some touches of earthy grass flavor mixed in a grainy center. The bitterness comes back towards the end to slow down things like a speed bump.

The feel of this beer is medium bodied with a nice drinkable, refreshing feel. A great I PA that brings the flavor and is quite enjoyable.

Tried on tap at Magic Tree in Boardman Ohio. WOW! Punch in the face hoppy grapefruit aroma, followed by incredible grapefruit citrusy flavor. They nailed this one! Had at least 3 of these during my meal. Could've had a couple more, but had to work the next morning. Nice light-med golden color, very smooth going down, a very well made dipa. I was worried at first that the grapefruit zest might be too overpowering, but they balanced it perfectly to accent the hop profile.
If you like cascade, centennial, and citra, you'll absolutely love this! Quite possibly placed in the top 5 of my favorite beers, definitely in the top 10.

appearance: Golden with some yeast floating around from the ride home

taste: great flavors of grapefruit with some pine at the end

O: Glad i picked this up. was disappointed the store ran out of Enjoy By but this made up for it. will buy again if i see it.

Poured from a 22oz bottle (Bottled On: 2/06/14) into a 12oz, Saxo branded, large mouthed, stemmed tulip. Although the artwork might seem random, it is quite amazing. Step back a few feet and you will see the gargoyle art in the chaotic lines of the 62,560 pixels used.

A- A conservative pour reveals a gorgeous, crystal clear, deep orange/copper hued beer with 1-finger's worth of a white, frothy head. Despite the non-nucleated glassware, a few conservative streams of carbonation emanate from the bowels of the glass. (4.75)

S- The grapefruit adjunct was immediately detectable...but hit my nose as being closer to a white grapefruit 'flesh' as opposed to the advertised 'rind' component from the fruit. After the initial sip and allowing the senses a moment to adjust, the intense grapefruit aromas fade rather quickly in favor of those familiar resinous, black tea-like aromas that is nothing but classic Ruination. Hints of other citrus and tropical notes (lemon/lime, peach, honeydew melon) from the Centennial dry hopping reveal themselves, but never dominate...the grapefruit is the steals the show with this offering. (5.0)

T- Grapefruit, grapefruit and more...yep, grapefruit. The palate is consumed with that very citrus fruit across the entire palate and its bitterness lingers well after the sip. As it warms, some of the other flavors as detected on the nose come to the party, but never dominate. However, I feel that the grapefruit 'peel' addition mellows the intense piney qualities found in standard Ruination. Despite 8.2% ABV, the malt stays well at bay, masking the alcohol completely. (5.0)

M- Stone's beers are never overcarbonated and always tend to weigh in on the more conservative side (IMO, 2.50 - 2.55 vols for all you brewers) and is no different here. Carbonation is on the softer side of medium and just enough to get the job done. Like its cousin, Ruination, the body of this beer ranks on the lighter side of medium. Hefty enough to support the generous hopping...no more and no less. (4.75)

O- A really nice variation and surprising improvement to an already proven (and recently amended), world-class offering. Although I have yet to perform a side-by-side comparison, I think I prefer this a bit more than Ruination. The addition of Grapefruit peel/flesh helps bolster the citrusy character from the Centennial dry hop as well as tone down the piney (i.e. 'dank') component from the Columbus...the result is a more balanced, yet just as pungent (aromatic and flavor) offering. However, due to the increased price for this 'special release,' I will be more than content sticking with Ruination (5.0)

Had on tap at O'Niell's Pub in Albuquerque, New Mexico.

S- citrusy and floral with a sweet malt backbone

T- It has a definite grapefruit taste, particularly the taste of the peel. There's also some sweet malt, and citrusy and floral hops working in concert.

M- Sweet and malty initially, the bitter from both the hops and what I assume is the grapefruit which provides a sensation like biting into that fruit. The beer has a medium body with mild carbonation.

I like the citrusy characger of this beer, but I also feel that the grapefruit peel deal is a bit overbearing and doesn't quite appeal to me. If not for that aspect, this would be a shining example of a DIPA.

O: This one didnt do it for me. Felt the balance was way off and not in a good way.

A- Dark yellow/light orange with a long lasting head that leaves behind plenty of lacing.

T- Sweet floral and grassy upfront which transitions into citrus and pine. WOW! It finishes as if you bit into a sour grapefruit. It leaves a very citric sour bitterness on the tongue that lingers for minutes.

O- Overall, pretty good. You don't vet very much grapefruit flavor, but you get a major citric bitterness finish. I percieve it to be one of the most bitter beers I've ever had.