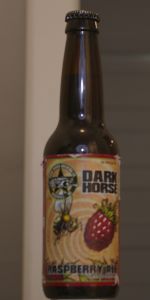 Notes: This beer is a light bodied, easy drinking ale. We use real raspberries late in fermentation, giving this beer a mild fruit flavor while keeping a very balanced malt profile. This may not be what some would expect from a "fruit" beer, but our brewers make good beer; not fruity, carbonated malt beverages. Our motto is, "beer first, fruit second".
View: More Beers | Place Reviews
Recent ratings and reviews. | Log in to view more ratings + sorting options.

The aroma had a solid raspberry burst at the front of the nose, with just a light bit of grain in the background. Pretty much the same on the tongue; a light malt base, with the berries coating all of the palate, and lingering on the finish.

The body was light medium, mostly smooth (some coarseness from the tartness of the berries), and had a medium finish that dried out after a moment. Drinkability was very good, I could see this being a nice summer quaff. Overall, a nice enough brew. Worth a shot if you see it.

Rated by Jule17 from Ohio

Rated by jkh15 from Michigan

Smell: Raspberry mostly. Not getting much else.

Taste: A bit of raspberry tartness up front, along with some bready malt, and berry, raspberry flavors at the finish. Tart/lightly bitter finish.

Mouthfeel: Well carbonated - not fizzy, but brisk. Scrubs the palate clean. A bit of a dry finish, but some stickiness on the teeth. A little thin under the carbonation.

Overall / Drinkability: Definitely a beer that is true to its label - it's a raspberry ale. It's not trying to be anything else but that. Okay - not an amazing beer from a depth of flavor, but tasty enough. Seems like it would be good to have with the right dessert. Pairs okay with a chocolate brownie - and I think it would work with other desserts as well. Pretty well crafted for what it is. I did only want one though - one 12oz bottle with a dessert is sufficient.

T/F: Just like it smells. Raspberry and some fruit sweetness up front. After that it's cereal grains/wheat.. no real tartness. A little bit of caramel. Light bodied and well carbonated.

Notes via stream of consciousness: Hazy orange body with golden highlights near the base of the glass. Short-lived frothy then creamy off-white head. Wow, this must be an old bottle, there's only a hint of raspberry in the aroma. There's malt beyond that. The flavor follows. It's fruity, but not that fruity. It is clearly raspberry though. Caramelish malt. There's some bitterness to it, so this really is an "ale with raspberries added". That's alright by me. Still, I think I'd rather just have a regular ale, I'm not sure how much the raspberry is helping here (ha ha, it came out pretty strong in the burp!), and it might be hindering it - no way to know that though. Medium-light in body and crisp. Overall it's decent but nothing great.

3.58/5  rDev +6.5%
look: 3.75 | smell: 3.75 | taste: 3.5 | feel: 3.5 | overall: 3.5
This was poured into a pint glass. The appearance was a hazy golden orange color with a quickly dissipating head with some stringy lacing clinging and then spider webs nicely. The smell was mainly sweet to bitter, slightly sour raspberry. A light sweet fresh grassiness entered in as it warmed. Light sweet caramel malts came in. The taste was sweet raspberry and fresh grassy bittersweetness rolling into a sweet sticky raspberry aftertaste and semi-wet finish. On the palate, this one sat about a medium on the body with a fairly decent sessionability about it. Carbonated lightly and nicely. Overall, I say this was a pretty good raspberry ale that I would have again.
Jul 04, 2017
Rated: 4 by Commandophile from Illinois