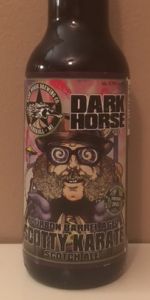 Disappointing, if I'm quite honest. Subdued but pleasant and well-balanced aromas suited to the style, but very little barrel character, neither on the nose nor the tongue. Even quite thin on the mouthfeel, given the expectations as a barrel-aged scotch ale. Not sure this is any improvement on the original.

Smell - The bourbon comes through in the nose,eliminating the base beer.

Taste - Bourbon comes through in the initial. As it warms, I detect the base beer. Notes of toffee, caramel, oak, and a hint of vanilla are present. The aftertaste sees the bourbon souring a little, and becoming slightly warm.

Mouthfeel - It is obviously not a stout, but this seems thin.

Overall - I would think such a release would be on par with bbpt5. That's just not the case.

A 4-pack ran me $20.99 in Brooklyn. 12ish fl oz brown glass bottle has awesome label art with a purple motif, as well as a branded pry-off crown cap. It's nice to see a bourbon barrel aged 10ish % ABV brew in a smaller format bottle instead of the cash-grab bomber format (I'm looking at you, The Bruery).

HEAD: Maybe 4cm worth of foam in my nonic. Classic off-white colour. Nice frothy creamy consistency. Good complexion. Retention is superb for the high ABV - easily ~8+ minutes. No lacing as she recedes.

BODY: Dark brown. Not the most robust hue. Nontransparent. Translucent. I see no yeast or sediment. Hard to say if it's filtered or not based on the appearance; I'd wager it is (it's not murky or cloudy anyway).

Appears well-carbonated. It's a pretty typical overall look for a Scotch ale, bourbon barrel aged or not. I'm optimistic.

AROMA: I definitely get the natural vanilla from the bourbon-soaked oak wood, along with aromatic notes of barrel sugars and a hint of char. All the classic Scotch ale notes are there too from the base, never getting overwhelmed by the bourbon: chewy toffee, caramel, almost a hint of tea, thick caramelized malts, ample residual sugars...it's nailing the style down pat. I think I get some marshmallow too. A hint of sugarcane. Raisin, perhaps. Sweetness is high, to style. No real hop presence, also to style. No yeast presence - not even any esters.

What impresses me about this is how even-keeled the balance of the barrel and base notes seems to be. No, it isn't as aromatically impressive as a style paragon like Founders' Backwoods Bastard, but I'm really hoping the taste delivers on the promises of this aroma, because this suggests a balanced yet robust Scotch ale with plenty of deep flavours.

TASTE & TEXTURE: Softness in the mouthfeel accents the vanilla from the bourbon gorgeously, and accentuates the marshmallow as well. Marshmallow comes to mind also given how gooey the brew is. It's thick to style, but not too chewy or sticky. Toffee from the base gives this wonderful Scottish flair, joined by the requisite caramelized sugars and residual sugar sweetness the style is known for. A hint of candied fig is all I can pick out from its vague candied fruit profile.

I don't get much oak at all, and the bourbon character does lack much beyond the vanilla...some char or toasted coconut would be a welcome addition. Thankfully, there's no booze from the bourbon either, and I find myself appalled this is close to 10% ABV...it doesn't show it at all.

Full-bodied, with a moderately heavy weight on the palate. But it's smooth and wet enough to be approachable. Obviously, it's not refreshing. There's not quite an ideal harmony of texture and taste here (I think it could skew a bit more dry and coarse) but the abovementioned interplay between the softness of the mouthfeel and the vanilla note is impressive, and might be the highlight of the build for me. Balanced in terms of the cohesive base itself and the base vs. the barrel - which is a rarity these days in a Scotch ale. More of a leathery feel and a fuller body would help give this more oomph.

OVERALL: Swinging for the stands, Bourbon Barrel Aged Scotty Karate manages to play in the same ball park as superior paragons of the style like Founders Backwoods Bastard without surpassing them. With more time in barrels (and barrels from a more suitable bourbon), this could easily be a world class example of the style. At it is, it's a highly drinkable Scotch ale even at its high ABV, and I'd say it's worth the $5.25 a bottle every once and then. Dark Horse again delivers, and shows they're one of the best in Michigan when it comes to bourbon barrel aging.

Would pair well with a nice cigar or a peated pure pot still whiskey.

$18 for a 4 pack? I’ll take Backwoods Bastard anyday. Very thin tasting. Not a lotta balls to this one. Smell was very good, but I did drink this too and it tasted weak. BB is much better. Just my opinion of course.

I honestly prefer the regular Scotty karate over this. Barrel aging was good for smell but I felt it killed the mouthfeel and carbonation. Not as sweet as the regular. I felt disappointed especially since there was an $11 difference in price over standard Scotty. I've had way better.

A - Pours a murky dark reddish brown with a one finger off white head. Light amount of soapy lacing.

T - The taste follows the aroma. Vanilla, butterscotch and caramel upfront with the bourbon appearing in the finish. The finish has some light boozy heat.

O - I still prefer the original Scotty Karate. The barrel adds a touch of sweetness and booze but not much else. Still enjoyable nonetheless.