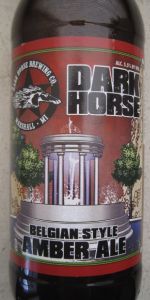 While the malt and hops give this beer an amazing copper color, medium body, and a smooth mouth feel; it’s the yeast that sets this one apart from other amber ales. Inspired by Belgium's beer, women and mussels we thought it would be cool to give our Amber a little Belgian touch. We accomplish this by using an "almost Belgian" yeast strain producing similar esters and flavors commonly found in more traditional Belgian beers.

A - This one pours reddish amber/bronze with a small khaki head that quickly fades to a thin layer of fizz. Swirling produces some spotty lace, but fails to bring up a decent head. I really like the dusky and hazy color though.

S - This has a fruity and vegetable combo aroma, like V8 splash. I'm getting some musty earthy moist soil and also some grassy hop notes. This smells a bit chalky and old world, and I'm all about funky notes like these, but they somehow fail to deliver here.

T - Carrot juice with strawberries and peaches. There is a mushroomy dirty flavor too, a long with a biscuity malt aspect that wasn't present in the aroma. A peppery spicy flavor is very prevalent also, like pepper in a Bloody Mary.

M - Gritty, earthy, dirty, medium in body, and dry on the finish. A really solid mouthfeel for an amber ale!

D - Not too shabby. I like the oddball earthy notes, and the tight mouthfeel aides drinkability. This is a pretty good brew, even though it doesn't look all that great.

Poured from a 12oz brown bottle into a snifter.

Color is a hazy amber, glowing copper when held to light. 1 finger creamy white head. Leaving a thin layer of retention and spotty bubbles.
Any lace quickly slides back down into the beer.

Aroma is a burnt pine, some grassy hops, sawdust, resiny hops. Bitter in aroma, no sweetness detected at the nose.

Moderate carbonation up front, sweet malty flavors. Orange peel and a large overhwlming amount of ginger. Not a fan of this.
Mouthfeel is thin and watery. The bitter burnt pine wood flavors and more then generous amounts of ginger are enough to turn me off from buying this again.

Will skip in the future.

A - Pours a hazy amber color with very little head and carbonation.

S - I get hops, pepper and spices, I don't get much malts at all. Smells very different than any Amber I have had but still smells good.

T - I get some of the spices and hops but tastes very watered down, really disappointing.

D - This is just bad beer, I have been disappointed with most of the Dark Horse beers I've had and this is no exception. This might be the worst of the bunch.

Poured a thick orange brown color. Nose is fruity and sweet but soured. Taste is medium bodied, fuity, astringent and sour. Mouthfeel is full but harsh. Nothing about this is drinkable in my eyes.Maybe I got a bad batch or a bad bottle. Who knows. I would try another one.

A: 1 finger of head with a dark amber color; the foam clings to the glass and it has good head retention.

S: Smells clovy with a sort of tart cider aroma - reminds me of a draft cider.

T: Cider taste with little to no hops; this beer tastes artificial on the finish and is very mild. Pear-like taste of a witbier is also unfortunately pleasant. This mixture doesn't work well and tastes bad.

M: Semi-smooth, but not great.

This is the only Dark Horse beer I've had that I didn't like; it is the worst amber ale I've had unfortunately. Just buy Lucky 13 from Lagunitas instead.

One of the worst ambers I've ever had maybe it was just served improperly but it tasted like a Belgian triple that had been left out in the sun for about a month and than scuttled back into a keg so I could suffer. Even for a Belgian this beer is lacking the fact that it stradles between both Belgian and ambers and is astonishingly underwhelming on both fronts is even more dissapointing. I'm ashamed for Dark Horse that they even claim this awful bag of dicks.

I very much did not like this beer. It was a hazy reddish copper with next to no head. Sweet smell with notes of bubblegum (yech!)

First tangy esthery note with a bit of yeast coming in along with some crystal sweetness and more bubblegum. Hops ride along the top of this beer popping their head in before the yeast and after the bubblegum. Not what I exected, but now I know that this is brewed with a belgian yeast strain. Doesn't help knowing that, this didn't taste good to me, the combination of the tangy esthers and bubblegum did not work well IMO!

Moderate to light body with almost no carbonation. Yuck.

Pretty and not quite textbook malt-centric American Amber here... color is clear rust red, unfiltered, decent head, some lace, etc, etc... nose a bit more estery than I'd like, but sports nice malt-front caramel and toasted sugars. Hits of chocolate and roasty grain. Flavor follows suit, well balanced, full and a little grainy. Little buttery and hoppy-sour in the finish with a touch of fruit sweetness. Easy and full in the mouth, excellent carbonation levels mean you hit hit this hard.

A decent, if a little weird, example of the style that is more earthy, estery, and malt focused than its West Coast brethren.
Not bad at all.

The scent was thin as well but there was a nice grain, burnt malt aroma that made it worth sniffing for a while.

The taste was so unusual for an amber that it made it interesting at every every sip. I immediately caught licorice and then a little clove. Grain and malt with some Smokey char appeared but then clove took over again. Not a clove fan but it synced well with the light malt flavor. The feel was nice and smooth.

Overall, this was quite an experience, different, unexpected and unique but not quite the amber experience I wanted.

Served from a 12 oz bottle into a pint glass.

Smell: Sweet Malt and slight hops. Maybe some citrus and a little bit of bread.

Taste: Starts of with a citrus flavor and hop bite and then ends with a sweet malt and bread flavor. The hop flavor does not stay around long and is not overpowering at all.

Drinkability: Very drinkable. The beer as a great flavor and not much of a lingering after taste. This would be a great session beer.

Not so much pumpkin as pumpkin pie filling; it isn't a pure orange-amber but is actually a toasty, rather murky tone made so by shades belonging to the likes of brown sugar and cinnamon. All these muddying hues turn its clarity clammy at best. Head is wholly non-existent, even its trim seems to have precipitated.

Dark Horse curiously lists this yeast as being an "almost" Belgian strain which implies not quite; I'll have to assume it isn't even though the spicy clove-like phenols and banana-fronted esters heavily imply that it is. If I didn't know any better the names "Chimay" and "Ommegang" would have instantly popped into mind.

Like its aroma, the beer's flavour is confident and forward... not entirely with good reason. Specifics include: a few shakes of cinnamon, a whole evergreen worth of clove, a dash of pepper, a splash of lemon juice and a slurry of decomposing apples and bananas. This is spicy and only adequately malty with virtually no trace of toffee, caramel or budding hop cones that is expected of most American-made amber ales.

Of course, it's obvious this isn't anything like most amber ales - which is something, in fairness, the brewery makes clear. And it's easy to see exactly what they were going for: an abbey-style Belgian ale. What isn't exactly clear to me is why they haven't tweaked the recipe some; the beer is overly aggressive with a considerably watery flavour. More malt is desperately needed, or at least something to scale back the that yeast.

It is intensely peppery and leaves you in the clutches of forceful zestiness, one that fervidly gnaws away at your palate. Halfway through the bottle my palate feels exhausted while my gullet yearns for more beer, albeit of a different variety. The aftertaste it leaves is ardently biting with an almost sour note. I need something else to drink now.

Yes, Belgian ales have characterful yeasts that brim with spice and nuance. They also, however, have poise and elegance and drink with a kind of refinement unmatched by the beers of other nations. I think Dark Horse missed that last point when formulating this beer. My personal opinion is this brewery should never mind imitating the tradition of others and stick to what they do best: making insolent, defiant ales the American way.

A: The beer is a cloudy light gold color, with a thin off-white head that fades very quickly and leaves a thin lace on the glass.

S: The aroma contains caramelized malts, fruit and some hops.

T: The taste starts out sweet with flavors of fruit and caramel. Then some breadiness comes in from a hearty malt character. The hops presence is mild but complementary and brings some balance. The after-taste is slightly sweet.

O: A little tasty, goes down ok, not too filling, mild kick, decent representation of style, there are certainly a lot of other choices in the style that I would pick first.

A decent Belgian Pale Ale, although a tad subdued for my tastes. Makes for a decent session beer if youre looking for Belgian flavor without a lot of alcohol or damage to your wallet.

pours a cloudy reddish copper color with a 1 finger head, has a nice color to it. smell is kinda weak, it has some good aroma to it, it is just too weak to get alot out of it. it has a nice biscuit malt aroma to it though. taste is good has a roasted malt flavor overall, sorta watery which is why the mouthfeel is kinda low, slightly above average amber ale

A-Pours a slightly hazy copper amber with LOTS of carbonation, leaving a thin white head but no lacing.

S-Sweet caramel malt and a whiff of citrus hops. Good for the style.

T-And so is the taste. Quite sweet throughout, maybe a bit too much so but I am grateful to have lots of taste. A bit of hoppy bitterness in the finish but not much of it.

M-Light bodied and crisp, despite the high carbonation.

D-Darn sessionable. Tasty and delicious. A big, pleasant surprise as this style is not a favorite.