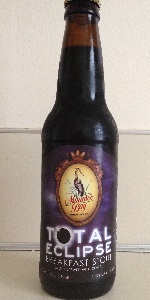 Notes: Maumee Bay Brewing Company’s Total Eclipse Breakfast Stout is a hearty meal in a glass. As it pours, it devours the light and your glass is filled with darkness. This massive beer brewed with espresso beans (from Flying Rhino in Toledo, OH), oatmeal, and lactose offers a rich and complex taste that begs to be savored. With a smooth carbonation and luscious roasted malt flavor, you will fade to black as you slowly sip this finely crafted brew. We recommend serving at 45-50 degrees in your favorite snifter. It’s nothing but total bliss from Maumee Bay Brewing Co.
View: Beers | Place Reviews
Reviews: 75 | Ratings: 416 | Log in to view all ratings and sort
Reviews by UrbanCaveman:

Smell: Coffee. Coffee not unlike the standard breakfast diner Arabica blend. There isn't much else to the aroma, beyond a thin sort of burnt-bitter grain smell, and perhaps a vague tinge of blackstrap.

Taste: Coffee. Coffee not unlike the standard breakfast diner Arabica blend. That's how the flavor profile opens, proceeds, and closes. A handful of other flavors pop their heads through the flavor profile door while it's open, making little cameos - blackened wheat, faint molasses, very mild chocolate, something vaguely resembling a tinge of berry - but for the most part, this is like drinking chilled Arabica coffee.

Mouthfeel: Thick and full bodied, with carbonation just this side of flat. Oddly enough, has a somewhat watery breakdown at the very end of the swallow, despite the fullness throughout the rest of the process.

Overall: While not bad, in fact rather solid, this is not a spectacular example of a breakfast stout. Coffee lovers may find it wonderful. I find it to be right around par for a stout, particularly of the double/imperial ilk.

This is an incredible beer. Being as a live walking distance from Founders Brewery, I have had my fair share of Breakfast Stout. I was in Toledo on business and stopped in Maumee Bay Brewing and immediately the "breakfast stout" tag on this beer caught my eye. I hate to say it, but it's better than Founders. Incredible flavor. Heavy chocolate, chewy, with an almost caramel after taste. I left with a few four packs and it's just as good in bottles. Don't pass this up if you see it!

Total Eclipse Breakfast Stout brewed by Maumee Bay Brewing Company, with an ABV of 9.10% This American Imperial Stout pours from a 12oz bottle into a pint beer glass. The color is a deep brown color with a nice light brown head. This brew has the look of black coffee, not saying that is a bad thing. There is also a nice amount of lacing to this brew, it sticks to the side of the glass well. The smell is rich with roasted grains and malts, with a slight sweetness. You also pick up in the smell is coffee an mirror hop bitterness. There is a lot going on in Total Eclipse Breakfast Stout. Now for the taste, it is Bold with Roasted goodness. You pick up on coffee notes as well as oatmeal notes. This all mixed with roasted grains, malts, an hops. A well put together Stout. The body of this Imperial Stout is medium to heavy, but not to heavy. This brew goes down nice an smooth. There is nothing overpowering about this brew, it has a super nice balance to it. It is really hard to pick up on the 9.10 % ABV in this brew, it is just that smooth. The mouth feel is Bold, Rich, Roasted, Clean, Smooth, an Refreshing. Overall I am going to give Total Eclipse Breakfast Stout a 4.50 out of 5. I would definitely look this brew up again giving the opportunity to. Maumee Bay Brewing Company, did a super nice job with this brew.

This beer is so close to Founders Breakfast Stout. This is an exceptional beer and I wish there was a way to purchase it in PA. Pours a very think dark brown color with a very large head. The aroma of chocolate and coffee fills the room. The taste is very distinct and full of rich flavors.

I highly recommend this beer.

This is better than Founders Breakfast stout, and I can't believe I just typed that

T - The open starts like the nose, coffee and chocolate, roasted malts and a sweeter line, and a subtle bitter finish.

M - Brisk, good carbonation, with a sticky feel that dries out in the finish.

A: Served with a very small amount of dark tan head. Pours a dark back.

T: A very well blended flavor profile. It starts off with a sweet and roasty blend that fades slowly with a hint of alcoholic heat.

O: This is an excellent stout: thick, rich, and flavorful. Not too complex, but it does a.few flavors very well. Definitely worth trying if you have the chance.

Decent pour, hoping for more of a fluffy, longer lasting head. Sweet milk chocolate, rich coffee on the nose. Something tastes not quite right for a coffee stout. Bitter, fruity berries finish the taste. It's not exactly off putting but not my favorite profile from the coffee. Good mouthfeel, silky. Glad I just bought one bottle.

Too thin and not impressive overall. Way overrated imo.

Thanks to BobSacamano12 for this bottle…yes, it’s clearing out the back of the fridge week! No idea how this one got lost. It sounds good. 12 oz. bottle split with no one.

The pour is as expected: jet black, with enough carbonation to thwart my bubble-averse daughter. Nose is as underwhelming as Atlanta in August, with weak coffee & faintly sweet malts vying with, well, not much else. Meh.

Total Eclipse Breakfast Stout is like that Uncle everyone has: not scary, or offensive, but not an experience you want to repeat. Or perhaps even finish. Grainy roast dominates in a water-driven kind of way, with a light sweetness accompanied by the jarring twang of a hillbillies’ bango. And that aftertaste, that aftertaste is where this beer fails. Finish twists into bonfire ashes with a slice of dark fruit that’s just starting to over ripen. The beer I could stomach. The after effects are too much to handle.

Clearly there is something turning in this beer, & turning the wrong way. I’m not sure what it is, but I’ve never craved stone fruit roasted in hot ashes. My first drain-pour in quite some time.

Maumee Bay Brewing serves up a winner with Total Eclipse Breakfast Stout. I poured it into a tulip glass and it produces a very nice head and retains lacing around the glass. The 9.1 ABV feels just right for this stout which can be enjoyed any time of day-not just for breakfast anymore! It has a great feel in the mouth, not incredibly thick, and it certainly doesn't taste overly boozy. We picked up a few 6 packs while visiting the Brewery in Toledo this past summer and it was a wise choice. This is a 2019 edition and true to its name, it does eclipse all light, swirling around in my glass in all of its inky black richness. The coffee flavor comes through cleanly and notes brown sugar, oatmeal and chocolate blend well. For fans of higher ABV stouts, this beer is a total eclipse … of the heart!

This one pours out a deep, rich dark brown.Surprisingly, I still get a one finger head with fair retention and light to moderate lacing on the glass.
The smell is what I was hoping for: rich, deep roasted malts with all the bittersweet dark chocolate nuances and, not to seem repetitive, but a very rich dark roast coffee presence as well.
The taste follows suit,and it's no wonder; this one is a collaboration between MBBC and a local gourmet coffee and chocolate producer, and their product is excellent. This is the combination connoisseurs and beer advocates dream of.
The mouthfeel is nearly as big, thick, rich, and robust as off the tap, though it's thinned just a little.
I'd love to sip this at any time of day, all day long. A high ABV lowers drinkability, but I'd be daring enough to hold this up against Founder's Breakfast stout or any of the big boys. It's not better (they are amazing, after all), but I can honestly say I believe it's as good.