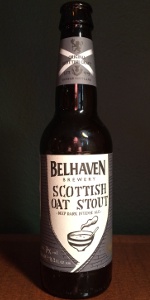 Notes: This deluxe stout is brewed for a full roasted chocolate flavour with a hop character that complements a blend of triple malts. Drink, savour and enjoy.

View: Beers
Reviews: 42 | Ratings: 133 | Log in to view all ratings and sort
Reviews by biegaman:

Belhaven Scottish Oat Stout pours with its own soundtrack! Its loud, symphonic head fizzled and crackled until almost every last bubbles was gone. It balded like a human - eventually all that's left is a smooth round surface and thin strands of gray that barely hang off the outsides. The liquid, however, has a strong, hardy black tone that looks invincible.

Though not overly pronounced or aromatic, there's enough of a gooey chocolate pudding smell to make you go fetch a spoon. This doesn't have the intensity one might expect from a 7% stout. It's a curiously subtle profile, absent of any big roasty notes. There's actually a faint hint of bread pudding (think dark syrup, raisin, a splash of heavy cream).

The taste certainly isn't flashy either. The oats have provided a superlatively velvety-rich mouthfeel but there isn't quite the profundity of flavours to match. Sure, there's definitely some gooey chocolate fudge and milky coffee but it's not exactly the deluxe package. There's also a breakfast tea-like bitterness on the finish that's a little astringent.

Despite the alcohol content (which is undetectable anyhow), this is not the kind of stout to open if you're in the mood to kick it up a notch. It's not terribly big on flavour and wholly opposed to intensity; this is clean, carefree and uncomplicated. Let's put it this way: if smooth and simple drinkability is your thing - you're in the right place!

I loved Belhaven Scottish Stout (7%) and could take-or-leave their Black Stout (4.2%). Scottish Oat Stout falls somewhere between the two, with glimpses of the chocolate syrup and fruit reduction flavours of the former but also possessing the underwhelming mildness of the latter. It's a decent offering but not a standout in Belhaven's expansive, impressive portfolio.

I love what oats do for a stout, and this one is no exception. Smooth, rich, with mild sweetness. Great from nose to finish. Well done.

L:
-pours the darkest of brown with no light coming through and a medium,frothy,beige head
S:
-Cafe Crema,Soy sauce,licorice,milk chocolate,oats,cherries,acidic
T:
-Cherries,metallic,cafe crema,toast,acidic
F:
-medium carbonation
-light to medium body
O:
I'm not into overly acidic Stouts, though this is one of the better variety

Very enjoyable. Texture is between light and medium, with soft carbtion. The first hit of flavor is a very pleasing sweet coffee like taste, with hints of chocolate, and fruity-prune like sweetness. While balance is probably more on the sweet side, it has a very nice bitter aftertaste that feels roasty/smokey.
Im not used to drink stout very often, and this is the first oat stout I try. I really enjoyed it, and surely will drink it again.

A nose on the blueberry and the roasted malts.
The taste follows with a big sweetness.
The oat brings a certain roundness.
Okay stout

Aromas of dark raisins, licorice, coffee, chocolate. Flavour mirrors the aromas with a hint of almost peaty smokiness. Appearance is very dark and initially had some nice froth but it didn't last very long. This tasted more like a porter to me than a stout but definitely enjoyable either way.

World Class Brew. I never knew Stout could taste this good. Similar to a dark porter. It works very well. I would say the best in the Belhaven range.

Aroma is of milk chocolate, currants, raisins, creamy oatmeal and a little bit of black licorice and caramel.

The body is medium in weight, smooth and silky, but not overtly heavy, giving the beer a creamy mouthfeel while still remaining crisp. This feels seriously velvety and sexy.

Starts off with flavors of creamy malted oats, sweet milk chocolate and slightly bitter light roast coffee. Notes of caramel and custard. A slightly tart, sugarplum flavor creeps in on the finish with more notes of milk chocolate towards the tail end. Faint notions of black licorice throughout the background.

My overall thoughts are mostly positive. This is a very easy drinking, silky and creamy oatmeal stout that leans towards the sweeter side of the style spectrum with flavors predominantly of milk chocolate, sugary oatmeal and dark fruit balanced out by mild notions of coffee and black licorice.

If it came in six packs I could see this being a staple in my fridge.