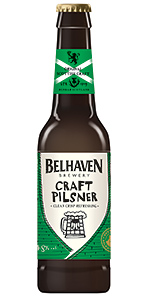 Notes:
View: Beers
Reviews: 12 | Ratings: 47 | Log in to view all ratings and sort
Reviews by BigGruntyThirst:

330 mL bottle from the LCBO; one of six different brews included in their "Merry Craftmas" seasonal sampler. Best before May 2017 and served well-chilled.

Pours crystal-clear golden-yellow in colour, with one finger of loose, foamy white head that recedes within a minutes' time. An unassuming collar is the only remnant, save for a few patches of wispy foam on the surface. Grassy, weedy hops and lager yeast on the nose, with a twinge of sulfur and grainy, doughy pale malt and digestive biscuit sweetness. So far, it looks and smells like yer average run of the mill pale lager.

The first couple of sips mostly just reinforced that assumption for me. The taste is of grainy, biscuity pale malts; lightly sweet, but balanced appropriately by continental hop flavours on the back end - grassy hay, compost and a few floral notes. Finishes with a hint of lingering biscuity malt sweetness that soon fades. Light in body, with aggressive carbonation whose bubbles relentlessly pelt the tongue with pricks. As a guy who likes pilseners (and generally grades them more leniently than most BAs), nothing about this one is really standing out to me, other than the fact that it's very easy to drink. And that's hardly a noteworthy trait for a pils - more like a minimum requirement, actually.

Final Grade: 3.49, a B-. I find Belhaven's Craft Pilsner to be a fairly boring lager, but in a pinch I suppose it could work as a serviceable, one-after-another session pils. The tone of my review may seem a little unnecessarily harsh, so I'll clarify - this is absolutely NOT a bad beer. In fact, it's a reasonably decent German-style pilsener: I am detecting no discernible flaws whatsoever, and I enjoyed my glass for whatever that's worth. Miles ahead of the average American or Canadian macro lager... but I still don't think I'd pick this over a Jever, Radeberger, Warsteiner or Bitburger. Still, I'm glad to have had the chance to try it.

A 330ml bottle with a BB of March 2015. Picked up a little while back from a B&M store. Described as a classic, continental-style pilsner with a biscuity aroma.

A: Poured into a stemmed pilsner glass. A clear golden-amber colour with faint floating sediment and light carbonation. Forms a large head of creamy white foam that lasts for a minute or two before reducing to a patchy surface layer. Slight lacing.

T: Tastes of light, grainy malt with a faintly sweet character and a mild finish. Notes of biscuity grain, mild grass/hay, subtle yeast esters, faint earthiness and a twinge of stewed hops. Well-attenuated, followed by a delicate bitterness upon swallowing.

O: Won't blow your socks off but not too shabby either. Looks alright, while the aroma and flavour are an unchallenging blend of grainy malt, mild grassy hops and subtle yeast. Body is OK. No world-beater, but a drinkable lager that comes out ahead of the macro competition. Worth sampling.

It tastes like a Pilsener made with a Scottish malt bill. Unusual/unique in a pleasant way.

I wouldn't pick this out as a lager if i'd drunk it blind. Certainly not a pilsner. It's ok, but rather boring

Copper with a moderate amount of carbonation, and no head. Clear filtered.

Smells of scotch, toasted malts, and hints of apples.

Tastes very malt forward, with scotch and apples and toffee.

330 ml bottle served cold into a pint glass. One of the six beers in the Merry Craftmas holiday pack.

Smell - Grassy aromas mostly, not a big nose at all. A hint of earthiness.

Overall - One of my least favorites from the holiday pack, there's nothing wrong with it as it;s a decent pilsner, it's just not terribly great in any way.