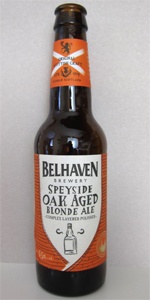 Taste: A flavor akin to sweet warm honey with a pat of butter. Scant bready malts. Softly fruity, mainly faux apple like the aroma. The upfront sweetness adjoins to vanilla, giving a little touch of creme soda from time to time. Modest whiskey, woodsy notes. Remains sugary through the finish.

330 mL bottle included in Belhaven's "Merry Craftmas" mixed six-pack, which is currently rolling out to LCBOs across Ontario. Best before Nov 2017 and served slightly chilled.

Pours a sparkling clear medium golden colour, with one finger of soapy white foam produced at the surface, while a diffuse stream of bubbles lazily snakes its way upwards from the base of the glass. The head dissipates evenly over the next few minutes, leaving a frothy ring behind, clinging to the perimeter; looks OK, though the lack of lace is saddening. Toffee and butterscotch on the nose, with hints of leafy, floral hops milling about just underneath; subdued notes of oak and vanilla provide a much-needed semblance of depth, while apple-y orchard fruit esters only add to the saccharine feel of this brew's aroma. Definitely on the buttery side, but not really an outlier in that respect - at least as far as English-style pale ales go.

The label calls this beer "complex and layered", but I'm not sure I'd use either of those terms to describe it myself - rather, I find this to be a pretty straightforward, two-dimensional beer. Toffee/butterscotch flavours start things off, with the woody oak and mild vanillin notes imparted by the staves acting as a suitable complement. Hints of apple and apricot come to the fore by mid-sip, with leafy, floral hop dryness on the back end - but it winds up being quickly overcome and forgotten, as the sweet toffee and oak notes return with a vengeance at the finish. Light-medium body, with moderate carbonation levels and a relatively smooth mouthfeel. I don't dislike this beer, but it lacks depth, and it's probably not something I'd want to drink more than one serving of per night.

Final Grade: 3.55, a passable B. While certainly not a bad beer, Belhaven's Speyside Oak Aged Blonde Ale mostly comes off as a poor man's Innis & Gunn Original (and I'm also sure I'm not the first to make this comparison). If that's your bag, then don't hesitate to go forth, purchase and imbibe without delay - I have a feeling this one is probably a bit cheaper than I&G. But if you've 'been there and done that' before, I wouldn't expect this beer to rouse your enthusiasm much, if at all - and the fact that it lacks much of that (highly touted) Speyside whisky flavour only compounds the disappointment. An average effort that could use some tweaking.

Served chilled into stemware. Expectations are above average given the brewery.

APPEARANCE: ~2cm white cap. It's a bit thin, but has above average retention (~3 minutes). Body is a clear clean copper of above average vibrance. Appears adequately carbonated. Its a decent look for a blonde ale, but no characteristics stand out as unique or special.

AROMA: Vanilla-forward oak. Heavy barrel sugars. The barrel character in general has an artificial ring about it - vanillin flavouring, certainly. Blonde malt and pale malt sweetness. Apple is quite prominent, injecting a cidery character throughout. I'd go as far to say that it almost smells more like a cidre than a beer, and the buttery diacetyl off-note that runs rampant here isn't helping.

Unrefreshing, light-bodied, well-carbonated. There's no harmony of texture and taste here. It's cohesive enough, but there's no depth of flavour whatsoever. Very simple and plain. None of the complexity you'd hope for given its oak aging ever manifests.

OVERALL: The speyside and oak aging is all marketing schlop...maybe this sat on oak staves for a week and technically qualifies as oak aged, but there's zero whiskey presence unless you count the artificial vanilla additive. The result is a brew that reflects less on the rich history of Scottish ale brewing and more on 21st century attempts by contemporary breweries to cash in on the whisky and oak aged trend without really spending the brewing capacity and money to do it right. If diacetyl-forward beers are your bag, this might be worth picking up. For the rest of us, it's best described as a dollar store Innis & Gunn, and while drinkable, I can't recommend it to friends or discerning drinkers. A poor effort from Belhaven.

Pours a deep gold with reddish tint. No head with some lacing.

Taste is sweet with more oak coming through toward the back end.

Mouthfeel is light with slight carbonation.

Aftertaste is perhaps the only misstep, mostly pleasant with a slight metallic hint.

Overall one of my favorites. Can't beat the price for an oak aged ale.

Pours into a nonic a clear copper color with a thinner white head atop.A bit of toasted oak and some sherry-like aromas wich I wasn't expecting to go along with alcohol dipped fruit.Buttery caramel and fruits on the palate with that kind off putting sherry-like lactic note underneath,mild oak is detected as well.Not a huge fan of this beer,the lactic sherry notes do nothing for me,oh well.

Bottle picked up at Prefunk Nampa.. Pours clear amber with a fleeting white head.. okay lacing.. big pale malt presence on the nose makes me think this is gonna be syrupy on the palate, thankfully it is just nicely malty with oakiness and sweetness I associate with some tawny ports, not exactly whisky or Scotch.. Medium/light body, more complex than I feel like describing.. a little clove spiciness on the finish.. Weird and interesting.

Bottle. Clear amber. Frothy head.
English fruity hops. Vanilla with hints of oak and whisky.
Taste is reflective of the bouquet but sweeter than anticipated.
A reasonable well rounded feel.
Similar to their Querkus ale which is far more muted. Not an ESA but style can be very difficult to pigeon hole these days.

Great looking with a clear copper body and a very good head.

An unusual ale in feel, aroma and flavor. The aroma is dominated by sweet malts and oak soaked in whisky. The distinct flavor follows the aroma. The aging/oak/whisky effects are moderate rather than subtle or over-powering. More oak than whisky in the aroma, but fairly balanced in the taste. Lightly sweet.

Bottled purchased in England. Pours clear, gold in color with one half inch head. Taste is oak, honey, and pale malt. Medium light bodied, moderate carbonation, and sweet. Great use of oak. Makes for a complex malty treat. Will get this again.

Appearance: A beautiful clear copper body that seems to boast the range between red and gold depending on the light that showcase steady carbonation makes up for the single finger of head that didn't lace or retain.

Smell: Oak, vanilla and honey with a backing of bready malt. Warmning brought it out slightly but it didn't require it by any means.

Taste: A mix of caramel and shortbread malt starts us off as the mild old gives way to ample vanilla, butterscotch and a faint whiskey taste. I really like that despite the emphasis being on the oak, the beer is still present.

Mouthfeel: The beer at it's peak becomes a bit too sweet for my liking, but thankfully it does cling, leaving a nice caramel and vanilla aftertaste. The carbonation however isn't the greatest, as it turned flat around the 1/3 left mark.

Drinkability: This is an ideal desert beer, as it's light but has a nice sweet taste that reminds me of eating ice cream caramel and butterscotch on it. That said, I wouldn't be grabbing this on a hot day, but that's not exactly the point. Settles down remarkably well.

Final Thoughts: Probably the best of this mix pack I've had thus far. I really expected this to just be a beer pretending to be a whiskey, but I was presently surprised. I think they did a great job of not leaving this in the barrel too long. Maybe one day less, and it would be perfect. Either way, thumbs up.

Looks promising. Nice orange color and head with ample lacing. Smells like apricot nectar. Flavor is sweet and fruity with no oak flavor. Dense, sweet body. Not a huge fan.