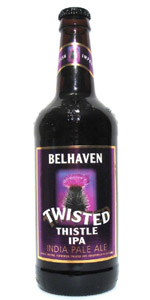 Normally I am not an IPA person, I don't know why but I just don't like them, they taste too burnt. having said that when I saw this IPA on the shelf I was instantly interested because I really like the taste of Thistle, so even though I wasn't happy it was an IPA I figured I'd give it a go. What I liked about this is the Thistle seemed to balance out the burnt taste of most IPA's. The flavors actually complemented one another in a way I wasn't expecting. Good feeling on the tongue as well. This is one that I would def drink again.

330 ml bottle served cold into a chalice. Bottle #4 of #6 of the Merry Craftmas holiday pack. Advertised as 5.6% ABV.

Appearance - A bright, pale golden color with not a lot of bubbles but a fine half finger of short lasting head. Curtains of lace around the edges of the glass.

Smell - Pine is the dominant factor here with some lemon citrus adding to the concoction. A certain earthly characteristic about the aroma too.

Taste - Plenty bitter but lots of malt too. Well balanced. The pine and earthiness come together with some lemon and some tangerine to make a nice sipping experience.

Mouthfeel - Body is light and on the thin side, carbonation is on the low end of moderate, Easy to drink.

Overall - A decent IPA, but lacking intensity especially compared with American IPA's. Worth a try, but don't expect to be blown away.

330 mL bottle from the LCBO, included in their "Merry Craftmas" sampler pack and listed at 5.6%. Best before Sept 2017 and served slightly chilled.

Pours a clear, medium gold colour with a twinge of amber; one finger of soapy white froth floats upon the surface initially, but largely dissipates within the span of a minute or two. A generous collar of foam survives afterwards, alongside a patchy cap and a modest swath of lace. Looks like a pale ale is supposed to, I guess. Doughy pale malt sweetness on the nose, accompanied by a decent-sized dose of floral, leafy hops, with a few suggestions of lemon, golden pear and caramelized sugars. Smells more like an English IPA than an American.

So, given how closely the senses of smell and taste are related, it shouldn't be a surprise that I think it kind of tastes that way, too. Clean flavours of bready, doughy pale malts and light caramel sweetness are just detectable behind the curtain, allowing the trio of Challenger, Hersbrucker and (especially) Cascade hops to dominate the stage. Very floral, with hints of citrusy orange and lemon zest mixed in with fruity notes of pear and apple. Resiny pine and more floral bitterness are what characterise the tail end of the sip, though they quickly fade upon reaching the aftertaste, which I'd call off-dry. Not quite light-bodied, but sort of leaning to that side; the bubbles are fiercely persistent in their capacity for agitation, which gives this IPA a crisp, lively mouthfeel that is much lighter and more refreshing than most others.

Final Grade: 3.74, a B grade. Belhaven's Twisted Thistle IPA outperformed my expectations, but not by all that much. Truthfully, if you are looking for an American-style IPA, I don't think this is a beer that I'd recommend, though it's not exactly a bad interpretation of the style. Sort of in that grey area between the English and American (sub)-styles, though the resiny, citrusy impact of the Cascade hops does sort of nudge it toward the latter - but not enough to allow it to compete with the heavyweights. As a simple, hop-forward pale ale it's actually pretty well-constructed - I'd drink this again if it happened to be there, but I wouldn't seek it out again intentionally.

This beer pours pale amber with an average head. The aroma features caramel malts, pine, and lemon peel. The flavor starts with mild pine, then lemon and orange peel, caramel and toffee malts - overall drier than I expected. The mouthfeel is semi-light, and nicely fizzy. Overall this is a very pleasant and drinkable beer with a piney-lemony heart.

From the bigger bottle in a snifter. This nice IPA pours a nice lightly
chill hazed orange tinged amber with a light head of white foam that settles to
a thick ring, thin pool, and light lacing. Nose of floral elements akin to flowers
with touches of light pine and herbal hops touched by honey sweet malts. Flavors
hit the right notes for the style with honey and light breaded malts touched by
subtle citrus and a touch of light ginger laced caramel. Nice mouth feel well within
the English mold; smooth, medium low carbonation, and a sweet lightly herbal hop finish.
Overall a classic from a solid brewery.

Poured from a tap into a pint glass. A clear amber-orange color with a frothy off-white head. Typical citrus IPA aromas, but paired with fruity estery notes and also a nutty-sweet malt presence. The taste was similar with orange, bitter grapefruit, floral notes, lemons, and a slightly sweet malt presence. An interesting English IPA, but a bit too malty for my taste.

Another selection that was currently available at the LCBO that I thought I'd give a try, and I'm glad I did.

This poured a nice amber with a decent looking inch thick head that slowly reduced to a slight ring. Smell is sweet, some hops deep in there, quite nice overall. The flavor of this brew is quite nice, an assertive hop character with some barley malt, Pretty decent.

This is well balanced and very drinkable brew, And I'd get this one again.

Pours a light amber colour with a thin blanket of head. Not a whole lot of visible carbonation. Not really any lacing. Looks like beer.

Mostly hard-water minerals come out in the smell, along with some honey-roasted malt, a bit of yeast and some stinky-feet funkiness. Not really any hops.

Quite watery, some sweet honey flavour as found in the smell. More hops in the flavour but not nearly as much as I like to find in an IPA. 6% is not noticable. Very little aftertaste. Tastes more like just a PA; where's the I? This is a weakly-flavoured beer; I feel like I'm drinking beer-flavoured mineral water.

I think this could be the first Scottish beer I've tried. I'm not impressed. This is borderline-drinkable for my taste, just way too bland. There's nothing interesting about it; it actually doesn't really have anything going for it. Goes down smoothly enough, just not that great. How is this averaging a B+?

Poured a slightly murky, orange color with a thin, soft white head that dissipates quickly and leaves behind just a hint of lacing. Low to moderate level of carbonation with some big bubbles covering the surface. Aromas of earth, alcohol, mild hops, and juicy fruit come to mind. The taste is well-balanced with sweet malt & fruit flavors balancing the soft hop finish. The hops are soft and rather mild without floral or grapefruit/citrus aromas or flavors. Suprisingly creamy and textured in my mouth. Smooth and yet crisp, pairing nicely with my pasta in a spicy tomato sauce. Flavorful and well crafted but not overly unique or special. I wasn't interested in another, though I enjoyed the bottle I drank.

Poured an incredibly massive thick craggy head that lasts and lasts leaving ery sticky lacing in it's wake. Beautiful. Crystal clear amber coloring in the glass.
Aroma is pine and apricots...soft fruit and bread.
Taste is a surprise as well.
Soft mouthfeel as you taste lightly sweet soft fruit...apricot, peach....bread dough yeast....and centinial or cascade type citrus hops.
Wonderfull drying finish yet without a sharp bitterness typical from an IPA....flavors just slowly melt from your mouth.
This is far, far too drinkable.
Wonderful take on an IPA

Poured amber yellow with a very thick head. Had a large amount of sediment floating in the beer. Large grains and flecks of something. I have had plenty of IPAs before and have not seen anything like this.

Beyond the appearance, everything was great. Very crisp aroma, you can already sense the strong hops flavor. Tastes great. Very rich with a great dry finish. Not too watery.

Served from a 375 ml bottle into a pint glass.

Appearance: Pours a hazy orange with a white creamy head.

Taste: Starts with out a malt sweetness that moves to a bitter/pine hop flavor. Ends slightly dry. As the beer warms a smokiness comes out which is not overpowering at all but adds to the flavor of the beer.

Mouthfeel: Smooth but slightly chewy Mouthfeel with the right amount of carbonation.

This is my first English IPA and thought that this was a good brew. I look forward to trying other beers from this brewery.

yellow/orange and hazy with a thick foamy head that leaves a few specks behind. smells of grape juice and some light hops. wait.i have to stop and smell this for a minute to be sure of what i'm smelling.

tastes strongly of bready malt, biscuits, and, grape juice (that grape juice taste is horrible!) it's sweet and has a buttery astringent taste that reminds me of a newcastle. the hops, on the other hand, bring citrus fruit and pine to the table. slightly bitter, well balanced. well carbonated, easy to drink, but i won't be buying this again.

there's something off-putting about the grape juice smell/taste. the rest of the beer's good qualities can't redeem it.

this is a really weird beer.

Great looking beer on the pour. Light copper and slightly hazy. A decent sized head that went away but left a wonderful cap. Great lace. Some suspended floaties. I like it.

Aroma is very floral and grassy. A touch of citrus and a touch of chocolate. A bit of caramel and a lingering of pine.

A good mouthfeel. Creamy on the palate. Bubbly on the swallow which seem to wash the flavor away quickly. Some dryness.

This beer pours a nice honey colour with nice carbonation that leaves a fast vanishing one finger head with only a ring a lacing,it has a nice floral,citrus,honey hop aroma to it very nice indeed,it has an above average mouthfeel with a dominant citrus,honey hop start that finishes with a nice touch of caramel maltiness and a tinge of bitterness but not that bitter by any means and alcohol is well hidden making this beer very easy to drink as a session beer.