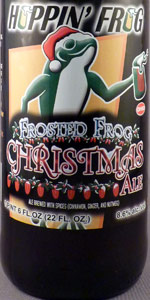 a - poured a one finger thick tan head into a snifter that disappeared before i could even say hey to it. the body was a clear mahogany.
s - sweet with some spices.
t - caramel, toffee, hint of toast with cinnamon and allspice.
m - medium and slick.
o - disappointing beer that didn't have a lot going on. kind of boring.

If you are not into spiced beers, stop reading now. This Is not the beer for you. If, however, you enjoy a nicely sweet holiday ale with a high enough ABV to warm you on a cold night, this is a good one. I poured this into a standard pint glass. The fizzy beige head dissipated quickly, leaving a trace of foam atop the dark reddish brown body. Cinnamon and ginger dominated the taste, leaving a very pleasant sweetness behind. It had a rich, semi-thick mouthfeel. This functions nicely as a dessert beer, or as an evening sipper. I'm planning on picking up a couple more of these.

This is normally NOT my kind of beer. I don't like gingerbread cookies or cinnamon in my beer...but this was just the right amount of both. It was fantastic, and I would gladly order it again!

Smell is quite sweet and spicy. I'll liken it to a cherry pie with a healthy dusting of cinnamon on top. As it warms, some nutmeg and alcohol come through.

Flavor kicks in with nutmeg, allspice, cocoa powder, and dark cherries. As it warms, the aftertaste and mouthfeel, unfortunately, is reminiscent of cough syrup - slightly cloying and bitter.

Drinkability suffers a bit from the mouthfeel, but for a 8+% spiced winter warmer, it's about average. I'd recommend sharing this with someone - 22oz is a bit much on its own.

Pours dark bronze with a foamy, off white head. Aroma is straight cinnamon with some ginger and candy. Flavor is very spicy cinnamon... maybe too much. It gets easier to drink as it warms. Nice mouthfeel and body. This is a decent beer, but won't replace Great Lakes as my favorite winter seasonal. 8 bucks is too much for a bomber.

Poured into an imperial pint glass. Color was a nice dark amber with a thin dirty white head. Head disappeared quickly, but left a small ring that clung nicely. Aroma was exactly as described. Cinammon with some ginger smell, slightly on the sweet side. Very much a winter smell. Flavor was spicy, but yet still pleasant. A bit of sweetness, and the aforementioned spices were nicely balanced. The cinnamon was up front, with a bit of ginger to finish the sip. Coated nicely in the mouth, went down as it should. Overall an outstanding beer. A little tweak in the flavor would help, but minor issues.

Bomber served in a Duvel tulip

S - aroma is strong cinnamon, apple cider, and ginger. Knowing that this is a spicy winter warmer, this is a welcome blast to the senses

T - big time cinnamon, a bit of sweetness, dark fruits, and then malt in the end.

M - smooth, a bit of alcohol in the end, not much carbonation

O - for a winter warmer, this is a very good beer. In the right setting, I love this kind of beer. Definitely not an every day beer, but for a cold winter night, this is an excellent companion.

A: This poured a clear dark copper with some light tan head.
S: It smelled like lots of nutmeg and cinnamon and mulled spices, with a little copper hops and caramel.
T: It tasted like strong mulled spices with cloves and nutmeg and cinnamon, and a little caramel and toffee and copper. It had a mostly clean and herbal aftertaste.
M: It was watery with a little carbonation. Decent body.
D: This was a lot like just drinking mulled cider, without much to distinguish it as beer. Still enjoyable scent and taste, and well hidden alcohol. The body was a bit weak, but it was easy enough to drink. Nice winter brew (or for Christmas in July).

Frosted Frog pours a dark amber color. It's a little hazy, but plenty of light bleeds through and reveals nice scarlet highlights. An off-white head caps it off and stands nearly two fingers tall. It's relatively quick to recede and leaves very light, spotty lace behind.

The nose is not deep or complex, but is good. It's full of holiday spices throughout. There's definitely no shortage of cinnamon. Ginger and nutmeg and present to a lesser extent, but cinnamon is very prominent throughout. Caramel malt adds a sweet scent to it. There's some light yeast and hops on the tail. Alcohol is buried. I'm not getting any at all. Overall, it smells good. I like it.

The flavor is, for all intents and purposes, a carbon copy of the nose. Holiday spices are the focal point and resonate throughout each sip. Cinnamon is front and center, but nutmeg and ginger are noted. It's almost a little too cinnamon heavy. Not quite, but close. Caramel malts anchor it down nicely and give it just enough of a sweet flavor to complement the spices well. A little yeast is noted. Alcohol is blended extremely well. I'm amazed that this is an 8.6% beer. I would've guessed closer to 6%. It does not seem as strong as it is in any way. It finishes a little sweet and spicy.

Frosted Frog has a medium body that is nice and smooth. Carbonation is dialed down to just the right level. It's not quite thick enough to be creamy, but that's not a big knock on it. It has a nice feel. Drinkability is very high. This is tasty stuff that's deceptively strong. I could probably take down a couple of bombers and be very happy to do so. Gotta be a little careful with this frog.

Frosted Frog is an impressive Winter Warmer. I like it a lot. More than I thought I would. I do think there's slightly too much cinnamon. But, there's not too much else to gripe about. Great Lakes Christmas Ale has been my favorite of the season for a while. Frosted Frog doesn't change that, but it's certainly a contender. I'll be sure to pick up at least a couple of bombers annually. Definitely check it out if you have the opportunity. Merry Christmas!

22oz bottle from Ale Yeah! in Decatur. Pours a dark orange with a somewhat short head. Redolant of spices in the nose. Nice cinammon, ginger, and lesser nutmeg aromas. Slightly sweet in the mouth, with bubblegum to start, followed by more spice- particularly ginger, with some cinnamon and nutmege in equal parts, and a finish that has more maltiness. Quite nice for the winter. Smooth, slightly sweet, and a bit nutty on the finish. I enjoyed this.

When I wrote the review below I had only had the barrel series. I don't believe there was a distinction yet, on site, or I missed it. I heartily recommend the barrel versions, but the basic Christmas ale seems to lack the complexity of, say, Maduro from Cigar City. Even the spices don't help enough to save it from this comment. It really needs the aging in barrels to set it apart from other Xmas ales, or even a really great brown ale.

This is not as good as most Hoppin Frogs, but not "bad" by any means. Just nowhere as good as it could be. The balance is fine. Nothing wrong, it just doesn't stand up and say "drink me." I even tried a bullwhip and electro-shock therapy.

Thin body without complexity. Spices are pretty much perfect: nice balance of cinnamon, ginger and nutmeg. The spicing is the best part. Appearance: nice clarity with slight off white head... mostly pillow and a few small rocks.

On the other hand it's a nice, mostly, blank slate on which to do great barrel aging: which is what they did. Kudos.

"This was described to me as the bourbon barrel forward, oak barrel aged, version of their brown ale: the spiced Christmas Ale at the brewery where I stop every year. That's exactly what it is. Incredible oak nose but as it warmed the bourbon dominated, oak second, brown malt third and spices in the end, but not far off enough to make them insignificant."

" This year there were three versions. Regular, oak aged forward, then oak aged bourbon forward. This was the bourbon version, but the magic here is everything else comes through the bourbon sweetness."

" Not heavy bodied, but true brown ale medium on the lighter side."