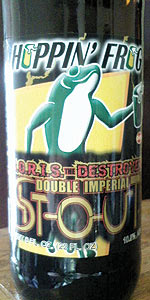 Huge, super fluffy, marbleized brown and black whip cream thick head atop a licorice black liquid. This pours almost as if it is on nitro, but the colors are exactly the opposite of uniform and bland, and the aroma makes it extremely evident that it's not on nitro.

Huge walnut and roasted coffee aromas come off the nose.

There are super walnutty, roasted coffee, chocolate, and extremely flavorful malt characteristics just bouncing around everywhere. Frog absolutely kills it with this brew. This is not overly bitter on the coffee notes. It's very well balanced. Unbelievable.

Once you get it on your tongue, even without swirling it around, an immensely creamy, almost pudding like texture comes through that is just absolutely sublime, so delicate yet so damn rich. This is one of the softest, yet densest most luscious brews I've ever felt. And it doesn't hurt that it's absolutely delicious. If not for it's assertive hop presence, this beer would be effing perfect.

Due to a similarity in brewing ethics and a love for the darker side of styles, I thought it fitting to do a side by side with two of my favorite unadulterated stouts, DORIS and Marshal Zhukov, which I was finally able to do early 2017. Zhukov is a little sweeter like there's chocolate cherry, maybe some cedar or wood. One person did mention soy sauce. DORIS is more roasty, chocolatey and nutty. When they warm Zhukov has more licorice and molasses, while DORIS is hoppier with pine, cedar and even lime...? Not the primary flavors/aromas, but just the little notes that set them apart from each other. Conclusion is unanimous: these are both two righteous beers.

In mid-July 2017, I opened a 2010 and 2013 bottle on the same night. While I was not surprised by these results--they were still quite impressive. Both beers held up and were insanely delicious, without a hint of the normal notes you usually get from old, lesser stouts like the staleness of cardboard, molasses, raisin, or others whatsoever. Both were a little more airy, yet still intensely roasty. While the '13 was more chocolatey and sweet, the '10 was more nutty, with a lot of coffee notes, really coming across like rich mocha ice cream. The '13 was smoother in body while the '10 was more balanced and less sweet, but also had less carbonation.

Smells of chocolate and roasted barley, tinged with a touch of molasses.

Thick and oily; long wet finish. Exceptionally easy to drink, although it comes off a touch flat.

My only complaint is this brew drinks too easily; there's no bite. Many stouts achieve this through hops, extra alcohol, or massive roasty bitterness. This beer has none of that, and yet also doesn't quite merit dessert stout status. Very nice, but it left me wanting more.

22oz bottle at fridge temp poured into a snifter.

pours out an extremely dark black, burnt up motor oil. about one fingers worth of some super dark brown head, creamy, good retention, and leaves some nice lace. this is a seriously dark looking stout.

super roasted, burnt charred malts are what i pick up most in the aroma. a bit of booze and dark fruits as well. dark dark cocoa.

again, big roasted, burnt malts, as well as some toasted/ roasted grain flavor. burnt char flavors are all over this. some dark dark chocolate plays off all the roasted malt with hints at times of dark fruits. finishes with a bitter cocoa roast flavor and a spicey, booze finish.

creamy, silky smooth. big body, carbonation is right where you would want it for a beer like this.

a solid imperial stout. i enjoyed this more than boris for sure. if this seen extended time in a bourbon barrel i think it could really be magical.

22oz bomber poured into my Door County Brewing oversized snifter (one of my favorite pieces of glassware). Thick body, lovely mocha / tan head combined with very good lacing and retention. I'm glad the mouthfeel is thicker than expected here. One of the better stouts off the shelves here at 10.5% for sure. Smell and taste of espresso, dark chocolate and slightly charred oak.

22oz bottle poured into a globe.

A: Jet black pour. Dark brown head retains at a half inch. Lacing is spotty.

M: Huge in stature. Thick with a definite sense of weight. Velvety smooth texture. Some sense of gripping hop astringency. Fine carbonation has a stiff prickle.

O: A huge, bold, and demanding brew. It has your full attention until the last sip. This is not for the casual beer drinker. Drinking it feels like an accomplishment; finishing the glass is like reaching the peak of Kilimanjaro or something. It was a memorable and rewarding experience and I learned something about myself along the way.

Thanks for Draught2012 for bringing this to our impromptu tasting last night.

This was our night cap beer last night and I'd have to say it was the proper choice. Touch to turn to anything else after this viscous black thing.

There is a head the forms for a moment and immediately vanishes. No lacing. The beer is visually thick and virtually black. NO light getting through here.

Chocolate syrup in the aroma. Some sweetness

What's interesting s that this is initially sweet with again the chocolate syrup taste. Then the sweetness fades and you are left with ash and charcoal. I don't think this works nicely with the big hop bitterness that is also in the finish. Obviously dark roasted malts meld all the way through. I think it would be nicer if the sweetness was more consistent.
I get a moment of brown sugar while drinking this.

Thick with the slightest possible carbonation.

I'd be interested to see how this develops with age. Not among my favorite R.I.S.'s

Still thankful to have tried it.

Bottle into tulip.
Served slightly warmer than fridge temp to warm as I go.

A- Heavy, oily, thick black pour. Had to pour aggressively to get a short lived finger width chocolate milk coloured head. lacing is spotty, alcohol clings to the glass and won't let go.

O- I wasn't a fan of BORIS (poor palate?) But I wanted to give Hoppin Frog another chance. They really did redeem themselves with this one. I'm really glad this is readily available in Buffalo now.

A- Black body with a creamy dark brown head

S- Chocolate and coffee and some sweet vanilla too

O- A very big beer and good to sip on. A very good RIS well-balanaced and great composition

22oz bottle from batch one. drank from my stone IRS snifter. no freshness information on the bottle.

A- the beer comes out of the bottle an inky looking black with a very tiny coffee colored head on it. the head becomes a crown after a minute and leaves behind little to no lacing.

T- the taste mimics the smell. the roasted malt comes across as almost burnt. lots of dark chocolate and coffee. the finish is dry and bitter. the alcohol comes through a little hot.

D- not as user friendly as BORIS. id love to see how a little time in the basement changes this. too strong to attempt more than one.

A: The pour is nearly black with a dense tan head on it. Quite a nice looking beer.

S: The nose is full of char and burnt malts, coffee, and lots of roast. Not as much in terms of the chocolate notes that I tend to pick up with BORIS.

T: This is one roasty RIS. Lots of coffee, roasted malts, and a fair amount of char. Quite bitter for the style, but not necessarily in a hoppy way. More of in the burnt your chicken on the grill sort of way.

M: The body is quite substantial, which is no surprise. And the carbonation is minimal.

D: This was pretty disappointing, actually. I really enjoy BORIS so I was looking forward to trying this beer, but I have to say I was let down.

Poured from 22oz bottle into a large snifter.

A: Pours nearly pitch black with a 1finger deep mocha head. Some lacing and retention are present.

S: Roasted malts, sweetness, some chocolate and almost a hint of oak.

T: Delicious roasted malts and sweet dark chocolate then Oak/wood and some coffee at the end along with a tiny bit of alcohol burn on the way down.

O: Wow, I'm impressed. It's sweet, smooth and delicious. Absolutely a must try.

Pours a straight black, thick cloud. Head dissipates rapidly.
Lots of sweet roasted malts, cooked sugar, and some dark chocolate.
I didn't pickup much beyond roasted malt and cooked sugar.
You notice the hop bite and chewiness. Coats the mouth but quickly goes thin.
I don't drink many DIS as it takes me forever to drink. This is a great brew that is good to share.