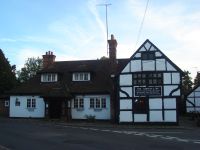 A ramble down Blackheath Lane away from the lovely Villagers Inn soon had RichLightWeight and I at a gorgeously attractive English T-junction, laid out with dark green pastures and punctuated with a wooden seat and a smattering of Country houses partially hidden in the trees. We hooked a left here and continued down Littleford Lane. More countryside rambling followed, happening on a secluded Parish Cemetery between Blackheath and Wonersh, which included a small Chapel, a strange sight and a chance to stop for a short time to absorb yet more of the stunning countryside in the Surrey Hills.

But thirst rules, and we soon pushed on despite leaving behind the tranquility of the graveyard that time seems to have forgotten. The Sun was slowly setting; laying out its outstretched grasping arms over the leafy Surrey countryside.

The Grantley Arms is an imposing roadside Inn which sits at the fusion of three roads; The Street, Wonersh Common Road and Cranleigh Road. A half timbered gabled frontage rises to the right (as you view this Olde Worlde Tavern from the roadside) and it has classic black stained beams and a whitewashed exterior. Leaded windows look genuine. To the left of this, a more recent, but still old, extension adds more mass and presence. Dark red tiled roofs are pitched at 45 degrees and sweep upwards, decorated with a couple of tall brick chimney breasts and punctuated with two gablets or what we would refer to these days as dormers.

A hanging swinging wooden sign is cast far over the roadside and supported by some simple wrought ironwork. This sign still has an original reference to previous owners, the now defunct Friary Meux in its familiar gold text set against a red and dark blue background, set above a Coat of Arms which bears the phrase Avi Numerantur Avorum.

Inside the interior is well upholstered and furnished. The bar area spreads backward and away from the front entrance. To the left a small area contains a handful of tables and chairs. To the right, a small open area in front of the bar gently transforms into a neatly arranged seating area which looks more like a Restaurant, this is accentuated with the presence of blackboards listing daily specials and the fact that these tables all seemed to have Menus on them. RichLightWeight and I decided to take an open booth style table near one of the front windows. A handful of locals were seen to be drinking at the bar, otherwise it was rather quiet in here. The beer range seemed to be very good, it even surprised RichLightWeight and appeared to have expanded even further since his last visit here. Some six different Real Ales littered the bars Beer Engines, including a few local microbreweries as well as the ubiquotous Adnams. I opted for the W.J.Kings Horsham Best Bitter  sadly, despite the good quality of the beer, it was just a massive disappointment, thin and metallic with a disapointing icky toffee finish - though this has been my experience with a lot beer from this Brewery so it was not a reflection on the Grantley Arms. Moreover, RichLightWeights Pint was a palatable offering and to his liking.

We didnt eat here, but it seems like the whole Pub was heavily tilted towards the Evening Meal brigade, however, this does not seem to be at the expense of offering a very good range of Real Ales.

One to keep an eye on, the beer range makes this worthy of a stop-off - just dont order the Horsham Best Bitter or any of the W.J.Kings beers would be my advice.

Grantley Arms, The in Wonersh, GB2, United Kingdom
Place rating: 3.64 out of 5 with 1 ratings