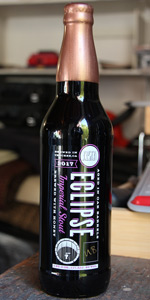 Rated by JPS10 from Texas

Reviewed by howardnss from Pennsylvania

Reviewed by Phineasco from Massachusetts

Rated by StoutElk_92 from Massachusetts

4.25/5  rDev -1.8%
look: 4.25 | smell: 4.25 | taste: 4.25 | feel: 4.25 | overall: 4.25
A: Poured into a snifter to a black beer topped by a dense two finger head which retains well and fades slowly to a collar around the edge of the glass with minimal lacing
S: Smells of chocolate and roasted malts with some coffee and oak along with caramel and vanilla
T: Taste is chocolate and bourbon barrel goodness followed by some wood spice. Hints of corn and coffee along with some slight alcohol and roasted malts. There's a slight green apple skin like flavor as well. Swallow is wood spice, bourbony oak, and lingering chocolate with some slight vanilla.
M: This beer is on the heavier side of medium. It's a little more carbonated than some of the other eclipse beers I have drank but it still has a slightly silky mouhtfeel. Carbonation is still less than prickly which is good for the style while the beer has a drying finish from the ABV.
O: Overall this is a really nice beer. The barrels definitely are a bit more prominent than some of the other variants which is nice. Definitely not a booze bomb though.

Reviewed by IKR from California

4.26/5  rDev -1.6%
look: 4 | smell: 4.25 | taste: 4.25 | feel: 4 | overall: 4.5
Dark brown-black pour goes straight black in the snifter. Just a brief thin film of a head, dark brown, and then it slips away into a flimsy collar. Brief motes trail behind and then vanish. I've had me some bourbon, but never had Willett; I've had a few other entries in the Eclipse series though, and found them to expensive but worthwhile. This one was the cheapest yet, coming in at $23.99 at our recently opened Total Wine. In the past, at other shops, it was always about a $30 bottle.