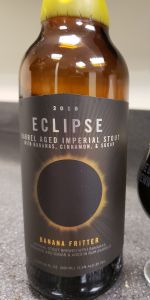 Rated by shehateme from Massachusetts

Barrel & stewed fruits on the nose; banana really comes out after a few moments. Cinnamon imparts an odd tinny bitterness, but the palate features really balanced rum barrel, malt, a touch of spice, and mild banana. Had more potential, but tasty.

Pours a dark brown bordering on black with the brown head 1/3" deep, similar in appearance to every other Eclipse. The aroma did contain banana. It was the leading smell. Behind it is the rum barrel, which FiftyFifty does much better than almost anyone, if not anyone (Cigar City is pretty good too).

Taste gets more complex with the adjunct stuff, sure banana leads the way as it should, but there is this brown sugar meets cinnamon kind of accentuation that works and shows yet another deft touch of hand on these. Did seem slightly boozier and more bitter than your average Eclipse beer. Has a skinny fat sugary end to it.

So, this wasn't as bad as I thought it was gonna be, but it still manages to fall pretty far down the list of overall Eclipse rankings. Still wasn't the worst that year though. I think we might be seeing that review next. If you like rum and bananas though, I would recommend you check this out. Otherwise, too expensive, pass.

Reviewed by IKR from California

Taste: Moderate rum and bananas, caramel/brown sugar, and mild cinnamon notes. The label indicates sugar was added and that might be why this beer does not finish as dry as other variants I've had.

Mouth-feel: On the heavy side of medium bodied with a moderate level of carbonation. Thicker bodied than many of the other Eclipse variants I've had.

Overall: An interesting beer, but for my tastes I don't get banana fritter. Where the German chocolate cake variant did well in mimicking what it is was named after the flavor elements here did not have the same cohesive taste profile.

Reviewed by pkalix from California

2.82/5  rDev -26.8%
look: 3.5 | smell: 3.25 | taste: 2.5 | feel: 1.75 | overall: 3.25
hey Suz! thanks for adding this! where's the F review? beautiful pour! oh... dissipated so quickly.... oh well. aroma has a whiff of ..... tabasco sauce? are you serious? no wait. a different sauce.... um, banana chocolate sundae IF you try real hard.... dude(s), get a clue. ADD some meade like Bottle Logic's Equivalent Dose. that will help. trust me. this one sucks. and i am a TOTAL supporter of Eclipse stouts. honestly. and seriously. wait. do i need to let it warm up some MORE? geez you guys.... do you KNOW what you're asking me to PAY for this bottle? and THIS YEAR you seem to come out with your CHEESECAKE FACTORY selection of dessert beers (versus your normal stouts) as an EXPERIMENT and i have to pay for this crap? (i'm still waiting while my banana fritter warms up) . . . . okay. so HERE is my REAL review.... total disappointment. what has this Eclipse series turned into? was this a GAMBLE (which lost)? my god.... i want a F'ING REFUND. this shit is F EXPENSIVE and i was your GUINEA PIG after Bottle Logic's Equivalent Dose Masterpiece.... this is MORE EXPENSIVE than ED, by the way, and obviously much easier to find.... (should have been my first clue, eh?). so, my TASTE rating is based on much bitterness (and that funky hot sauce flavor) although there certainly IS some banana flavor(ing?) in it. i am SO DISAPPOINTED. check my other Eclipse reviews, please. if the brewery HAS THE BALLS to contact me to offer a refund for this crap i am willing- [email protected] but hey! it's got 11% alcohol so i'll down as much as i can and see where i can get from there because THIS STUFF IS FRICKIN EXPENSIVE AS SHIT..... but seriously A) do you taste 'hot sauce' in this? B) is this what you envisioned when you put this out there? C) will you refund me my money? please? of course not....
Dec 16, 2019
Imperial Eclipse Stout - Banana Fritter from FiftyFifty Brewing Co.
Beer rating: 87 out of 100 with 11 ratings