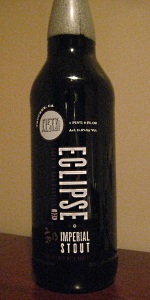 So my review might be a little biased because I'm having this one with two years age on it. Anyway, this beer is superb. Great looking beer with a lovely head and a deep dark black color. Smell of honey and sweet bourbon. Taste is smooth vanilla, honey, some oak, and the bourbon is mellow and perfect. I would drink this beer all the fucking time if it wasn't so expensive. Highly recommend trying this beer with a couple years age on it (even at $30)

Ah, the 2013 Eclipse varieties. I dunno, maybe they made it more than one year, but this is a review of the 2013. I don't remember any other vintages for Maker's Mark Eclipse.

Pours the usual black body and dark brown head between 1/2 and 1/3" deep. Aroma was whiskey, chocolate and oak. Nothing discernably different about this one so far. Taste brings the standard stuff, more chocolate malt, whiskey notes, mild vanilla. Hides alcohol decent, although there is a tiny bit more sting to it possibly. Almost a slight dark fruit raisin note in there. Heftier bitterness comes through in the mouthfeel than the other versions. I think the brewer must have felt the same bc I swear, I don't remember this one coming back in subsequent years. The carbonation is nice and soft but appropriate just like every other Eclipse bottle.

A good beer, but man, at $30 a bottle and on the absolute high end of the price tier spectrum, you better make every one of them be world class, and this was just merely pretty good.

This was poured into a sample glass. The appearance was a thick dark brown color with a nice looking half fingered white to off white foamy head that dissipated within less than a minute. There was barely any lacing. The smell definitely had the bourbon barrel still strong with a light deep caramel malt involved and some milk chocolate running all about it. The taste had a nice sweet bourbon to sweet chocolate running all over my tastebuds. On the palate, this one sat about a medium on the body with not much sessionability about it, but then again, this was consumed as the last beer in the beer tasting tonight. Overall, an absolutely stellar barrel aged imperial stout, well worthy of having again!

Reviewed from notes. Poured from bomber into a Peg's snifter.

A: Jet black and opaque, with a thin light tan head and virtually no visible carbonation.

S: Maker's Mark bourbon (whisky? whatever they want to call it), dark cacao, wood tannins, and vanilla with a slight dark fruit sweetness and tobacco dryness. The sweetness and maltiness remind me of a graham cracker. This is boozy, but without excessive alcohol heat on the nose.

T: Bourbon up front, then cacao and deep dark roasted malts. Vanilla and woody tannins, some toasted toffee, and bits of dried tobacco and musty bound book flavors. More bourbon in the back end with wood dryness and residual malt sweetness in the hang.

M: Medium body for style - far from watery, but not hugely thick and sticky. Alcohol fairly restrained for a barrel-aged imperial stout, and has fairly low carbonation sensation.

O: This was pretty good. I would have been a little more happy with it if it had a bit heavier body and more depth of flavor. It did definitely open up some as it warmed through the drink - but while I enjoy an occasional Maker's Mark on its own, I don't know that it was the best barrel compliment to the base beer. Still quite tasty, but not world class.

Thanks to newbrewbb for the generous gift!. Pours slightly darker than the color of cola with a rocky, quarter inch, khaki-colored head. Some swaths and slashes of lacing present, but exhibit weak legs. Nose is somewhat lacking - dark malts, roast, chocolate and a hint of oxidization, but it all comes off a bit dull. Taste is much more impressive - the Maker's Mark really comes out and the malts, roast and chocolate present in the nose are much more amplified and coalesce nicely into a balanced flavor profile. Mouthfeel is light-medium, perhaps a touch on the thin side, with an even carbonation and only a slight alcohol burn towards the back. Overall, a pretty solid American Double/IS; however, the price point on these beers is a bit too high. Nonetheless, I'm grateful for the opportunity to try it.

22oz, dull silver waxed bottle, run #2 of 2013, and part of a six-pack sort of deal that arrived in Alberta a few weeks ago - not that it's always being sold that way.

This beer pours an expectedly solid black wall, yet with perhaps a bit of muddy cola highlights in the nether regions, and three fingers of puffy, rocky, and truly creamy and foamy mocha head, which leaves some nicely askew cobwebbed lace around the glass as it slowly and evenly subsides.

It smells rather pungently of cocoa powder, the kind that's just been mixed into a healthy (re: double or triple) shot of middle-shelf Bourbon - the grittiness pervades, but I can sort of isolate a bit of vanilla, caramel, and astringent wood fiber, if I really must. The taste is much more rounded in its chocolate essence, the liqueur-like effects of the barrel more alcoholic than Yankee whiskey-borne here, though hints of spicy rye and cooking vanilla bleed through as this deal slowly warms (it's not exactly balmy outside right now, and my house hasn't quite properly heated up yet today, either). A slight, toasted dark fruitiness also arises, to a welcoming pat on the back, alongside some weak woody notes, day-old coffee, and a struggling, seemingly out of its element reduced brown sugar sweetness.

The bubbles are obviously quite effusive up front, but settle quite nicely into a tight holding pattern, the body a hefty medium-full weight, and generally smooth, the tics of char, java, and burgeoning booze indulging, all. It finishes well off-dry, the woody whisky, caramel chocolate malt, and dark sugary fruit providing the outline for today's task(s).

One of the more approachable versions of this shotgun blast of new 50/50 Eclipse barrel-aged, big-ass stouts. If I've enjoyed any Bourbons over the past few years, the red-wax sealed (wait, what? Sigh, no consistency) Makers Mark has been prominent among them. Nice to see that tasty, if somewhat simple, corn whiskey goodness so agreeably imprinted here.

Bottle shared by Lunch. Thanks Paul. Served in my FiftyFifty snifter.

Typical FiftyFifty stout appearance. Near black with a half inch of beige head. The aroma brings the booze right away. Lots of Maker's Mark character. Why be subtle? Fuck it. Ample oak and barrel character throughout. The finish brings a boozy, whiskey sweetness that tingles a bit before a nice, alcohol warmth. Not among the best of the series, but a solid beer nonetheless.

One of the best series out there & jazzed to have another variety to notch up. 22 oz. bottle with silver wax that, thankfully, isn't as granitesque as past years "wax" has been. Split with my wife.

As I continue to school my little girl in the art of beer pouring, I note that this one is as all Eclipse is, black about 97.4% of the way through, with good carbonation. The nose (my little one says "it smells like apples!" & I'm going to have to disagree) is aggressive, razor-edged whiskey, enough to make me think they didn't empty the barrels nearly all the way. Base beer is buried in there somewhere: I imagine more than smell the sweet malts, chocolate, & roast.

Imperial Eclipse Stout - Maker's Mark is wicked. The 'Mark is strong, strong, & is mixed with a charred, almost smokey amount of oak that I don't recall ever tasting in an Eclipse before, & then my fire alarms go off. No, really. Mid-palate the heat & bourbon really take over, much boozier than most of the other variants. Ze finis consists of more char, more bourbon, along with a coating of cocoa, astringent oak/wood, clay tennis court. Did I mention the charred barrel? The first Eclipse I've had that's overcarbed, to the point of distraction, very bubbly for a big stout. And unlike most, a half bomber is going to be enough.

Too much burnt leads to a beer that remind me of scorched portages in the BWCA. Burn, baby, burn. While I like my waffles & toast borderline burnt (at least according to my barely touch heat to them family) even I have limits. Good, but too much of a good thing can chafe, eventually.