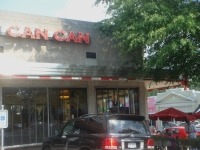 V: Overall, it's a welcoming vibe. They built Can Can to mimic a French bistro, and got it right for the most part. It's spacious without being cavernous, with a long bar running along the wall. The noise level is a bit above average, but this isn't a huge issue.

Q: So far as I can see, they had a high level of quality and freshness with their beers, though I couldn't tell how fresh their bottle selections were.

S: The service was friendly and attentive, though I never quizzed her on the beer selection.

S: A solid, if small-ish selection. They had 8 taps with a domestic leaning: Deschute, Ocelot, Funky Buddha, Commonwealth, et. al. I suppose a French restaurant can be forgiven for stocking a dog like Kronenbourg on draft. They also had a few bottles, including some Belgian standards (Chimay, Trappist Rochefort), and other domestics (Oxbow, Brooklyn). On the whole, pretty good.

F: The food was excellent - particularly the croque monsieur - and prepared quickly.

Had a nice lunch with my (87 year old) dad on a recent visit to Richmond. He's not a big drinker and not a beer drinker at all, and I was driving (basically visiting all the places my dad lived in and around Richmond as a child in the Depression) so only had one beer, a Hardywood Park Singel on tap.

But the menu was typical French brasserie (he had lamb crepes, I had a hangar steak, both very good if not great, the crepes a little on the cool side and the hangar noticeably though truly just slightly underseasoned, $13 for the crepes and $16 for the hangar; on the recommendation of a customer on the patio as we stood outside looking at the menu, we both had a cup of the onion soup, I believe $3 if ordered with an entree and not just good but excellent) and the beer list, though not a long one, was packed with Belgians or American takes on Belgian styles, and Virginia breweries--Hardywood Park and Legend and Devil's Backbone and Blue Lab and the place in Roanoke--Railhouse?--IIRC.

I think that's a great way for a French-themed "brasserie", whose primary focus isn't necessarily beer, but wants to do beer well, to do it. Next time I'm in Carytown I will definitely return, hopefully for a session as opposed to just one beer.

I put "$$--reasonable" because to me a lunch ticket of under $50 including tax but before tip, for those entrees, with a cup of soup each and a $7 beer and a lemonade, just doesn't quite reach "$$$--a bit pricey" but I included exact prices, so judge for yourself.

Oh--there are hottie West End twenty and thirty-something rich girls all up in here too. Also their forty- and fifty-something very well-kept Windsor Farms/CCV mommas.

I stopped in here for brunch on a Sunday at noon and this place was slammed inside and outside. Service was still pleasant and quick, and the inside decor had a nice feel but I ate outside on a beautiful June day. Beer selection is good and they rotate it a little; just didn't earn higher marks for limited selection (but this is a restaurant with good beer, not a beer bar restaurant). Ordered crepes and they were delicious, although it is kind of hard to screw up crepes. My wife ordered a cheeseburger and it was so-so. I'd like to come back here again but two beers and a little brunch set me back almost $50, so this place will cost some major bucks.

Stopped in this place by accident on a recent business trip to Richmond. I was looking for a nice place for dinner and this well-appointed spot just down from Carytown Wine & Beer looked like a decent bet.

I expected a decent wine list but when I received the menu I was pleasantly surprised that the taps and bottle selection were ably selected and featured a range of beer styles, including several Belgians.

I had the Monday mustard crusted salmon special with a Dale's Pale Ale and was pleased with how the two went together. While the waitress knew wine but not beer, she did note that the bartender complemented me on my selection. We chatted a bit about matching food with beer and wine and I pointed out that most wine would have a touch time pairing with the pungent mustard flavors of the salmon dish.

If you are in the mood for an upscale dinner and want a beer selection to match, this is one of the better places I have come across in my travels to pair the two.

Great little place to grab breakfast or lunch, or brunch on weekends. Dinner is a little pricey but Im sure the food is good then also. Location is pretty good, look for the only "strip mall" on Cary street and park in there if you get lucky. Once you are done you can go down a few doors to Carytown Wine and Beer. During the warmer months this place openes its massive windows and makes it like a real little French place, very nice.

The beer selection was surprising as this looks more like a hoity toity place for the carytown folk to be seen at. There are 8 taps, all of which were micros. The server seemed to have an understanding of them and reccomended the correct beer to go with my meal. There are also about 20 bottles, a mix of Belgians and seasonals.

The food has been great each time I have been there, very consistant. They bake their own bread and you can tell the difference. I reccomend the steak sandwich.

Can Can Brasserie in Richmond, VA
Place rating: 3.99 out of 5 with 10 ratings