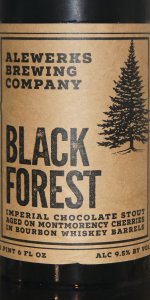 Notes: Inspired by the famous dessert, this beer recipe developed from barrels of unusual history. The imperial chocolate stout is aged in oak touched by Bourbon and brandy; Montmorency sour cherries are added to the barrels, and the result is a genuine dessert course in a glass. Hints of bourbon complement a creamy sweetness, as well as distinct notes of cherry, chocolate, and vanilla.
View: Beers | Place Reviews
Reviews: 20 | Ratings: 49 | Log in to view all ratings and sort
Reviews by cjgiant:

Bottle dated 3/2017:
The beer ours a dark brown, and has one of those "fizzy heads" that some barrel-aged beers have. Head doesn't build high, but is a nice brown. Wish is stayed instead of hissing and fading. Even worse, no ring along the edge, even.

Nose is nice, although it highlights the additions and processing more than the base beer. There is a chocolate malty base, but there is also the barrel and the whiskey that combine with that. The tart cherry is what is really nice and brings the nose up a notch. If the chocolate was a little more bold and/or sweet, I'd think the namesake dessert impression would really shine.

The taste doesn't bring the chocolate up front, as that is occupied the barrel and whiskey. Next comes the tart cherry, but even that comes with a little heat. The feel is lighter than many dessert beers, and the warmth from the alcohol makes up for relatively low carbonation. The chocolate does finally come out in the end, without sweetness and leaning a little towards cocoa.

The beer could actually use a little sweetness to go after the dessert, though I am not sure the brewers were shooting for that. The impression may be what they were shooting for. The alcohol is a little too much on this one still, maybe that will mellow, but as of this tasting the interesting non-barrel notes are a tad masked.

From the bottle, it pours a dark brown, almost black, with a nice thick light brown head that slowly diminishes as you watch. In the nose, it is a bit of vanilla, some cherry, alcohol and malt. In the mouth, it is vanilla, cherry, and roasted malt.

A: The beer is jet black in color. It poured with a light tan collar around the edge of the glass.
S: Light aromas of dark malts and cherries are present in the nose.
T: The taste has flavors of whiskey along with notes of cherries and hints of dark, roasted malts.
M: It feels medium- to full-bodied on the palate and has a moderate amount of carbonation.
O: This beer does a very good job at blending the whiskey with the cherries and malts in the taste.

Poured hard from a large bottle into a snifter glass, forming a few fingers of frothy brown head that soon faded to some lacing and a heavy ring. Effectively black color. Smell is bourbon and a hint of cherry. Taste is some chocolate and cherry up front with mild bourbon at the end. Very good, not too intense or sweet. Medium bodied with moderate carbonation. Very tasty dessert/bourbon aged stout.

Good strong stout. Pours a dense brown color with a small dark tan head. Head retention is average for a high .abv beer. Some lacing on the pint glass. Aroma and taste feature malt, cherry flavor, bourbon barrel flavor and some milk chocolate. The malt and the cherry are the strongest elements. The bourbon flavoring adds richness to the brew without overpowering it. It is pretty much in the background. The chocolate is noticeable but mainly adds richness also. Mouthfeel is rich with some tartness from the cherry flavoring and some sweetness from the malt and chocolate. This beer is pretty smooth as well, except for some warming alcohol presence. A fine stout, I would drink this again.

A: This poured an opaque black with a little tan head.
S: It smelled like rich dark chocolate and smoky espresso, with some oak and molasses.
T: It tasted like rich dark chocolate and smoky espresso, with some vanilla and oak and a hint of cherry. It had a clean bittersweet aftertaste.
M: It was thick with a little carbonation. Nice slick body.
D: This was a decadent brew with well integrated scent and taste, but not as much cherry as I hoped. The body was solid and the finish was smooth, with well hidden alcohol, so it was easy to drink. No need to age, but it could last a few years. Quality drink but not top tier.

New Beer for 2018.
Black with short liver brown head and no lacing.
Aroma is mostly barrel-aged imperial stout with the usual W’burg sweet bourbon character. The chocolate is not subtle but their is no cherry aroma. There is plenty of burnt caramel, raisin, toffee, and vanilla.
The flavor is solid and right in line with W’burg’s other BA offerings with sweet bourbon notes and solid base beer with medium and darker caramel, prune, and chocolate. The cherry is much more evident in the finish with warming, mostly cherry pie tartness without overt fruitiness.
Feel is smooth with a bit more carbonation than previous offerings from this brewery which improves the drinkability quite a bit.
Very good barrel aged beer, a bit steep in price for the product ($19/4-pack) but glad I tried it.

Poured a black body with minimal tan head and has a boozy aroma with notes of chocolate covered cherries. The boozy, cherry edge is under a good chocolaty sweetness and a little too sweet/unbalanced for my liking and a tad one-note but it's enjoyable.

L: Had this beer on-tap at Capital Ale House - Innsbrook, poured into a snifter glass. Had a jet black color and a thick consistency. There was a 3/4 inch, creamy, tan-colored, fairly long-lasting head. Very good lacing.

T: Tasted of a good shot of bourbon (and the accompanying barrels), a tinge of coffee (not overly prevalent), lots of chocolate, some cherries, and a little malt. This is a pretty forceful flavor. The bourbon seems to take center stage, but the chocolate makes a strong showing, as well. Robust and flavorful.

F: A decent amount of carbonation with a sharp finish. Full-bodied.

O: This is a well made, easy to drink stout. Very much worth a try.

A: Dark black with a dark tan head.

S: Lusciously dark malt with caramel, molasses, and vanilla. Nice oak smell in there as well, not getting much of the cherries though.

T: Big oak and bourbon flavor with vanilla and caramel, some brown sugar notes, and perhaps just the hint of tartness and fruit in the finish.

O: Delicious dark malt flavor, bourbon flavor is pleasant, though I could do with more... I could also deal with a little more of the cherry flavor. All in all, a pretty solid brew.

The beer pours a pretty nice and bubbly tannish brown head that dissipates at a moderate pace while the beer itself is a nice and opaque milk chocolate black with a bit of a brownish hue to it.

The beer has a heavy body but with a thinness to it from the barrel aging. There is a slight syrupness to it but is faint and gets lost quickly. The carbonation gives it a nice bite and the beginning but quickly disappears.

Overall, a pretty good stout that is probably better in the colder months with a fairly complex mixture of notes.

Appearance: The body is black and there is a light khaki head that forms right after pouring but slowly fades out to a creamy textured ring. There is not much in the way of lacing. Be careful when pouring because a small snake of foam started to form at the top of my bottle after opening.

Aroma: Alcohol. Pure, unadulterated alcohol. If I can linger around the surface of the glass long enough I start to pick up a little bit of wood but this beer has a hugely overpowering alcohol aroma.

Taste: A strong alcohol character hits the palate at first. It is a bit like drinking a strong mixed drink. There is a bit of a chocolate liqueur flavor but it is underlined heavily by this strong, woody, cedar flavor. The aftertaste is a strong dark chocolate.

Mouthfeel: Although there is a chocolate liqueur flavor the texture does not match; it is much sharper and drier. Every sip is ended abruptly with this dry woody finish. The dryness does not complement the chocolate well. The tongue is left writhing in tannin.

Overall: The beer states that it is an "Imperial Chocolate Stout aged on Montmorency Cherries in bourbon whiskey barrels." Aside from the alcohol and a light bit of wood from the barrels, I picked up none of this in the aroma. The flavor largely focuses on chocolate and the strong alcohol flavor that could be a part of the base beer or could be a part of the whiskey barrels. Overall the beer just feels too dry and that really hampers the drinking experience. While the label might make you believe this is a decedent and luxuriously smooth beer, this is in fact a very dry beer with a lot of tannic pucker. This, along with the prevalent alcohol flavor, makes the beer a difficult one to enjoy. There also was not any cherry flavor or aroma at any point while drinking this beer. This might be a beer to age for a long time in an attempt to see how well it mellows but it isn't one I would drink again.

Great looking beige head on this midnight black beer with a nice solid curtain of lacing. Nose is heavy chocolate, maybe a touch burnt, with a little cherry on the edges. Dig a bit further and the alcohol becomes apparent. Taste follows suit with burnt chocolate and alcohol being the initial impression. A little more warmth provides a touch of vanilla. There’s a slight tartness throughout, which turns out to be the cherry influence. Not a big bodied beer as the alcohol really thins it. Finish is dry with tartness and a hint of dark chocolate left on the tongue.

T -dark chocolaty malt up front, followed by light undertones of cherry and caramel, boozy whiskey barrel to close it out

O- For an imperial stout is seems thinner with the adjuncts subdued at times. Worth a try but wouldn't seek out again