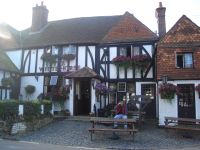 View: Place Reviews
Reviews: 1 | Ratings: 2 | Log in to view all ratings and sort
Reviews by TheLongBeachBum:

After a superb Pint at the Compasses in Gomshall, a brisk walk soon had BA RichLightWeight and I through the village, past the quaint but working Gomshall WaterMill, and up over the gentle rolling hills on our way to the next village of Shere, which dates from Saxon times, and of course our next Pint.

Despite the return to Greenwich Meantime only hours earlier, it seemed like we couldnt be further from Winter as we walked slowly down the dark lush green hills into Shere, both we and the village bathed in a fresh warm sunlight backed by pastel blue skies and the bounds of the English Countryside. The thick hillside forest was soon penetrated by something man-made yet divine; the tops of the surrounding trees could not hold back this aged place of worship. As we got closer to Shere the parting foliage soon revealed one of the finest timber spire frames in England in all its glory. Soon we were rambling into the classic old English village of Shere and passing the 12th Century Church which appeared in the Doomsday Book of 1086 under Essira, with the Church most certainly having roots that predate the Norman Conquest. This was living, breathing history, but we were still thirsty nonetheless.

The White Horse is nestled right off the small village triangle with its Sir Edward Lutyens designed Memorial to the Fallen of Two World Wars freshly decorated with flowers in advance of the Remembrance Sunday (2 weeks hence from our visit). The exterior of The White Horse has a black and white half-timbered look, red and black tiled roofs at various angles, bespoke red brick chimney stacks, leaded windows, nicely arranged flower boxes, small hedges and a cobbled frontage complete with picnic seating and a set of stocks. The White Horse was built in 1425 and was a former Smugglers Inn, reputedly having its own ghost. Rumor has it that timbers from Nelson's ship, Victory, form the beams in the restaurant. The background could not be more English.

Inside, the low ceilings, dark woods and dark carpets project quality, the suited staff behind the bar and waiters lend a high end feel also. The White Horse is a part of the Chef & Brewer group; an outfit more notable for its acquisition of older Inns & Taverns with a high emphasis on food and not so much on beer. Thankfully though, the range of Ales on offer was more than enough to satisfy the thirst of two fat old walkers. Cask beers tapped up were Hogs Back T.E.A. (Tongham English Ale), Charles Wells Bombardier, Adnams Broadside and Courage Best. The White Horse is Cask Marque accredited also so that should in theory guarantee a decent enough pint. Whilst RichLightWeight opted for a half, I took the opportunity to imbibe a full Pint of the Hogs Back TEA, and it was in fine form, so much so that I supped it in double quick time and it disappeared before RichLightWeights half!!

Now completely non-smoking, it has a healthy attraction for those walking, cycling and driving tourists that seem to be heavily enticed by the neighboring creeper covered 16th Century cottages, Antique shops, Art stores, Cafés and a small Shere Museum too.

It is absolutely incredible to think that sat outside this marvelous Country Pub that we were less than twenty miles from London and yards from a village Church that has been a place of worship, to various Gods, for well over a Thousand Years. The village of Shere itself is well worth a visit on its own merits, and whilst the White Horse is a place of historic interest, it cannot really lay claim to being a great beer bar, but it certainly offers a selection of Real Ales that befits its English heritage and surroundings, including the local Hogs Back TEA which is the recommended beverage of choice whilst sitting outside and marveling at one of the most photographed villages in the South of England.