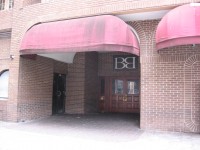 Bottom line: this is a good place to see a show and the crowd's are usually hyped up, like it was this past weekend when I visited. I don't know why it is on this site though, because other than Hoegarden and Framboise Lambic this bar just has regular domestics. Also, you're paying top dollar for the privelege of being downtown Orlando. I have nothing against the staff, but they kicked my buddy out for arguing and then kicked me and my friend out too for being with him. I won't really bother coming back unless I am in town again and I KNOW a good band is playing.

bad experience for me the last time i went to backbooth, which was about 2 months ago. The bands were amazing but the bar just sucked. Ever since the old manager Andy left, the place just went to shit. The taps are terrible now, and extremely unimpressive. The beer was old/flat, and the bar staff didn't seem to care about it. their liquor drinks seem to have been underpoured, or maybe i just couldnt get the taste of stale beer of my palate. the bar appeared to be understaffed as well, ie no barback or another bartender, etc.

the only thing that i would recommend is seeing the bands that play there. but drink a sixer in your car before hand.

I first went here when I was in town for a conference, last year, and was crazy about it. It seems overly easy to meet people, especially when united in the love of great beer and 80s music.

There is a relatively small bar to the right, when you walk in the door, that is almost always staffed by at least two people. As a testament to their service, the most recent time I visited, I got a Delerium Tremens on tap that must have been old, or line, or something, because it just wasn't that good. I told them about this, and they got me another drink for free, even though it was busy.

There's a sizable dance floor, flanked by two stages on either wall, reaching up to the second floor, where there are numerous tables. Around the bar itself, customers crowd in to get drinks, including pulls from their very impressive tap selection, which is the best I have seen in the area.

Maybe I've just been a little happy whenever I've gone, but the total has always been just under half what I thought it would be.

On Pine St, in between the Bus Station and Orange St. No sign up front, just a sideboard with flyers out front of a recessed entry with a double BB with the second B backwards over the door. Sometimes there is a cover as they have some type of entertainment every night.

Atmosphere - The word Oxymoron comes to mind. There is a strange dichotomy at Back Booth, their is mostly a College crowd to late 20's. There was a $5, or free with College ID, which included free PBR or well drinks. There was a DJ playing a strange mix of music. Then there are 27 taps of amazing beer selection. Also, very dark and very smoky. It was unlike any place I had been to before. But, everyone was also very friendly and I never felt out of place. Except when I had to go back to the hotel at 10:30 after a Saison DuPont and Delirium Tremons (both on draft) because I had a meeting at 6:30AM and people were just starting to really come in. I met a few of the locals who were very nice and friendly. Had some interesting conversations over great beer.

Quality: Top notch. 27 taps with the only real mass produced beers being PBR, Bass, and Newcastle. None of the Big Three on tap. Oh, and the staff actually knows about the beers, well at least some what. A very hot, early twenties college girl knew enough to pronouce Raison d'Etre right and tell me it was a Belgian style beer and went into talking about the beers on any of the tap handles I couldn't see from my vantage point. They had 3 DFH, Saison DuPont, Delirium Tremons, 2 Rogues, 3 Shipyards, 2 Boulder Brewing company, some Left Hand and Tabernash, and several others.

Service: Great, no complaints. The staff knew what they were talking about. They were friendly and accomidating. They even had some of the proper glassware. Granted they served the Saison DuPont in a Chimay glass (which I'm sure would have made VENOM's skin crawl), but they actually had Delirium Tremons glasses and I saw several other different variaties.

Food: I don't think they serve food, but they might.