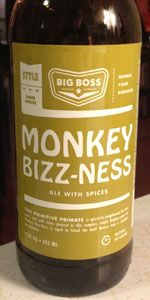 One of my favorites from Big Boss, although after trying many other saison/farmhouse ales, this brew reminds me more of a Belgian strong ale....regardless, it's a really solid effort and an excellent summertime treat!!

Pours a hazy, orange  with a couple of fingers of head, with small, uniform bubbles moving along the sides of the Big Boss pint glass. Pleasant aromas of bananas, sour apples, caramel, and the trademark Belgian yeastiness on the nose. The taste closely follows the nose, but the sour apples tend to be the most dominant, with the hops bringing a  subtle, dry finish, that is reminiscent of saisons.  This is such a highly drinkable beer, but at 9% abv, it's one that will creep up on you. I just hope these guys do their wood-aged version, Wooden Monkey, before too long....and a bourbon barrel-aged version would be a welcome variation as well.

Just opened a 2015 bottling. This has aged very well. Nice spicy aroma, good head (disappeared quickly). Right on the edge of overcarbonation, but acceptable. Beautiful amber color. Excellent flavor, almost boozy but I like this style. Very nice beer, need to get more (live 5 min from Big Boss, they better have it!) Highly recommended.

Poured from 12 oz. bottle into pint glass. It pours a cloudy orange-amber with a thin, milk-white head and lacing. It smells of Belgian yeast, coriander, pear, and a whiff of caramel. It has a nice, fruity taste of apple, pear, and banana, with coriander, clove, and pepper. It finishes with a nice peppery bitterness. This ale is medium-bodied, heavily carbonated, and it punches with an ABV of 9%. Overall, there is nothing subtle about this Saison. The flavors are strong, as are the carbonation and ABV. If they could be toned down a bit, this would be a nice Saison.

Taste: Sugar cake infused with toffee, up front, with fruity flavors developing (pear, banana and a touch of apricot); peppery spices build in the middle, bringing holiday tones of clove, cardamom and ginger, as well; yeast phenols arrive in the finish, though the sweeter tones linger

Overall: Found this summer seasonal in the back of the fridge and this makes for a nice holiday beer, just the same; not that much of a farmhouse character, though; more of a spiced BSPA

It was a very hot day, my daughter had brought a six-pack of North Carolina locals back from a trip there. I only had one Monkey Bizz-ness in the 6 and it was an incredible start to the taste test. Not a single, of the other 5 local NC brews, stood up to this one. Working on getting more....great beer!

I'm a big fan of local NC brews... I always give them a chance, they've got the guts to live the dream and brew for a living. I've had Big Boss brews I liked a lot more than this one... It's too thin for the style, not enough flavor or carbonation. That being said - it could be the draft here is off - wine maestro in Statesville, NC. I'll always give NC brews a second chance. Support local beer!

The pour was a murky dark apricot orange with an average (1-2 finger) off white creamy head that was mostly lasting, reducing to a large puddled film and medium collar with good spotty lacing.

The aroma was of sweet biscuit malts and a funky Belgian yeast with notes of toffee, coriander, a somewhat pronounced fruity ester (apple, peach and banana) and a definite presence of alcohol.

The taste was extremely malty sweet with a note of toffee at first, and then proceeded to have a strong presence of yeast, a bit of fruitiness with a mildly spicy and bold alcohol finish. The flavor hung around for an average time with the yeasty fruitiness giving was to a strong sweet alcohol warming sensation...

Mouthfeel was just about medium in body and a tad syrupy in texture with a good lively carbonation.

Overall this was a pretty good brew with the strong yeast flavor and fruity esters blending very well with the sweet malts. However I feel the high ABV that is quite prominent in this brew, was a bit too much…

I may have gotten a bad batch, but it was right after a release party, so I don't know. Anyway, I can definitely see where they got the name but this beer was flat. I mean it had no head and no lacing after the pour and I poured it fairly aggressively.

I probably gave it too high of marks, but I have been to the brewery a few times and was overall happy with what I have tried there, but this one was not so great. Maybe it was the alcohol that killed it but, it was not sudsy, even Dupont was foamy.

Appearance: No head whatsoever, but the color is glorious.

Smell: I can tell that is where the get the name from, lots of bananas in the profile, sweet, almost cloyingly sweet.

Taste: fruit, bananas, but some other fruit in the taste, but not as much as you find in other saisons, and no funk, which I like, overall this was a disappointing beer. It clings cloyingly to the mouth and not in an enjoyable way at all. Sickening, maybe this one had died but I was not impressed.

Pours a near copper body beneath the foamy, off-white head which dissolves to leave almost no traces of its existence. Hints of yeast and lively bubles of carbonation continue to dance about the glass.

Zesty fruit such as lemon peel, hints of pepper, perhaps grass, and a touch of yeast highlight the aromas.

The flavor is much more spiced, and fairly well. The fruit is more subued, but there also seems to be a toasted malt quality in there. As advertised, the yeast is rustic tasting and perhaps there is just a hint of grapy must.

Medium in body with generous carbonation and a drying, spritzy finish.

Not a bad brew. Not sure it's spot on for any style be it Saison/Farmhouse or otherwise. Seems to have quality of a Belgian Pale as well, but certainly one to appreciate.

I wasn't too familiar with this style, but tried it on tap in Raleigh after a friends wedding. I loved the spice characteristics I tasted. I felt like this could be a good "christmas" beer due to the spices, though I believe it is only available during summer. Appearance was a nice golden color with a decent head.

I agree with my friend's wife that this is a beer to watch out for, if you don't pay attention you will get far more inebriated than you expect.

On tap at the brewery's tasting room

Pours a pale gold with a thin lacing of head. Nose is subtle straw. Taste is wheat with mild spices; clove and coriander. Light bodied and lightly carbonated.

I was excited to try this beer as it's one I hadn't had before, but I can't say it was all I hoped for. I did not detect any spice characteristics that I would associate with a saison; more like a belgian pale or belgian strong pale.

Draught @ brewery. This one pours a fairly clear, golden with a tinge of orange color. There was a small off white head that leaves just a bit of lacing. The aroma is good. There are notes of earthiness, malt sweetness, fruit, floral and spices. The taste is very good. It is just slightly sweet, earthy, spicy, very faint fruits. A nice brew.

Sampled at Charlotte Oktoberfest in a sampling glass.

T - Belgian spices with a mild sweetness and a definite presence of alcohol. No sourness at all.

A: light gold color. cloudy and hazy. one finger white head, no lacing

T: some sweetness and fruity. also can taste a little bit of spiciness. no alcohol is noticed as the fruity esters dominate the palate.

Drinkability: not a type of beer that i would drink a lot of, but i would get this beer again.

Sampled at Tyler's Durham in a standard pint glass.

T - Belgian spices with a strong sweetness (too much in fact) and a definite presence of alcohol. No sourness at all. I thought it was decent but unbalanced and confused. The flavors seemed to be coming from all over without much regard for each other.

D - In the neighborhood of a Saison / Farmhouse Ale but raw and not very clean. Maybe this one needs more time. A decent beer but not one I'd try again.

Swing-top growler poured into a Duvel snifter a hazy pale orange with a nice off-white head that diminishes to a ring and leaves slight lacing. Aroma is a nice blend of sweet malts, orange peel, slight citrus and a touch of booze. The taste is a nice crisp complex blend of sweet malts and spice with just a hint of sourness, a bit of citrus hops make their presence known while keeping a low profile. The beer is medium bodied with a decent alcohol presence that is not overbearing at all, the beer still possesses all the refreshment you expect from the style. I've always looked forward to the release of Surrender Monkey, and even under its new name, this one doesn't disappoint. I'm looking forward to the bottle-conditioned bombers that are coming in the next few months.