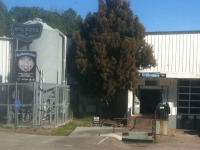 Airplane themed brewery, with what looks like the hulls of old military planes decorating the walls. I think the beers are all named after them as well. We only tried 2 beers; one was good and the other great. They had pool, ping pong, and other games in different rooms around the place.

A very tasty brown ale, great flavor, smooth all around, Made in NC!

Was in town for work and went to the brewery on a Wednesday night. It was pretty dead but it was extremely cold and I wasn't expecting a lot of people to be out and about. Did the flight and then had a few pints. All of the beers ranged from decent to good. Nothing amazing but all pretty good quality. The brewery/taproom had a pretty cool layout.

Favorite local brewery for many years.

Monday early evening in October. Sat upstairs in the cozy/small tap room considering how big the building is from outside.

Had the Kolsch, 7% Belgian Blonde, Wit, and a pint of the very clean IPA.

Nice beers. Plan on going when it's nice so you can sit outside on the patio.

Raleigh, it seems, has a pretty decent beer scene despite it getting a late start on the movement. I visited Big Boss with my fiancé and her sister about a year ago, and was pretty happy with the spot. They don’t serve food, but it’s a pretty cool location with several different rooms, cozy furniture, wood everywhere, and some bar games to keep one occupied. Even their lighter beers – heffe, wheat, etc. – are pretty tasty. But I recommend the Bad Penny.

You know, I wasn’t initially super impressed with this place, but after finishing some other pretty crappy reviews, I have to admit that Big Boss was more than up to snuff.

On the outskirts of the capital city of North Carolina, Big Boss sits in an industrial park in a facility big enough to house their large operation. They’re not all that interested in food or in running a restaurant, but that’s okay because they run a really cool bar. The tap room is charming, with really well-done Big Boss posters and memorabilia. Whoever their graphic designer is does a very good job. There’s a tiny bar in one room with a lot of space to spread out. Different rooms house a couple of dart boards, a couple of pool tables, and a short shuffle board table along with some tables, chairs, and sofas. It has a very nice, relaxed, laid back atmosphere for regular Joe’s, and I dug that about it.

They don’t really have any food to speak of, so moving on…

Their beer really is quite good. When I went, they had seven varieties available, including their five standards. They run that gamut from light to dark, featuring Hell’s Belle (Belgian), Bad Penny (brown), Angry Angel (kolsch), Blanco Diablo (wit), and High Roller (IPA). Of these, the kolsch and wit are surprisingly delicious, especially seeing as how I don’t usually gravitate towards those styles. And yet, here I did. Of course, I would have drank gallons of their Aces & Ates, their seasonal coffee stout, but it was 8% and I didn’t want to get hammered.

There’s not really any service to speak of, since there are no waiters and only one or two bartenders. But they are nice and friendly and happy to answer questions. Hey, a knowledgeable staff that knows that they’re selling. Imagine that.

I have only been to this Brewery once a few years back; however, I was pleasantly surprised when I arrived. If you have never been there, then you could possibly miss it. The establishment has a unique feel with airplane parts, pictures of old airplanes and the ceiling surrounded with bottles and cans. A nice place to visit and enjoy a few!