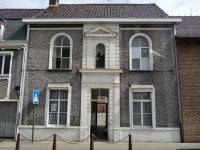 Notes: Set up by two friends and a Brother-in-Law who started brewing beer in a barn at a local farm. Went commercial in 2003, but with no capital the beers were brewed on the Brasserie Caulier Plant. In February 2006, the decision was taken to move production to the Flemish SA Deca Brewery in Woesten-Vleteren (working) parts of which date from 1917. Exports its beers to Canada, Denmark, Italy and the USA with plans for China, India and Australia in the beerline. Brewed 30hl in 2003, the plan for 2006 is 300hl.
BEER STATS

A-De Struise is located behind a nondescript building front in Oostvleteren, a small village in Flanders. Upon walking through the building front and into the old school yard, you wonder if you are in the right place...the only giveaway that this place is brewery is the palate or two of bottles and odd pieces of brewing equipment laying around. Once you get into the classroom, however (it is literally an old classroom with school desks and chalk boards), things feel more normal. There is a wall with perhaps 20 taps and some tasting glasses and a few people mingling around sniffing and sampling. It turns out those taps pour all different types of De Struise beers including a number of works in progress or beers that have long since been discontinued...awesome. There are a few other beer tourists (one couple from California, a British gentlemen, and a pair of guys from Germany that were kind enough to share the wine they made with everyone). The vibe is friendly, sort of strange, laid back, and inviting.

Q-We tried perhaps a half-dozen different brews and all were great or close-to-great. The sours, in particular, were delicious, as were the better-known quads. I did not notice any guest taps, but the sheer power of the De Struise taps was more than enough to warrant a high ranking.

Ser-The gentlemen who assisted us was inviting, friendly, quick to offer a refill, and very knowledgeable about all of the beers on tap. We could have sat around for hours chatting beer with him and sampling.

Sel-I was pleasantly surprised to see so many taps on the wall and then to learn that many were experimental or out-of-production. The selection of bottles to purchase was more limited, but I didn't worry about that after my half-dozen free tasters. The large number of taps gave De Struise a more modern feel than many of the other Belgian breweries with the limited selection.

V-It doesn't get much better than unlimited free samples. The prices for the bottle sales were also pretty reasonable.

The place is opened only from 2 to 6 pm, it's not easy to spot, you really have to know where you're going, the decor is minimalist, but man ! Was it worth it !

Around 30 beers on tap which you can sample in 3oz glasses for 1€ each. That's what I did and managed to taste about 15 in 4 hours.
You can also get 12oz glasses if you wish.
The man at the bar spoke 3 languages and was very knowlegeable.
Great ambiance !

A must if you're in the region.

Very cool spot with short but sweet hours. 30 beers on tap with 8cl tastings for 1€ each with an incredible line up including their 26% eisbock

Through a small opening you enter into what looking like a building site, but is really the brewery terrace laid out with tables & chairs and a couple of guys cooking up burgers. They are welcoming and point you into the right direction to the tap room, where there is 20 taps to choose from. A corridor provides a space for the range of 9 or 10 different bottles to be displayed. The beer is that good I brought 1 of everything.

I visited De Struise after a trip to Westvleteren (which is only about 10 minutes away). The place isn't easy to find unless you know where to look, as it's through a walkway and across a concrete courtyard, with no signs on the road. The tasting room was much smaller than I expected, with no bar to sit at, just a few tables crammed with serious beer enthusiasts. It's basically one room of an old schoolhouse. So you're in elementary school, but drinking high octane beer.

Massive beer selection, with styles of all types, and a few options from other breweries as well. De Struise is, in my opinion, one of the more experimental breweries in Belgium, if not in all of Europe, and here at the taproom, you can really witness that fact. They had Messy on tap, which was a unique treat. Yeah, look that one up...a 39% eisbocked Black Damnation.

Service was basic. A guy serving beer. Urbain unfortunately was not there during my visit, as he was at a festival somewhere. A shame, because I did want to meet him.

You're definitely going to want to try to hit up Struise if you travel to (or live in) Belgium.

Located in Oostvleteren, in an old school. Actually very hard to find, because of the lack of any signs. You actually enter a regular door, which leads to courtyard, from which you finally enter the school/brewery.

The taproom is located in a classroom with an authentic panel painting, showing the brew process. The atmosphere is very cosy, abandoned old school benches and tables are still standing there, where you are now able to enjoy your beer. You can also sit in their courtyard when the wheather is sunny, go to the next butcher and join a barbecue. They promise to have about 30 beers on tap, which contains a good range of their beer, you can decide between three different glass sizes, 8ml, 15ml and 33ml, which is very comprehensible, taking into account that they serve beer with an abv between 3.5 - 26. They also got some bottles and glasses for takeaway, but don’t rely on their internet site, as they don’t seem to care to hold it up-to-date.

I love this place and it's my favorite stop when I make my yearly beer run to this part of Belgium.
It's cozy, relaxed and a great place to meet other people who share the same love for craft beer. They have a big tap where they always have several of their beers on tap and you can sample them for a very reasonable price.
The times I've been there they're always very friendly and their available beers range from low in alcohol to very high in alcohol....and with high, I mean high:) It's a good thing they have small sampling glasses.
Every time I've been there one of the owners is there and he's always keen to explain stuff or answer questions.
In short...go there. You won't regret it. If I had to make a choice between stopping here in Oost Vleteren OR in West Vleteren...then this is where I go. But of course...you should visit both;)

On a side note: If you want to buy some beer to take home this place may be a hit or miss situation. Sometimes they have several nice beers...sometimes you're just bumming:)

De Struise Brouwers in Oostvleteren, Belgium
Brewery rating: 4.23 out of 5 with 11812 ratings