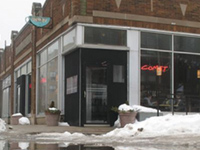 Checked into the Comet Cafe after a stop next door at Bullseye Records, on a recommendation from the folks over at Green Gallery.

A total doppelgänger interior, night/day setup of a bar half and a diner half. Scratches both itches I guess, or maybe just appeals to different crowds. On the bar side, brown naugahyde booths are along the wall, under wildlife scenes of geese and beavers. Narrow chairs at the bar with a flatscreen or two. Even with these modern touches, it still felt like something out of Ghost World or Twin Peaks.

Service was attentive, it seemed like there was a shift change going on with several staff members around. One surly guy was cutting fruit/etc. in front of us, occasionally cursing someone late on the next shift. Oh well, the beer was good, and so was our bartender. Large hipster contingent in this area, as identified by earlier reviews...

Atmosphere- diner on one side, bar on the other. Love the design. Gets cozy but not uncomfortable. Eat at the diner counter, in a booth, or at the bar. Something for everybody.

Quality- expect a good beer selection from good craft breweries. Some macros in cans as well. Food is locally sourced.

Service- servers and bartenders have always been awesome and friendly here.

Selection- 10-ish taps and about 40 cans? Usually there is a beer or two I'd like to try on tap. If not, the food is so good that I can be satisfied with a can of Dale's Pale or a bottle from Central Waters. Occasional awesome beers like ZD, Hopslam, Black Husky.

Food- Well made. Locally sourced. Expect heaping quantities (read: share) and lots of cheese/deep-frying/grease. That being said, the best meatloaf in MKE. Some GREAT vegetarian options, too. Sunday night is bacon basket night- free basket of bacon with a drink purchase. Be forewarned- I think it's deep-fried.

Value- great bang for your buck. You'll leave full with left-overs. Beer prices are right on target and you can often get a happy hour deal.

Stopped here for a hangover brunch in between Brewers games. The bloody mary was the best I've ever had. The beer selection? Okay, but nothing special.

The place was packed at 10:30 AM on a Wednesday, so I'd imagine it'd be pretty hard to get into during the weekend. The vibe was hipstery, and again that would probably intensify at night so venture in at your own risk. During our visit it was fine. But I know stuff like that can get quickly out of hand for some of y'all.

Personally, I don't got nothing against hipsters. Especially foodie hipsters, and especially when those foodie hipsters are making me food. Good god, the food here was excellent. The best poutine I've ever had in the states and a vegetarian breakfast platter that was to die for.

But the beer--like I said, the selection ain't nothing special. They do a good job of displaying it--each beer is given its own trading card, and the "menu" is a leatherette booklet containing said cards. But the selection wasn't all that special. (Signs did make mention of a semi-exclusive beer club that met periodically to share rare, cellared beers, but this news was of little use to a tourist like myself) Still, there was a beer for nearly every mood, and taking that into account along with the quality of the food, I'd call this place a borderline must-visit.

I enjoyed this place mostly because of its access to where I was staying. friendly environment,though there are ven friendlier ones in the city. a couple of bars and tables, enough room for me but i can see where it can get very crowded on the weekends. Only a handful of taps, and that rarely changes, for example 3 Floyds mild is always on. A good bottle selection, but then again almost everything available in the stores. Reasonable prices. Again, location was the best part of this for me, as well as being reasonable safe part of town.

Stopped in here last night with a couple BA buddies for dinner.

Typical diner look and feel. Tap handles and chalkboards with beer specials are the only clue that it's more than a typical greasy spoon.

The beer list is pretty solid. Not and amazing tap list but the bottle list is quite long. I come here for the food mostly. It just so happens that I can enjoy a top tier craft brew with my entree. Speaking of the food. It is top notch. Homestyle comfort food any grandma would be proud of.

Service is always a touch slow but nothing I can't overlook.

Overall a great place for down home cooking served with a great beer.