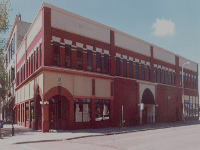 Reviewed by luxbwin from North Dakota

2.05/5  rDev -23.2%
vibe: 1.5 | quality: 2 | service: 2 | selection: 2 | food: 3
All through college I have gone to the OB. The OB is actually 3 bars in one location. The OB is nothing spectacular; this is a club not a bar. The bar area and sports bar are not bad. However, the selection is low in all three bars, and the food is overpriced for what you are getting. The pizza and the wings are typical bar foods in the sports bar, and they have nothing that I would write home about. The OB lounge is decent; the sweet potato fries are the staples of the menu. The club part of the bar has no food, but they have some pretty okay FREE popcorn.
The beer selection is lackluster. I would rather go to the liquor store down the street to get more than 10 choices for beer.
I would say unless you are looking for a place to dance with sweaty college kids, look elsewhere than the OB.

2.84/5  rDev +6.4%
vibe: 3 | quality: 2.5 | service: 3 | selection: 3
I have gone to this place a few times and I think it is more of a club. On Friday and Saturday night the place is packed with college people. They do have a nicer bar area that is connected to the dance/party area where most of the people are. There main beers are Miller Lite, Michelob, Leine's Honeyweisse and Sunset Wheat. They have some decent deals on their tap beers.

I personally like the bar area a lot better. They have a few better beers on tap, like Fat Tire (not the best, but it's a step up) and a lot of bottles. It takes forever to get a drink though, because it is always so busy in there. Excluding their specials on the less-quality beer, most of their drinks are a bit pricey for the night life.

4.2/5  rDev +57.3%
vibe: 4.5 | quality: 4 | service: 4.5 | selection: 4
My original notes read, Kudos to whomever initially added this place [to BeerAdvocate.com]! In the interim, thanks to a purge of old, un-reviewed places, it got bumped from the database. Crap! Fortunately, I took copious and detailed notes, so I was able to get it re-listed and am thusly the first to review it.

It was located right on the corner of Broadway and Northern Pacific Street, within a stones throw of the BNSF (Burlington Northern & Santa Fe, for those non-railroad buffs among us) train tracks, which enabled me to watch a freight train chug past as I was my way into the joint. Better still, it was just up the street from Greyhound and the Fargo Ground Transportation Center, making it highly convenient for me to visit.

I entered through a long vestibule that was oriented at an angle to the street and the corner. Once inside, it was like stepping back in time. The long, L-shaped, dark wood bar was at a right oblique to the entryway and the m.d.s. was just inside of the door. The floor was a black and white tile honeycomb pattern; jazz played from the P.A. system; the waitstaff was smartly dressed in white tops, black pants, some with white aprons, and some with ties (as a side note  if I ever owned a bar, that is how I would want my staff to dress); Tiffany-style lamps lined the well of the bar; there was lots of vintage advertising; they had a pressed-tin ceiling; there were hanging lamps and chandeliers, as well as rotating ceiling fans; and stained-glass panels above the street. It all added up to create a certain ambiance. The back bar was a marvel  it was a huge wood affair, with arches and pillars, that ran almost two-thirds of the length of the place. The back bar also included two flat-screen televisions, one on each end, as well as two brass tap towers and a wine dispenser/cooler in the middle. There were booths along the window and left walls and high tables in the center of the space. They offered free peanuts as bar food, which was a nice touch. The waitstaff continued to attract my attention throughout my visit. Finally, a Flying Fickle Finger of Fate, carved out of wood, hung from the overhead and pointed to an exit off to the left. I took the hint.

As to beer, they had six taps, but the selection threw me at first: Leinies Honey Weiss; Leinies Berry Weiss; Newcastle Brown; Guinness; and Summit Pale Ale. Uh oh. But then, I asked to look at the Beer Menu, which listed sixty-six imports, thirty-two micros; and 16 BMC products. The imports featured a lot of the standard lagers, but also some quality English beers, like Samuel Smiths and Germans, like Paulaner Salvator and Spaten Optimator. The micros included Anchor, Goose Island, Summit, Boulevard, and Rogue. I was happy with it and you will be too, if you should occasion to visit.