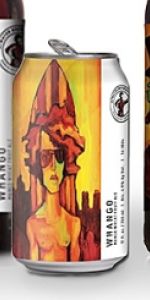 Notes: Tropical paradise in a bottle. Get your mouth ready for the perfect balance of mango sweetness and refreshing wheat flavor. Clean and crisp on the tongue, fill your vessel with this laid-back sipper and set sail for the Isle of WHANGO. It was brewed to overwhelm but never overpower. Welcome to the jungle, baby.

A- A normal pour creates 1-finger of off white head atop a hazy, golden-yellow body. The head drops rather quickly to a thin film. There's a light lacing left behind, though much of it slowly dropped into the body.

S- Very fruity. Lots of tropical aromas, obviously the mango, but I could mistake it for a peach, melon, nectarine sort of thing. A delicate, wheat aroma plays second fiddle.

T- Interesting. There's a cream of wheat flavor with a kick of mango. The mango really Amos up in the end and overtakes the base beer attributes. Not bad if you're into a fruity beer, but it goes beyond an accenting flavor and is a little too overwhelming in my estimation. A little, black peppery bite creeps in toward the finish.

M- Medium-light, with a carbonation bite.

O- Not quite my style, though I could see it refreshing after a lawn mowing session in the summer heat. Probably not going to seek it out, but I could see picking up a sixer for a summer BBQ.

Happy New Atwater Brewery Beer Sunday (Week 664)! Each week, I try to gather several beers out of my backlog from one particular brewery for a brewery horizontal. This week is the exceptionally hit-or-miss Atwater Brewery from Detroit, MI, beginning with this entry for The CANQuest (tm).

From the CAN: "Mango Wheat Ale brewed with natural flavor"; "Pairs with: Good Friends. Good Food. Good Times."; "Born in Detroit. Raised everywhere."; "We make the kind of beer that we love. Unaplogetic craft lagers and ales brewed with Detroit pride for people who enjoy great tasting beer. We're not seeking the approval of anyone else. We're just a group of hard working, beer loving folks that get to bottle our enthusiasm every day and share it with the world."

At last, an opportunity to CANduct a Crack! & inverted Glug. This action produced two fingers of dense, foamy, rocky, bone-white head with good retention that actually left good lacing in its wake. Color was a hazy Yellow-Gold (SRM = 4 - 5). Nose had the by-now unmistakable tropical fruitiness of mango along with the tang of wheat. Mmm. Mouthfeel was kind of thin & watery, but not unexpectedly. The taste was decidedly fruity, very evocative of mango, but it was also quite sweet & even a little perfume-y. I wish that they had given the wheat more free reign to help offset some of the inherent sweetness. Finish was semi-sweet, but still very refreshing. It would be a nice quaffer on a hot, humid summer's day.

Pours a cloudy blonde hue with a thin head into my glass.

Sweet and crisp with a nice whiff of mango.

Finishes clean with toasty mango (as I describe it).

A very refreshing brew. This was included along with 11 other beers that I sampled from MI recently.

I picked up a bottle of Atwater's Whango for $2.09 at The Lager Mill. It's been a little while since I've tried a new beer from Atwater and I'm interested to see how this one turns out, so lets see how it goes. 2016 Vintage. Poured from a brown 12oz bottle into a weizen glass.

A- The label looks nice, it's got a weird look to it and it's eye catching. It poured a hazy burnt orange color that took on more of a golden orange color when held to the light with a fingers worth of bubbly off white head that died down to a thin ring that eventually faded away and it didn't leave much lacing behind. This is a decent looking beer, but I wish it had better head retention and lacing.

S- The aroma starts off with a slightly higher amount of medium sweetness with a big mango puree and mango juice like aroma being the first to show up and it's followed by some sweetness with only a little bit of a doughy, wheat and grainy aroma, but other than that the aroma is dominated by the mango. This beer has a pretty nice aroma, but I wish it had a little bit of balance to it.

T- The taste seems to be pretty similar to the aroma and it starts off with a higher amount of medium sweetness with the mango still being the first to show up and it's a little lighter than it was in the aroma, but it still imparts the same nice aspects. Up next comes the malts which show up a little more this time and more of a wheat, grainy, pale malt and doughy aspects come through this time and they bring a little balance to the taste. On the finish there's no bitterness with some sweetness taking it's place and there's a nice mix of mango and wheaty malt flavors in the aftertaste. This is a good tasting beer, it's got good balance and the mango comes through nicely.

Overall I thought this was a pretty nice beer and a nice example of the style, it really lived up to being a mango wheat beer and while it wasn't too balanced in the aroma the balanced really started to come out more in t he taste and it made for a nice beer. This beer had nice drinkability, I could drink a few of these when it's hot out and I would recommend it to anyone looking for a wheat beer with a good amount of mango in it. What I like the most about this beer is the taste, it's good and it's very well balanced. What I like the least about this beer is the appearance and mouthfeel, they both could use a little work. All in all I liked this beer, it's a good summer time beer and it stays true to it's description. It's one of the better Atwater beers I've had and it's above average for the style. Nice job guys, this is a tasty summertime beer.

Usually Atwater beers do not impress me in the least. Of the twelve I've consumed, i'd only bother returning to two of them. I was actually handed this. Don't expect much but we'll see.

Look - Mildly murked golden hue with a finger and a half of white head that sticks around pretty well and leaves a decent lace upon a finished glass.

Smell - Well wouldn't ya know it basically smells like mango juice and wheat, met half and half in the middle of each.

Taste - Yep. Exactly as the nose implied however the mango juices take a much more obvious stronghold over the wheat BUT the wheat does not once get lost in the crowd and remains tastefully apparent.

Overall - If you rate this to style ot achieves exactly what it set out to do. If this were an IPA with this flavor profile achieved through hops over artificial flavoring, it would sit much higher for most. I, however, rate to style and overall enjoyment of a beer. I liked this and would have zero problem throwing back a twelve pack of these on a full moonlight night around the pool. I think next time around they should ditch the wheat and add another fruit. Wouldn't mind seeing this one given a multitude of experimental variations. Try it out.

I've read this is supposed to be a Witbier... is it? Uh, I think BA's description of fruit beer is more accurate. Straight up mango juice with a "meh" wheat-like base. I guess for Atwater's standards it's decent, but there's no reason to come back to this. Just not very pleasant to drink with so many better fruit offerings out there.

First had at the Ann Arbor Summer Festival, Michigan, on draft into plastic beer cup. An effort at balancing the added mango fruit with wheat spice and hop bite, but a little too juicy for me. Still, nice on an Ann Arbor summer evening.